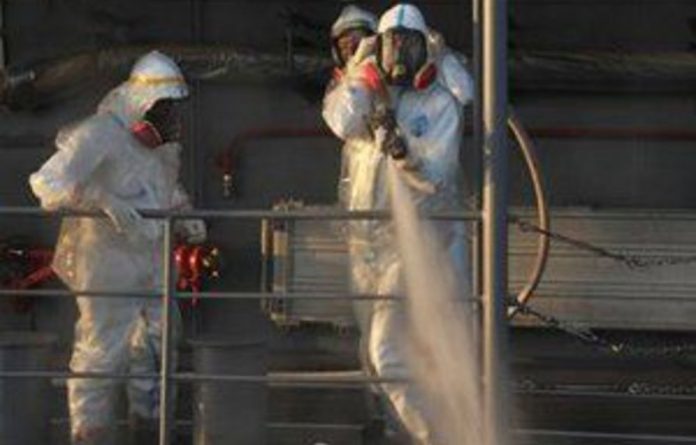 Anti-nuclear protesters took to the streets of Tokyo and other cities on Sunday to mark six months since the March earthquake and tsunami and vented their anger at the government’s handling of the nuclear crisis set off by meltdowns at the Fukushima power plant.

In one of the largest protests, an estimated 2 500 people marched past the headquarters of the plant’s operator, Tokyo Electric Power Company, and created a “human chain” around the building of the trade ministry that oversees the power industry.

The accident that led to radiation and contamination fears spurred widespread calls for an end to Japan’s reliance on nuclear power in the quake-prone country.

Protesters, marching to the beat of drums, called for a complete shutdown of nuclear power plants across Japan and demanded a shift in government policy towards alternative sources of energy.

Among the protestors were four young men who declared the start of a 10-day hunger strike to bring about change in Japan’s nuclear policy.

“I believe it is very important that the young generation voices opposition against nuclear power and in order to bring our point across we need to put ourselves on the line and that’s why we chose to hunger strike for 10 days,” said 20-year-old Naoya Okamoto.

Japanese media reported similar protests in other cities across Japan on the day many offered prayers to those who died in the March 11 disaster.

Yoshio Hachiro — appointed only a week ago in the new government of Prime Minister Yoshihiko Noda — provoked anger when he called the area around the crippled Fukushima nuclear power plant a “shi no machi” or a “town of death”.

Witnesses have also said that after his visit to the nuclear plant, Hachiro made as if he was rubbing his jacket against a journalist, while making a remark to the effect that “I will infect you with radiation”.

Hachiro’s remark and apparent joking about radiation were widely seen as insensitive and immediately prompted opposition parties to demand Noda dismiss him.

“If you were thinking about the feelings of Fukushima local residents, you wouldn’t possibly act like that,” said Shigeru Ishiba, a senior member of the leading opposition Liberal Democratic Party.

The “town of death” comment was seen as particularly outrageous because the government cannot provide evacuated residents with a firm timetable for their return.

Visits
Noda visited the north eastern region that was devastated by the March 11 quake.

Noda, visiting ravaged Miyagi and Iwate prefectures for the first time since taking office a week ago, inspected the port city of Kesennuma — one of the most severely damaged communities on the Pacific coast.

Escorted by local officials, Noda walked around an area flattened by the monster waves that left only concrete foundations behind and where weeds have begun to sprout.

“I saw how massive the tsunami force was with my own eyes,” he said, according to Jiji Press. “I would like to see proposals from local residents so that we can help them rise again from this.”

After inspecting the destroyed facilities of the Kesennuma fish market, Noda promised to local officials that the government will “reflect your needs and opinions on such measures as special economic zones for reconstruction, subsidies and the third extra budget.”

Rallies planned
A day ahead of the anniversary, survivors in Soma in Fukushima prefecture held a memorial ceremony for the 459 people dead or missing from the city.

“I promise to address the reconstruction with all my strength and all my heart,” said Fukushima governor Yuhei Sato as he stood in front of a stage full of white chrysanthemums.

Yamamoto held similar memorial events in Chernobyl, which experienced a serious nuclear accident 25 years ago, and Indonesia — the nation hardest hit by the 2004 Asian tsunami.

Gravitas: Velenkosini Hlabisa brings his experience to his new post as leader of the Inkatha Freedom Party.
Read more
Environment