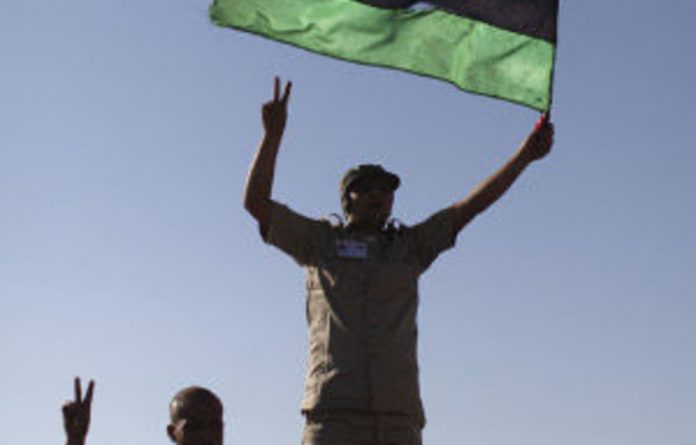 Libyan fighters launched an assault on one of the last bastions of ousted leader Muammar Gaddafi while the head of the provisional government arrived for the first time in the capital and warned that the fugitive former leader still posed a threat.

Fighters poured into the desert town of Bani Walid on Saturday after a deadline set by the National Transitional Council (NTC) for Gaddafi strongholds to surrender expired. Scores of men loyal to the fugitive leader put up resistance.

The provisional government, which is trying to establish its control over the entire country and restore normal life, announced that it could restart some production of the oil that underpins Libya’s economy within three to four days.

Bani Walid, 150km south-east of the capital, has emerged as one of the final holdout towns for Gaddafi supporters making a stand after NTC forces overran his Tripoli headquarters in late August.

Anti-Gaddafi fighters believe one or two of the ousted leader’s sons may be holed up in the town. Some NTC officials have even suggested Gaddafi might be there.

NTC fighters have had the town under siege for days and said they would assault it on Saturday if it did not yield. Fighting broke out a day early on Friday both there and near Gaddafi’s hometown of Sirte, one of the other few holdout cities.

NTC fighters said they had fought to within 500m of the centre of Bani Walid on Saturday, but pulled back suddenly. Nato aircraft struck at least seven times at Gaddafi loyalist positions around the town, witnesses said.

Black plumes of smoke rose from surrounding areas as powerful explosions echoed across a rocky valley in Bani Walid’s northern outskirts. A rocket fired by Gaddafi loyalists landed in the hills, kicking up clouds of dust.

“Field commanders have told us to retreat because Nato will be bombing soon,” fighter Abdul Mulla Mohamed said, driving away in one of dozens of vehicles leaving the town.

“All our troops have retreated because of Nato. We are waiting for orders from our comrades to go back in again.”

Nato confirmed its aircraft were flying missions over Bani Walid but would not comment on any airstrikes.

The main NTC positions on the northern approaches to Bani Walid came under fire, with sniper bullets and shells whistling over military pick-up trucks scattered around the narrow valley.

“We are not far from liberating Bani Walid,” Daw Saleheen, a representative of the NTC’s military council, said. “We urge Gaddafi fighters to lay down their weapons. You can go to any house and will be safe. It is not too late.”

Two NTC commanders were killed and two wounded in the fighting. Doctors said two Gaddafi soldiers and one NTC fighter were killed on Friday. Abdullah Kanshil, an NTC official, said four or five civilians had died in overnight fighting.

Kanshil said about 1 000 Gaddafi supporters were defending the town — far more than the 150 NTC officials previously had said were there.

Oil to flow again
As battles raged for the last towns still outside its grip, the NTC pushed ahead to assert its legitimacy.

It called the arrival of its chairperson, Mustafa Abdel Jalil, in Tripoli on Saturday “historic”. Abdel Jalil, a former Gaddafi justice minister who had run the NTC from the eastern city Benghazi, was greeted by scores of flag-waving supporters.

“Brotherhood and warmth — that’s what we will depend on to build our future. We are not at a time of retribution,” Abdel Jalil told reporters on his arrival.

“This is the time of unity and liberation.”

The NTC has said it will complete its move to Tripoli from Benghazi by the end of next week — though previous forecasts have been followed by delays.

Establishing a unified interim government in the capital would be an important achievement in a country where opponents of Gaddafi are divided along regional and factional lines.

The interim authorities also are anxious to show they can restart an economy almost entirely dependent on oil. Production essentially stopped since the start of the six-month civil war.

The interim oil and finance minister, Ali Tarhouni, told reporters some oil production would start again at some fields in just three to four days, and full pre-war output levels would be reached within a year.

Diplomats said Britain plans to submit a draft resolution to the UN Security Council early next week to start easing sanctions against Libya and establish a modest UN mission in the country.

The International Monetary Fund also chipped in on Saturday, recognising the NTC as Libya’s legitimate governing body and saying it planned to send a team there when it is safe enough.

But Jalil said they must still capture Gaddafi’s last strongholds before they can declare Libya “liberated” and set the clock ticking for elections and a new constitution.

“Gaddafi still has money and gold. These are the fundamental things that will allow him to find men,” he said. “We must focus on our abilities to liberate Bani Walid, Sabha and Sirte.”

The front lines around Sirte appeared to be quieter on Saturday after Friday’s fighting. The NTC has also been sending hundreds of fighters south towards Sabha, the Gaddafi stronghold deep in the desert, in the last two days.

Gaddafi’s own whereabouts remain a mystery. Hisham Buhagiar, the military coordinator of the NTC’s hunt for him, said on Friday he had indications his quarry was in or near the town of Birak, some 700 km south of Tripoli. Nato forces had bombed the area late on Thursday, he said. – Reuters