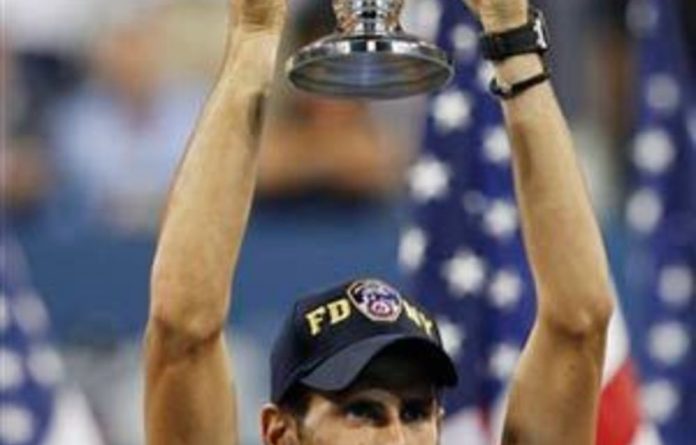 Novak Djokovic matched his nearly perfect season with an almost flawless performance in Monday’s US Open final, returning brilliantly and swatting winners from all angles to beat Rafael Nadal 6-2, 6-4, 6-7 (3), 6-1.

In a final full of lengthy, mesmerising points, the No 1-ranked Djokovic claimed his third Grand Slam trophy of 2011, improving his season record to 64-2 with 10 titles.

“In big matches, the winner is decided by small margins, a couple points,” Djokovic said. “I guess the winner is the one who believes in victory more.”

“I’ve had an amazing year, and it keeps going.”

Against No 2 Nadal this season, Djokovic is 6-0, all in finals: three on hard courts, including Monday; two on clay; and one on grass at Wimbledon. Djokovic also won the Australian Open in January, and is only the sixth man in the 40-plus years of the Open era to win three major titles in a single season.

“I’m disappointed, but you know what — this guy is doing is unbelievable,” Nadal said.

Addressing Djokovic, Nadal added: “What you did this year is impossible to repeat, so well done.”

Aiming high
With a couple of months left this season, Djokovic can set his sights on the best win-loss record in the modern era: John McEnroe went 82-3 in 1984, although that only included two Grand Slam titles, because he lost in the French Open final and didn’t enter the Australian Open. Roger Federer was 81-4 in 2005 with two majors, exiting twice in the semifinals. Rod Laver (twice) and Don Budge are the only men to win all four Grand Slam tournaments in a year.

Djokovic agreed, saying “it just clicked in my head”.

“Through the last couple of years, I didn’t change my game in any major way. Most of the strokes are the same they were last two three years. But I’m hitting shots that maybe I wasn’t hitting … I’m going for it.”

He entered this year with one Grand Slam title, at the 2008 Australian Open. He attributes his surge to a variety of factors, including a vastly improved serve, better fitness — owing, at least in part, to a gluten-free diet he doesn’t like to discuss in any detail — and, mostly, a seemingly endless reservoir of self-belief dating to December, when he led Serbia to its first Davis Cup title.

Djokovic began a 43-match winning streak there, a run that ended with a semifinal loss to Federer in the French Open semifinals. The only other blemish on Djokovic’s 2011 record was a loss to Andy Murray in last month’s Cincinnati Masters final, where Djokovic stopped playing while trailing, citing a painful shoulder.

That was the 24-year-old Serb’s last match before heading to Flushing Meadows. His shoulder was fine in New York, clearly, and while he was treated by a trainer for a bad back, a rib problem and cramps in his legs in the late going Monday — which is why his serves slowed to the 90s mph in the fourth set — he overcame it.

With both men playing fantastic, court-covering defence in a gruelling contest that lasted 4 hours, 10 minutes, there were more than two dozen points that lasted at least 15 strokes.

Nadal won three major titles himself in 2010, including beating Djokovic in the US Open final, but this rematch was more of a mismatch as Djokovic quickly turned things around after falling behind 2-0 in each of the first two sets.

Those were tiny deficits compared to what he dealt with in the semifinals Saturday: He lost the first two sets to Federer, then faced two match points at 5-3, 40-15, before taking the last four games.

By backing up that victory on Monday, Djokovic became only the second man to defeat Federer and Nadal during the course of one Grand Slam tournament. Juan Martin del Potro did it en route to the 2009 US Open title.

Broken
The only time Djokovic truly faltered at all in the final was in the crucible of the third set, when he showed signs of being bothered by his lower back. His level dipped, and Nadal made one last stand. Djokovic went up 3-2 only to get broken, then served for the match at 6-5 and was broken again when he made two unforced errors, the second at the end of a 21-stroke exchange.

After being outplayed in the tiebreaker, Djokovic was massaged by a trainer while face down on the sideline. More treatment came after the last set’s first game, then after the third, with Djokovic also taking pills for the pain.

“When I lost that third set, it wasn’t fun,” Djokovic said. “I knew I wasn’t physically there.”

But in the fourth set, Djokovic was in control from the start, breaking in the second game with a forehand winner, then cruising from there.

When Djokovic ended it with another forehand winner, he raised his arms, then tossed aside his racket and dropped to the court. He pulled off his shirt and threw it into the stands, then put on a hat with Fire Department of New York written on it — a nod to Sunday’s 10th anniversary of the September 11 2001, terrorist attacks.

Of all of Djokovic’s skills, the one that separated him the most in the final was his return. He repeatedly sent serves back over the net and at Nadal’s feet, forcing errors or taking control of the point, helping Djokovic accumulate an astounding 26 break points and convert 11.

Consider this: When Nadal completed his career Grand Slam by winning last year’s U.S. Open, he was broken a total of five times in seven matches.

Another telling statistic: Four times Monday, Nadal broke Djokovic — only to have Djokovic break right back in the next game.

That’s exactly what happened in the third game of the second set, which lasted 17 minutes and featured a bit of everything: 22 points; eight deuces; six break points; a time violation warning against Nadal (Djokovic was admonished later in the set); complaints by both men that the glare from the Arthur Ashe Stadium lights was bothersome; seven exchanges that lasted at least 10 strokes.

After a 28-shot point, Djokovic leaned over and put his hands on his knees, his chest heaving. Nadal was the one who faltered, though. He double-faulted to set up break point No 6, then — on a great defensive lob by Djokovic — put an overhead into the net.

Djokovic disguised shots well, rearing back and ripping big shots off both wings. He wound up with 55 winners — 23 more than Nadal.

“It was a tough match. Physical, mental, everything,” Nadal said. “It was a quality match.” — Sapa-AP