Bakkies to return for Bok game against Fiji 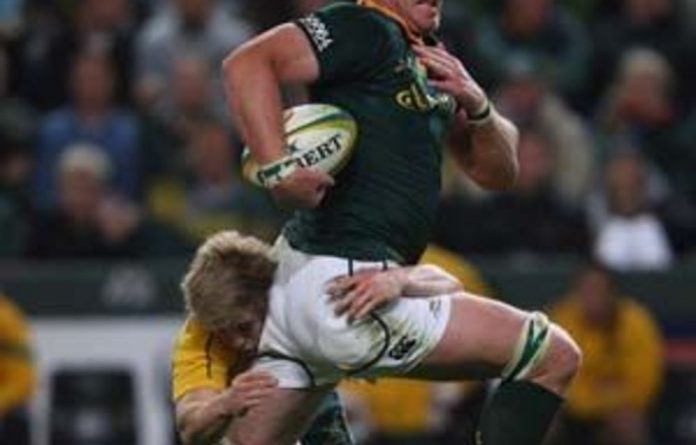 A week ago there were fears that he may not feature in the Rugby World Cup, but Springbok lock Bakkies Botha has since made a miraculous recovery from an Achilles injury and is now ready to roll.

“I still feel a little bit of a stiffness, but it is like that old farm vehicles in the morning, it smokes a bit, but if you drive it half an hour around, then it is hot and it can go, so hopefully everything will run smoothly for me,” Botha said on Thursday.

On Monday Springbok team doctor Craig Roberts said that he doubted that the big lock forward would be fit to play this weekend, and that he was far more concerned about him than the other players that picked up injuries in the team’s 17-16 victory over Wales.

“He [Botha] hasn’t responded as well as we anticipated, we are still working on it and we haven’t made a decision in terms on how we are going to continue with him at this stage,” said Roberts.

On the same day that fellow lock Johann Muller, who was included on the bench for Saturday’s match against Fiji, limped off the field with a hamstring injury, Botha managed to run with less discomfort.

“I just gave it a go on Tuesday morning and I was just happy to go thought the training session, so I’m back and I’m quite happy where I am,” Botha said.

He also had no doubts that he would be back to his normal physical levels.

“I know I am ready for this weekend, so it doesn’t matter what happened on the positive side or the negative side. I truly believe that when you pull on a green-and-gold jersey you must give 100% and that is what I’m gonna give.”

Bok locks
Looking ahead to the challenge of facing a team that loves to give the ball some air, Botha’s teammate Schalk Burger said that Fiji’s locks are just as fast as some of their wings.

The man who is known as the Enforcer said that their pace does not concern him.

“I saw their No. 4 went down the touchline against Namibia and dummying inside and pop passing for the scrumhalf or the wing, but we know Fiji has that type of players from No. 1. They are very versatile and athletic, but we are just going to stick with what works for us come lineouts, scrums and as long as we just stick to our plan and what we want to do this weekend and do it to 100% of our ability. We believe we can have a good day at the office.”

What will be a very rare situation for the Bok lock, who is due to earn his 76thcap, is that he will be partnering Danie Rossouw in the second row.

This leaves the Springboks with two of the most intimidating locks in world rugby at their disposal.

The question, however, will be whether the defending champions will be as dominant in the lineouts as they usually are when Victor Matfield is in the team.

Boks go for tried and tested
South Africa have made four changes to the run-on team that recorded a 17-16 victory over Wales last week as they prepare to take on Fiji.

Injuries were cited as the reason for most of the changes in the team named on Wednesday, and by selecting Frans Steyn to start at centre, the title holders have gone back to what worked so well for them at the previous World Cup.

Bok coach Peter de Villiers said he included the Racing Metro centre to beef up the team’s midfield defence, which looked vulnerable at times during their opening match.

“We can’t allow for the same thing like on Sunday when that channel [in midfield] was exposed on defence,” De Villiers said.

“We need a strong guy there to stop it and not give them any momentum.

“You look at the opposition and see what the strengths and weaknesses of your opponents are, and you look at what they offer to us.”

New blood
De Villiers said they could take positives from the changes, some of which were made as part of the squad’s rotation policy, but most of which were due to injuries to key players.

Bok captain John Smit had an opportunity to work with younger players, De Villiers said, while others would get some much needed game time.

“We have a few injuries and everything works out for the good, so I think it is a brilliant opportunity for John to blood in some of the other players,” De Villiers said.

“One of the fears that we face is that some of the players did not play in a very long time.”

Included in the last line of defence was Patrick Lambie who had only recently recovered from a shoulder injury.

The Boks lost Victor Matfield to a hamstring injury, and possibly Johann Muller, who was to undergo a late fitness test, which left South Africa in crises as far as second-row forwards were concerned.

Botha on for Matfield
The Springbok coach defended his decision to field Botha, who missed their opening game.

“We will never take risks with players, especially when their lives are at stake,” De Villiers said.

“Throughout the World Cup there will be niggles in each of the squads.”

If Muller, who was named on the bench, was unable to play, he would be replaced by Francois Louw.

Odwa Ndungane would step into the left wing berth in place of Habana, Pat Lambie was set to start at fullback, and Francois Steyn moved forward to fill De Villiers’ inside centre berth.

James’ place on the bench was taken by the versatile Ruan Pienaar.

Gurthrö Steenkamp was promoted to start at loosehead prop in place of Tendai Mtawarira, who dropped to the bench, while the return to a conventional four/three split between forwards and backs among the replacements opened the way for Juan de Jongh to make a first appearance on a Rugby World Cup team sheet. — Sapa