Bring on the new broom 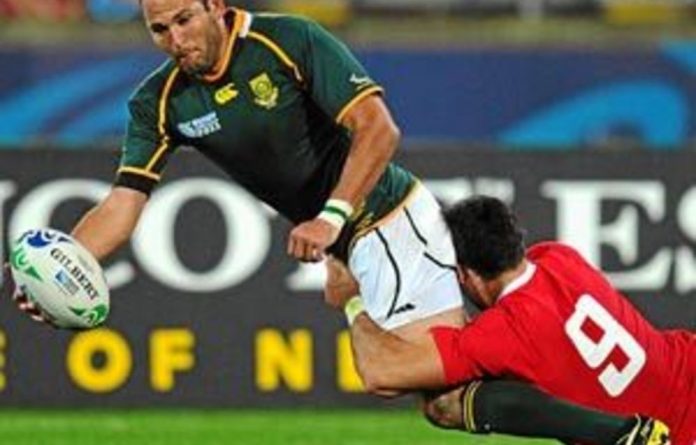 The first week of South Africa’s campaign to defend the Webb Ellis Trophy has been dominated by injury news.

Wednesday’s team announcement notwithstanding Bakkies Botha may already be on the plane home by the time you read this, while Victor Matfield, Jean de Villiers and Bryan Habana will all miss Saturday’s match against Fiji in Wellington.

A worrying trend of downplaying injuries runs through Springbok media releases this year. Johann Muller and Heinrich Brussow were both rushed back for the away leg of the Tri-Nations in July. Daily updates insisted that they would be available for selection soon, but were being rested from training as a precaution.

In the event, both were flown back home without seeing action, so there was a certain dj vu about a release this week which said: “Johann Muller also sat out training on Wednesday with a tight hamstring, but has not been ruled out of contention for selection. He will be assessed nearer to kick off.”

It is unfortunate timing to lose both Matfield and Botha at this early stage of the tournament, but if either can indeed be rehabilitated ahead of the knockout phases then now is the time to rest them. Habana’s absence will not weaken the side as significantly, since Francois Hougaard, who replaced him against Wales, seems a better option than the Western Province flyer right now.

Hougaard’s preferred position of scrumhalf enables him to clear the rucks that Fourie du Preez cannot reach. It is even possible that Hougaard will be the first-choice scrumhalf by the time the quarter-finals roll around, which would allow Habana back into the starting 15. That’s because Du Preez is clearly far away from the world’s best scrumhalf that he was before last years shoulder operation.

We have been waiting all season for Du Preez to rediscover his form, but Sunday’s display against Wales was his worst ever in the green and gold. The precision kicking from the base of the rucks was gone and the once matchless cover defence was replaced by a retreating ditherer who made more errors in his own 22 than in most of the rest of his Test matches put together.

Unfair to the team
Du Preez’s deficiencies were exacerbated by the absence for much of the game of De Villiers and Matfield. It might seem unfair to the rest of the team, but the majority of the thinking that goes on during Test matches is done by those two gentlemen. Matfield is the lineout guru, of course, but he also excels in troop deployment at close quarters. Without his hand on the rudder the pack was fragmented against Wales.

As for De Villiers, he must be wondering what he has to do to compete at a World Cup. In 2003 he was seriously injured in the final warm-up game before the Boks left these shores. In 2007 he lasted for 44 minutes of the opening pool match against Samoa before tearing a bicep muscle and flying home. This time it’s ribs, and not the kind that they sell at Spur.

De Villiers has his critics who say he is too slow, but that is simply not true. Moreover, he is the cerebral heart of the backline and the perfect foil for Jacque Fourie, who calls the defensive pattern. De Villiers’ replacement against Wales was Butch James, hardly like for like and necessitated by an unnecessary 5/2 split between forwards and backs on the bench.

Francois Steyn takes De Villiers’ place in the team to play Fiji. There is a suspicion that Pat Lambie may end up there before the tournament is over, but he will be at fullback on Saturday. Steyn looked sharper against Wales than he did in the Tri-Nations, but perhaps that was only due to a productive trip to the barber. His try in the first five minutes was as well constructed as anything the Springboks have managed all year, but that was as far as it went. There was a long wait for Bismarck du Plessis to replace John Smit deep into the second half before a new dynamic could be discerned.

Much as management might wish to go through this tournament with wise old heads at the helm, outside agencies are forcing them to look elsewhere. Injuries to key players and the loss of form of others suggests that the new broom that was being readied for next year, might have to sweep clean in the next fortnight. Lambie, Hougaard and Du Plessis are the future and their time is now.

Big fish rendered toothless in opening games
If there has been a trend in the first week of Rugby World Cup 2011, it is that of major powers failing to get into their stride.

Australia needed an hour to find their game against Italy, Argentina blew a golden opportunity to beat England and South Africa played five minutes of sublime rugby and then chose to rest on their laurels for the remaining 75. But most of all, New Zealand managed to look fretful in scoring six tries against Tonga in the opening game of the competition.

Some of this can be put down to nerves. In an evening that crystallised for the players the weight of public expectation, Auckland came to a standstill for the opening ceremony on Friday. The fact that much of the standstill was due to unprecedented demand for public transport should bring a smile to South African lips after the successful hosting of last year’s Fifa World Cup. It seems that the City of Sails underestimated the effect of 200000 people descending on Auckland Harbour at the same time.

The All Blacks have never had a problem facing Tonga before, and the scoreline suggests that was the case again, but the reaction of players and management after the match told a different story. Several changes have been made ahead of this week’s game against Japan and the sidelining of Dan Carter with a recurrence of an old back injury and Richie McCaw’s calf injury will send shudders through the nation.

Not that New Zealand should have a problem in seeing off Japan, of course.

It is 16 years since the two nations met in a World Cup and no one who was there will forget the proceedings in Bloemfontein in 1995. The final score of 145-17 was at the time the most one-sided international in the history of the game.

Looking back at a game of 23 tries (among the carnage Japan scored two of their own) raises the question: how did they have time to score so many points? One of the reasons is well established: the All Blacks do not know how to ease back. They like to kick an opponent when he is down. Another reason is that this was the Kiwi second team: only five of the starting 15 began the final against South Africa, so there were a lot of players out there with points to prove.

Be sure that televisions around New Zealand will be showing footage of that June day wall to wall this week in an effort to erase the memories of a misfiring opening against Tonga.

Management, by contrast, may choose to draw a discreet veil over a performance certain to instil an inferiority complex in the current set of players.