Don’t touch me on my handbag 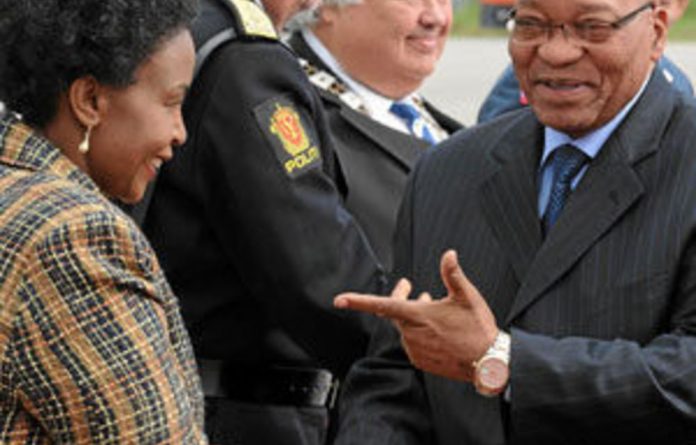 International Relations and Co-operation Minister Maite Nkoana-Mashabane was involved in an embarrassing and expensive spat with airport security in Oslo at the end of a state visit to Norway this month when she refused to pass her handbag through an x-ray scanner.

As a result she missed her scheduled commercial flight from Gardermoen International Airport to her next diplomatic engagement, in Bulgaria. A private-charter executive jet that was then hired to transport her cost the South African taxpayer R235 343, according to a figure released by the department of international relations and co-operation.

An Oslo-based travel agent, Airbroker, confirmed that a one-way charter flight to Sofia could cost as much as R260 000 for an executive jet, depending on its size and the number of passengers on board.

An anonymous department official said the “unnecessary and wasteful expenditure” on a private jet excluded the cost of the first-class commercial tickets for Nkoana-Mashabane and members of her entourage that had been forfeited.

It is unclear what the minister was carrying in her handbag and why she was keen to avoid security screening.

In its response, the department insisted that the Vienna Convention exempted diplomats from luggage searches at airports and that the minister “as the country’s top diplomat” was right to stand her ground.

“[There was nothing in her handbag] which could not be disclosed. This matter was not about the contents of the luggage. It’s a matter of principle in line with the Vienna Convention,” said spokesperson Clayson Monyela.

“The minister’s behaviour was not embarrassing — it ensured that South Africa is treated with the necessary dignity that is accorded to any minister of international relations in terms of customary international law.”

A spokesperson for Gardermoen, Jo Kobro, confirmed that there had been an incident.

Referring only to “a member of the South African delegation” whom the Mail & Guardian has independently established was Nkoana-Mashabane — Kobro said airport security staff had not been able to perform “a total security check on her” and that a “very audible discussion” had ensued.

The department official described the discussion in less diplomatic terms: “Emotional shouting and arguments ensued with the security personnel as to their audacity for requesting that South Africa’s minister of international relations have her bag x-rayed.

The minister was in such a rage that she refused to board the plane that was booked for the delegation,” said the official.

Marit Kvarum of Norway’s Civil Aviation Authority said the country had adopted European Union provisions under which only royalty and heads of state were exempt from airport luggage checks, provided certain conditions were met.

Kobro said: “Here at Oslo airport we cannot deal with government officials from other countries differently from how we treat our own. The prime minister, Jens Stoltenberg, also has to go through security checks and we have never experienced any problems with him or other Norwegian ministers.

“Incidents like this almost never happen at the airport. I remember one single incident with an ambassador who also did not want to be checked. He was also denied access to the terminal.”

Kobro added that the airport security staff had “acted correctly and decisively in this situation”.

A well-placed Norwegian official said the South Africans were “furious” about the way Nkoana-Mashabane had been treated.

It is unclear what happened next.

Several members of the South African entourage may have boarded the earlier commercial flight that was scheduled to land, with one stopover, in Sofia at 4pm on September 2.

Kobro said Nkoana-Mashabane and the inner circle of her entourage all left the terminal building.

According to Hilde Steinfeld, spokesperson for the Norwegian ministry of foreign affairs, a ministry representative who had escorted Nkoana-Mashabane to the airport then accompanied her back to the Hotel Grand in Oslo.

“The ministry was not asked to assist in the further travel arrangements of Ms Nkoana-Mashabane’s delegation,” said Steinfeld, adding that the South African high commission in Oslo took over the arrangements.

The high commission referred all questions to the department.

Several sources have verified that the minister’s group later boarded the private-charter jet from a VIP terminal separate from the main Gardermoen terminal building.

Norwegian aviation authorities confirmed that a single private aircraft, bound for Sofia, took off from Gardermoen on September 2.

The flight was chartered by Sundt Air and took off at 1.19pm.

Kobro could not elaborate on why airport security allowed the minister to board the private jet, which landed in Sofia at 7pm.

The M&G understands that the minister may have left the offending handbag behind, agreed to have it x-rayed on the second attempt, or invoked a diplomatic loophole to bypass the scanner by sealing it in a diplomatic bag.

Monyela said: “The minister’s luggage was not searched and she was accorded her diplomatic privileges.”

Nkoana-Mashabane’s late arrival in Sofia meant she could not address the Atlantic Club of Bulgaria at the Sheraton Hotel, which she had been scheduled to do at 5.30pm.

The club brings together the cream of Bulgaria’s political and business world to raise awareness about international affairs.

Atlantic Club spokesperson Elena Nikolova confirmed that Nkoana-Mashabane’s plane had been delayed and that her personal adviser, Eddy Maloka, delivered a speech on her behalf.

The department published the speech on its website a day later, claiming that it was “by [the] minister” and making no reference to Maloka’s role.

“This was the minister’s speech delivered on her behalf by Dr Maloka hence it was published as such,” Monyela said.

Nkoana-Mashabane’s undignified exit from Norway was not the only incident during a troubled state visit.

According to Norwegian and South African sources, the minister flew to Oslo on a different plane from that used by the main South African delegation.

Once in Norway, she opted to head for her hotel, dropping a scheduled meeting with Norwegian Foreign Minister Jonas Gahr Støre.

The meeting had to be rescheduled.

Monyela said the initial meeting could not take place due to “scheduling challenges on both sides”.

“Støre had a book launch and Nkoana-Mashabane had to receive President Jacob Zuma,” he said.

Zuma also took the opportunity during the state visit to criticise Norway for its participation in the bombing of Libya.