Known only by his absence 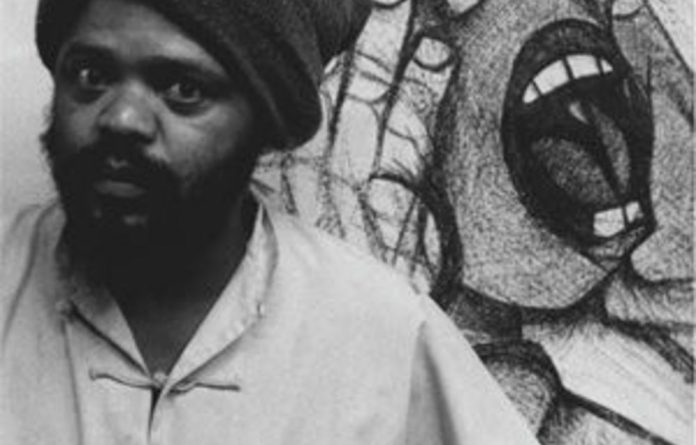 When artist Dumile Feni left South Africa in 1968 his wife was seven months’ pregnant; when he died in 1991 his daughter, Marriam Diale, was in her early 20s. The intervening exile years — at once rough and fretful, productive and rewarding — were spent in London and New York.

In Zwelidumile, Ramadan Suleman’s new film, the director traverses three continents, eyes staring fixedly at the cities’ asphalt roads, searching for the imprint of one of South Africa’s most important artists. Through the life and eyes of Feni’s child, Suleman (Zulu Love Letter, Fools, Behind the Badge) gets to New York’s subways, visits tenement buildings and talks to Feni’s greying friends, fellow artists and admirers.

The result is an epic story that is revelatory and funny, thoughtful and tragic. Feni survived the injustices of apartheid; he stolidly bore the searing effects of exile. Yet his heart, on the eve of democracy, gave up.

It is fitting that the artist died in a New York record shop in the company of one of his closest friends, Nina Bergman. That he met his end in such a shop is not without its irony — it was musicians to whom Feni was always drawn, it was their company he sought.

Connected by blood
Using the eyes of Diale — now the custodian of her late father’s estate — to point out the absent-present father has its merits and problems. One advantage is that she brings a familial and visceral texture to the film. She is, to corrupt a phrase of reggae musician Keith Hudson, blood of Feni’s blood and flesh of Feni’s flesh. The result is that we don’t only have talking heads and ­”strangers” vicariously reliving their exile years using Feni.

The obvious problem is that she did not know her father, in fact, never saw him once until that day when Feni was dressed up for the eternal abyss. So what could she possibly say that is useful? But her ignorance mirrors that of millions of South Africans who were cut off from the “troublemakers”, those who fled into exile.

The list of exiled artists includes people such as photographer Ernest Cole who, like Feni, died soon after Nelson Mandela’s release in 1990; fine artists Louis Maqubela (featured in the documentary) and Gerard Sekoto; writer Peter Abrahams, who never returned to South Africa after living for decades in Jamaica; and the Drum writers Lewis Nkosi, Arthur Maimane and Bloke Modisane.

In a question-and-answer session with the director after the screening of the movie, the topic about exiles came up and someone in the audience mentioned the uneasy, at times fractious, relationship of those who stayed and those who left. This, of course, mirrors Feni’s relationship with his daughter.

The politically astute would even cast the battles of Polokwane that toppled former president Thabo Mbeki as the fight between the “inziles” and the exiles.

The pain of forgetting
Suleman spoke about the angst of the exiled and “what it meant to be an immigrant in Europe”. Even though they tried to live normally and do normal things like marrying, bearing children and generally trying to settle, they never really belonged. Suleman, who was exiled in France, said the immigrants tried to live with the “pain of forgetting one’s family”; when they came back, they tried to establish relationships again with the family they had left behind and from whom they had become estranged.

Tri Continental festival director Rehad Desai helpfully piped up: “You are always an outsider.”
Suleman said the original idea had been to make a movie about Sekoto, whom the director knew personally and who lived in Paris for decades.

This “didn’t work out”. When in 2005 the Johannesburg Art Gallery hosted a retrospective exhibition of Feni’s works, Suleman decided to explore the artist’s life. He wanted the documentary “to tell the exile story”.

The beautiful film, two and half years in the making, is meant to examine “what it meant to be an exile” and is intended as a “memory document” about the departed artist. As a result, it is at once moving and thoughtful.

What nebulous factors decide the price of an artist’s work?

Gallery Momo: No titles enable your own take