Secret’s in the source 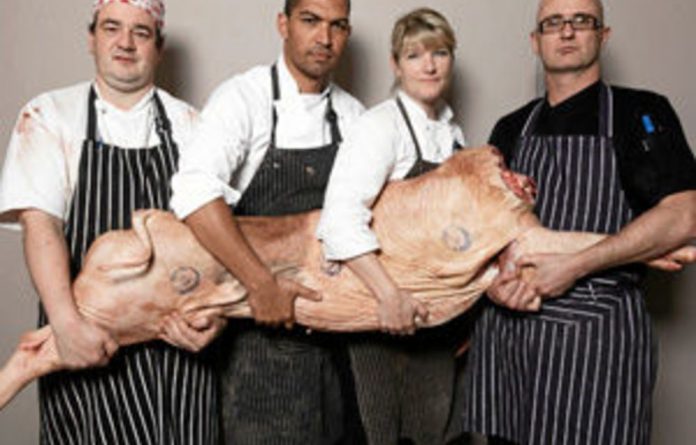 When Lisa tells Homer Simpson that pork, bacon and ham come from the same animal, he responds sarcastically: “Right Lisa. Some wonderful, magical animal.” How correct Homer was, except for the disbelief.

The pig is a wonderful animal and the number of different dishes you can conjure from one is almost magical. I learnt this at a recent “pig-off” sponsored by Men’s Health magazine.

Before we get to the details, let me just say that it’s a transcendental experience, eating a multitude of pig dishes cooked by seven award-winning chefs with a simple brief — respect the animal. The results are enough to strip the fattiest layer of cynicism from even the most hardened of food sceptics. It’s going to require all my self-control not to gush about this, both figuratively and, I’m afraid, literally. In the mouth-watering sense.

Men’s Health magazine recently held its Pig Off — an experiment in “top-to-tail” eating, and a chance for food lovers and chefs to focus on the provenance of meat.

Men’s Health editor Jason Brown explains the concept. “We sourced the happiest, healthiest pig from a farmer who’s passionate about producing quality meat. Then we invited seven of the best chefs we know to celebrate it by giving them individual cuts. To keep it fair, we used a lottery system and gave them freedom to interpret the dishes as they pleased.”

So far, it sounds like your standard pretentious food nerd evening, a case of “a minute on the lips, a lifetime on the hipster”. And it is true that food and society are inextricably linked. You are what you eat, or at least what you profess to eat.

Reuben Riffel, from Reuben’s in Franschhoek, highlighted this fundamental connection, fraught with issues of class and ownership of production, when he spoke about the dishes he’d cooked.
He had been allocated what most would consider the prime cut, the leg, as well as the tail.

But, according to Reuben, growing up when his neighbourhood all chipped in to be able to buy a monthly pig, his family had always been too poor to afford the prime cuts. So he had no experience of cooking leg as part of his history. His fried pig tail was an interesting eat, although possibly not crisp enough for peasant tastes. And it’s quite a challenge dealing with the little bits of cartilage, although a worthwhile one.

Pigging out with a purpose
The aim of this evening, for those of you wondering what gorging yourself to a standstill has to do with Men’s Health magazine, was not just sybaritic. The exercise provided a hook for educating people about the provenance of meat.

This particular pig’s provenance was a farmer called Charlie Crowther, from Glenoaks in the Hemel-en-Aarde Valley outside Hermanus. Crowther gave a long, emotional speech about his pigs’ lives and deaths. He extolled their daily existence of romping through muddy fields of scrumptious acorns — and if you hadn’t tasted the enormous difference between his pig and the usual variety, you might have sneered just a little.

But the proof is in the crackling, so to speak. Crowther’s pigs are, of course, way more expensive than your more proletarian porker, and he slaughters at 80kg instead of the more usual 50kg.

The array of food was bewildering. A favourite was the pig’s kidney bitterballen from Le Quartier Francaise’s Margot Janse. Each chef described their cooking experience, and Janse raised a laugh when she described how much she disliked cooking with kidneys, as they always smelled like pee to her. This pig’s kidneys were different, she said — they smelt like expensive pee. This might have been true originally but when served up they tasted like ambrosia with a crunch. Janse also got the belly as an allotted cut and, in the spirit of the brief, treated it simply using the sous-vide method.

Putting a neck out
Bizerca’s chef, Laurent Deslandes, had the loin, hock and head to play with. He created a delicious curried head with a guava chutney, which was both appealing and intriguing. Bertus Basson, from Overture in Stellenbosch, served apple, chestnut and sage sausages made out of the neck meat and a marvellously balanced terrine made from the head, cheeks and brain.

With such excessive piggy hedonism, you start to lose focus, and contributions from Chris Erasmus of Pierneef at La Motte and Pete Goffe Wood from Kitchen Cowboys have become subsumed in the general blur of orgiastic delight.

Neil Jewell of Bread & Wine organised the pig and has apparently cornered the supply of these animals, much to the good-natured chagrin of the other chefs. So your chances of replicating this holy communion with a pig that didn’t die in vain are going to be dependent on your access to other suppliers.

Even excluding the layer of expertise provided by the inspired chefs, you’ll notice the difference if you make an effort to source good ingredients for any meal you create. With meat, it’s even more important that you know where your food comes from. It might be magic for Homer but it’s worth making real.

Cutting out meat and dairy and slashes your carbon footprint