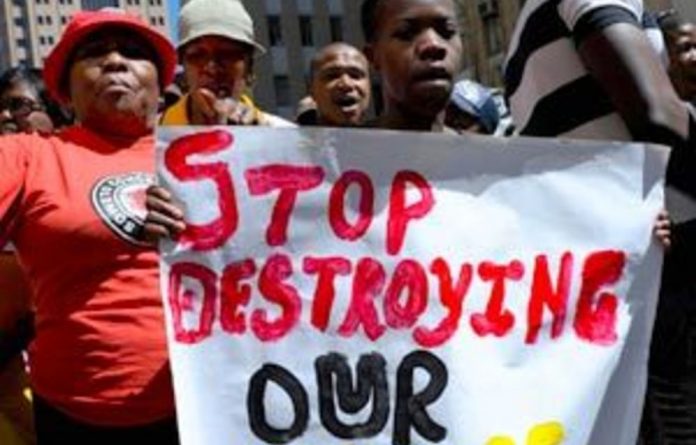 About 1 500 people marched to the Eskom and BHP Billiton offices in Johannesburg on Friday morning to protest against the way in which the companies affected the environment.

The march was organised by Earthlife Africa Johannesburg ahead of the United Nations Framework Convention on Climate Change (Cop17) conference, which takes place in Durban in November.

Eskom is a member of South Africa’s official negotiating team on climate change.

“It doesn’t make sense to have the main polluters sitting on that panel and saying they will solve those problems.”

He said Earthlife Africa wanted BHP Billiton to reveal how much it paid for electricity bought from Eskom.

“We need Nersa [the National Energy Regulator of South Africa] to release that information to us.”

The protesters first went to the offices of BHP Billiton, where they were addressed by Reverend Gift Moerane of the South African Council of Churches.

“We have failed the people of the world by not reminding them that God said the world and all resources in it belong to Him.”

He said the Earth’s resources were meant to sustain life and not to kill it.

The protesters did not hand over memorandums of grievances to the companies, but shouted their demands over loud-hailers.

They accused Eskom of being greedy, and accused it of being responsible for the birth of deformed babies.

Earthlife Africa said it would protest at the Cop17 conference in November if Eskom was still part of the negotiating panel.

“We do not want Eskom negotiating or speaking on our behalf at Cop17,” said Taylor.

“All of these individuals represent the South African government, not their respective organisations,” he said. — Sapa

State capture commission former secretary says allegations against him are...

In its court document, the SIU sets out its case against the alleged fraudulent and corrupt relationship between Digital Vibes, Mkhize and the health department — and asks for a tender worth R150-million to be set aside and money paid back
Advertising