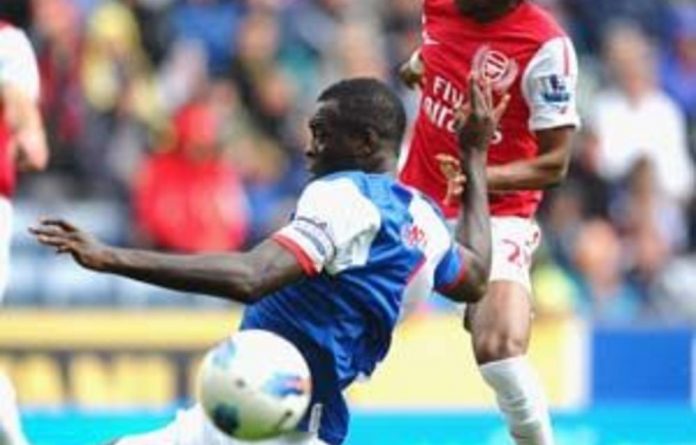 Blackburn Rovers heaped more misery on Arsenal when they came from behind to beat Arsene Wenger’s side 4-3 in the Premier League on Saturday with the Gunners conceding two second half own goals at Ewood Park.

Rovers climbed off the bottom of the table and up to 11th place after Aiyegbeni Yakubu scored two goals on his debut and Alex Song and Laurent Koscielny put through their own goal to give Rovers their first league win of the season.

Arsenal, returning to the north west for the first time since being beaten 8-2 by Manchester United three weeks ago, took the lead when Gervinho scored his first goal for the club after 10 minutes.

Yakubu equalised 15 minutes later with his first goal for Blackburn before his former Everton team mate Mikel Arteta, who scored for Everton at Ewood Park three weeks ago, put Arsenal back in front after 34 minutes with a rising shot from the edge of the box.

Blackburn were level again after 50 minutes when Arsenal failed to clear a free-kick and the ball bounced off Song’s thigh and past goalkeeper Wojciech Szczesny for the equaliser.

Nine minutes later Yakubu beat the offside trap to score from point-blank range to make it 3-2 and 10 minutes after that a stunning break from Blackburn which involved Junior Hoilett and substitute Martin Olsson ended with Olsson’s cutback being turned into his own goal by Koscielny to make it 4-2.

Substitute Marouane Chamakh scored with a superb header to give Arsenal hope with five minutes remaining but Rovers survived a late onslaught to ease the pressure on manager Steve Kean after 250 fans staged a protest march calling for his sacking before the game.

Five games were being played later on Saturday including the match at Molineux between Wolverhampton Wanderers and Queens Park Rangers which was in doubt earlier after a power cut hit the city centre. — Reuters