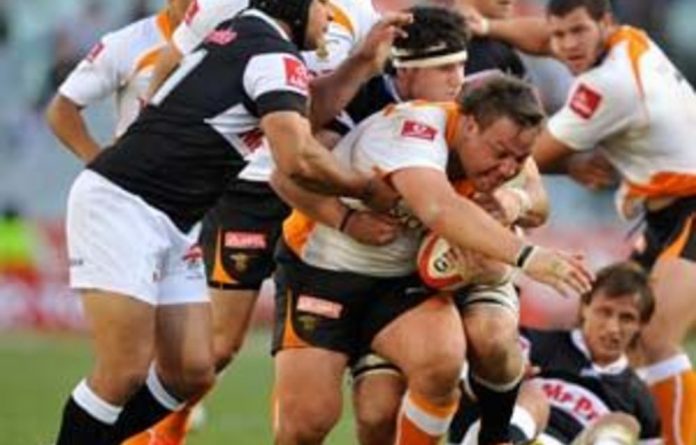 Rookie flyhalf Johan Goosen kicked 29 points to help the Free State Cheetahs get their Currie Cup campaign back on track with an emphatic 53-32 victory over the Sharks at the Free State Stadium on Saturday.

The 19-year-old, making just his third start in the competition, was influential throughout with his kicking game and ability to break the line a constant worry for the visitors.

He landed all but one of his kicks at goal, including a spectacular 50m plus drop goal, adding to a brace of tries by Pieter Labuschagne and one each for Ashley Johnson and Tewis de Bruyn as Naka Drotske’s men extended their grip on fourth place on the log.

Goosen, who kicked 14 from 14 prior to Saturday’s match, missed an early penalty, although the chance was from well inside his own half.

The teenager made amends moments later when he sent over a kick from much closer in on the left after Dale Chadwick was penalised for going in illegally at the scrum.

Frederic Michalak hit straight back for the Sharks after Cameron Jacobs’ side entry at a ruck, before two further Goosen penalties put the hosts back in front.

Great speed
Despite being outrun for the opening quarter, the men from Durban were the first to open the try account when Michalak, Marius Joubert and Sibusiso Sithole combined to send Stefan Terblanche over on the right.

Frenchman Michalak missed the conversion but moments later put his side in front for the first time via a penalty which came after another side entry at the ruck.

Goosen had other ideas and showed great speed with a burst through the middle from his own half before exchanging passes with Robert Ebersohn on his way to his first Currie Cup try.

After the extras were added, the game again swung to the other end when Springbok winger Mvovo sped away from two men to score on the left.

Michalak converted to give the Sharks a two point lead but that quickly turned into a five point deficit when Goosen’s excellent offload to Hennie Daniller enabled Labuschagne to cross for another converted try.

It was 23-18 at the break and moments after the restart, Goosen extended the lead with an outrageous drop goal from close to the halfway line on the extreme right side of the field.

He then extended the advantage to 11 with a penalty from straight in front before a shocking pass from Johnson denied them a third try.

That proved a costly error as Mvovo’s explosive run through the middle took him over for a second score of the afternoon and anther converted one after Michalak sent over the extras.

Costly mistake
Jacques Botes was the next player to err in a crucial area after his mistake on the halfway line gave Goosen another three points, before Johnson ran in under post for another converted try after good work from the forwards.

During the build-up to the try, Jandre Marais high tackled Riaan Smit and earned himself a yellow card in the process with the Sharks 14 behind and just under a quarter of the game to play.

That proved decisive with Labuschagne subsequently crossing for his second and Tewis de Bruyn also bundling his way over — both scores converted by replacement flyhalf Sias Ebersohn.

With time running out Botes crossed for a converted consolation try that at least earned John Plumtree’s men a bonus point but they remain third on the log. — Sapa