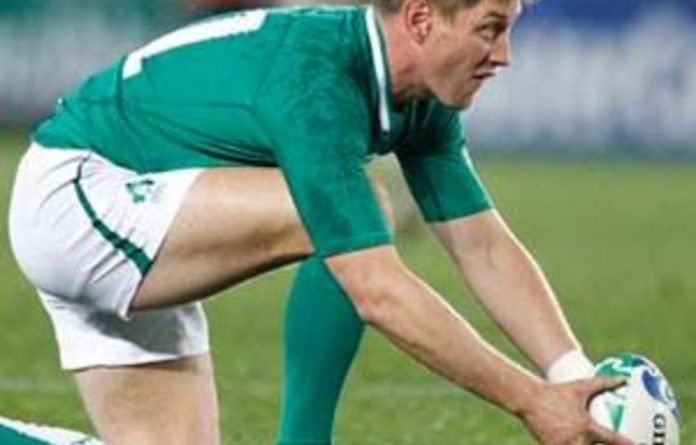 Ireland produced the first major upset of the World Cup with a 15-6 victory in a heavyweight thriller of a match played in a febrile atmosphere at Eden Park on Saturday.

Coming into the match on the back of four warm-up defeats and a shaky opening victory against the US, the Irish tackled and harried and hustled their way to a first victory over Australia in five attempts at World Cups.

Two penalties and a drop goal from Jonathan Sexton and another two penalties from Ronan O’Gara won the match but it was the sweat of the Irish pack which earned the plaudits that were showered down on the players from the green-clad majority in the 58 000 crowd.

“It was the performance we knew we had in us,” Irish skipper Brian O’Driscoll said in a post-match interview.

“We swear we were in Dublin with that crowd. Absolutely incredible support and it was our job to give them something to shout about and thankfully we did.

“It’s just half the job done. We have two wins and two more to get so, as much as we’ll enjoy this, let’s not lose sight, there are two more games.”

Barring a huge upset in their remaining games, Ireland will now top Pool C and go through to a quarter-final against the second-placed team from Pool D, which is likely to be Wales, Fiji or Samoa.

Australia must now be resigned to finishing second and a likely last eight match-up with defending champions South Africa with, if they get through that, the All Blacks prospectively waiting in the semi-finals.

Not enough momentum
“The Irish did well to spoil our ball, we couldn’t get any momentum and we played some dumb footy,” Wallabies skipper James Horwill said.

“We weren’t good enough. We didn’t given enough clean platform for our backs and they did well to spoil us and they played well and they deserved their win.”

In a tightly-contested and often abrasive first half, Australia looked the brighter in attack with full back Kurtley Beale particularly incisive but the Irish had success in holding up the Irish runners and winning put-ins to the scrum.

Two penalties from James O’Connor and a penalty and drop goal from Jonathan Sexton left the sides deadlocked at 6-6 going into halftime, the same score as Australia had shared with Italy halfway through their opening match.

But while the Wallabies ran in four quick tries after the break on their way to a 32-6 win against the Italians, the Irish proved to be made of sterner stuff.

While their pack started to ratchet up their dominance of the scrum, Sexton added a second penalty to put Ireland 9-6 ahead after 50 minutes and saw another ping off the post two minutes later.

Quade Cooper and Beale kept trying to kickstart their usually potent offence, but the green defence would bend a little before swallowing the Wallabies backs up and winning more scrum put-ins with their swarming aggression at the breakdown.

When Ronan O’Gara, on for centre Gordon D’Arcy, put the Irish a further three points ahead after a fourth penalty was awarded against the Australians for infringements at the set scrum after 61 minutes, things looked bleak for the Wallabies.

A Will Genia charge towards the Irish line was then brought back for crossing before a huge Sexton up-and-under led to another scrum under the Australian posts and another penalty against the Wallabies front row.

As the rain started to fall again, O’Gara slotted the three points to stretch the lead to nine and the crowd settled in for a dramatic last nine minutes.

The Australians camped on the Irish line but neither forward nor back could break through the green wall and Irish winger Tommy Bowe broke the siege with an interception off a Cooper offload.

His charge the length of the pitch was ended short of the line by an O’Connor tackle but Australian hopes of a comeback to match that the 1991 Wallabies famously achieved in Dublin had now all but gone. — Reuters