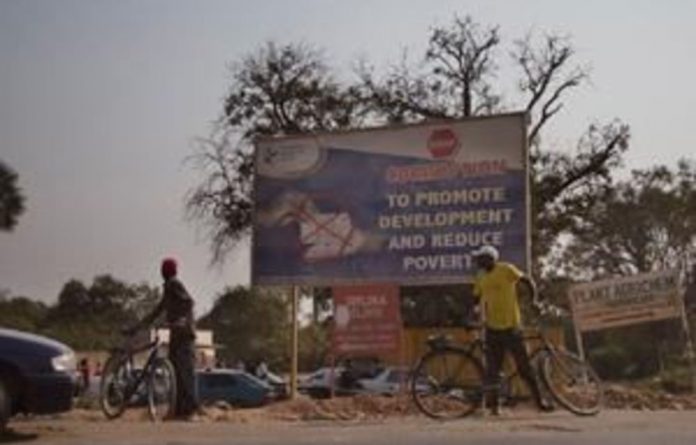 President Rupiah Banda hopes Zambia's mining boom will propel him to re-election on Tuesday over main opposition leader Michael Sata, who made his name slamming the growing Chinese presence in the country.

The election could potentially bring a landmark transfer of power in the poor southern African country, which has been ruled by just two parties since independence from Britain in 1964.

The last race between the two candidates — a special election in 2008 to fill the final three years of late president Levy Mwanawasa's term — was decided by two percentage points.

Sata accused Banda's Movement for Multiparty Democracy (MMD) of rigging the vote, and his supporters rioted for days after.

Observers are predicting another tight race in Tuesday's presidential, parliamentary and local polls, which will decide the country's leadership for the next five years.

"This election really is a watershed election," said veteran political analyst Lee Habasonda, who heads the non-profit Southern African Centre for the Constructive Resolution of Disputes.

"It comes after 20 years of MMD rule. And while the MMD may have advantages of incumbency, I think they've been given a run for their money because of the time they have been in power. It is going to be a very close call," he told Agence France-Presse.

Banda has campaigned on a platform of economic growth and infrastructure development, after presiding over an economy that expanded 7.6% last year and 6.4% the year before, according to the IMF — one of the fastest rates in Africa.

The growth spurt has been driven by rising international copper prices and a rush of Chinese investment in Zambia's copper sector, the largest in Africa and one of the top 10 in the world.

Banda and the MMD claim credit for the boom and the public-works construction spree it has helped fund.

"From the MMD you get more growth, more investment and more jobs for our youth," he told supporters at his final campaign rally on Saturday.

But Banda has been accused of failing to spread the wealth, with 64% of the country's 12.9-million people still living on less than $2 a day.

Under Banda, the country abolished a 25% tax on windfall profits in the mining sector, pleasing investors but sacrificing hundreds of millions of dollars in state revenue.

Corruption complacency
They also say Banda is soft on corruption and has betrayed Mwanawasa's graft-busting legacy.

Banda's government refused to appeal the corruption acquittal of former president Frederick Chiluba, whom investigators accused of embezzling $500 000 during his 1991 to 2002 presidency.

The Banda administration fired Task Force on Corruption boss Max Nkole after he tried to appeal the ruling. Then it disbanded the Task Force.

"When compared to the previous government, President Banda is complacent in as far as the fight against corruption is concerned," Reuben Lifuka, head of the Zambian chapter of watchdog group Transparency International, told AFP.

Sata, who is making his fourth bid for president, has sought to exploit voter fatigue with Banda and the MMD.

"MMD have ruled for 20 years. Their time to go has come," he told supporters at his final rally.

Sata thrives on controversy, and in his 2006 campaign prominently threatened to expel the Chinese investors who have flocked to the country's copper mines.

He has since scaled back some of his rhetoric, and now says he will work with the Chinese if elected.

But critics fear the strong-fisted firebrand, known as "King Cobra", would make an authoritarian president.

Third-party candidate Hakainde Hichilema of the United Party for National Development could play the role of spoiler in the race.

Analysts say he is likely to strip away more of Banda's rural base than Sata's constituency among youths and the urban poor.

About one million of the 5.2-million Zambians on the election roll are first-time voters, a factor also likely to bend in Sata's favour. – AFP