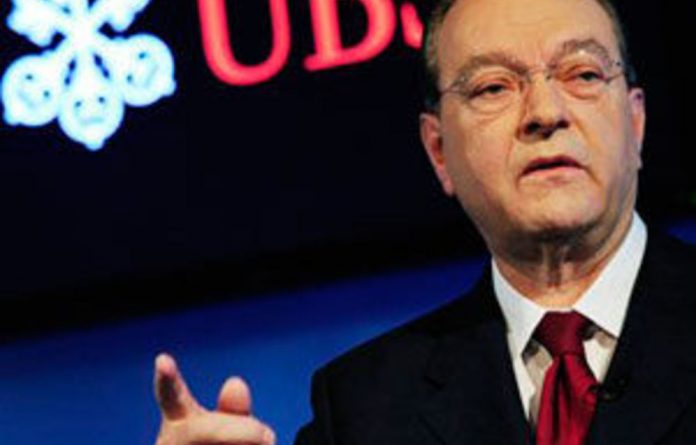 The head of Swiss banking giant UBS said on Sunday that he did not feel guilty about the $2-billion rogue trading that occurred in his bank and that he was not planning to resign over the fraud.

“I am responsible for everything that happens in the bank. But if you ask me if I feel guilty then I would say no,” Oswald Gruebel told Swiss newspaper Sonntag in an interview.

When someone is driven by criminal intent “you can’t do anything,” said Gruebel.

The chief executive also shrugged off Socialist calls for his resignation as “all political”.

“I am not thinking about resigning,” he added, pointing out that this would be a question for the management board.

Gruebel, a German who was previously at the helm of Credit Suisse, took over the reins of UBS at the height of the financial crisis when the bank was struggling to recover after losing billions of francs and turning to state aid.

He helped to steer the ailing lender from record losses back to profit in 2010.

‘Time to say goodbye’
Pressure has been mounting on Gruebel since the unauthorised trades were uncovered on Thursday.

The bank’s honorary chairperson Nikolaus Senn told Swiss German television late on Friday that he doubted that Gruebel could stay after the debacle.

Senn said that adequate checks were not implemented and criticised Gruebel for his over-reliance on the controls system to uncover problems.

“I don’t know how many times Oswald Gruebel flew to London in order to understand from the managers on site what was going on,” Senn said.

Another Swiss newspaper NZZ am Sonntag quoted an unnamed member of the management board as saying that Gruebel still enjoys the support of major shareholders such as Singapore’s sovereign wealth fund GIC.

Massive losses
Politicians called for an end to the investment banking business which was also at the root of UBS’ colossal losses in the United States sub prime crisis.

“We must seriously look at whether one should ban investment banking in commercial banks,” the far-right politician told newspaper SonntagsZeitung.

The bank announced the massive loss through unauthorised trading just hours after the trader was arrested at UBS’s London offices on Thursday.

Britain’s Sunday Times newspaper cited UBS insiders saying that Adoboli had been working on unauthorised deals worth $10-billion before his losses were detected by the bank.

UBS had wound down the portfolio by midday on Friday, said the newspaper, but the scale of the bets is likely to raise questions about the bank’s internal controls.

NZZ am Sonntag quoted unnamed sources saying that the losses would be “slightly higher” than the $2-billion estimate issued on Thursday.

UBS is expected to give further details on the case later Sunday, added local media.

The bank said the true magnitude of the risk exposure on these positions was hidden through “fictitious” positions allegedly executed by the trader.

The bank reiterated that no client positions had been affected by the unauthorised trades carried out over the last three months.

It has also unwound the action and brought the situation under control.

“We have now covered the risk resulting from the unauthorised trading and the equities business is again operating normally within its previously defined risk limits,” it said.

The bank also revealed that Adoboli had revealed the rogue trades on September 14 after inquiries from the bank’s control functions.

An internal probe has been launched on the case and on the bank’s control environment, added UBS. — AFP