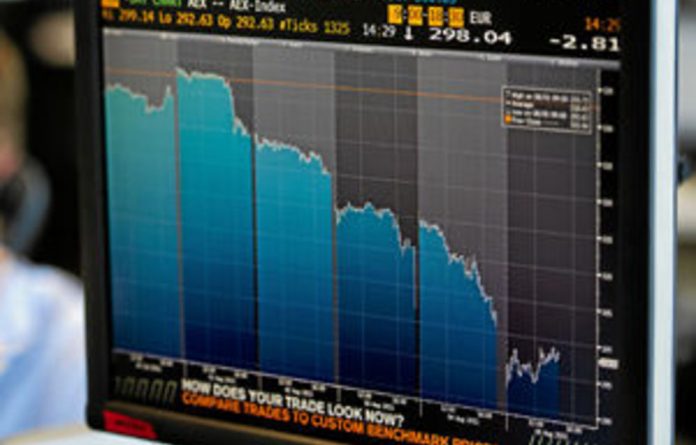 Frederic Oudea, the exasperated chief executive of Société Générale, stood in front of investors in New York on Tuesday this week for some “straight talk” to counter continued anxiety in the markets about the health of the French banking system.

In rapid-fire delivery the Frenchman acknowledged the rumours that have swirled around SocGen over the past month — as the deepening eurozone crisis has highlighted the exposure of all French banks to the problem countries — and set out to dispel the idea that France’s second-biggest bank could be crippled if the crisis worsens.

Oudea stressed that SocGen’s exposure to Greek debt was €1.7-billion, down from €2.6-billion at the end of last year, plus €3.3-billion of other lending through its Greek bank, Geniki — barely 1% of the balance sheet. The day after announcing plans to raise €4-billion by selling off assets, he stressed that the exposure was “manageable”.

French bank stocks plunged by up to 12% in early trading before racing higher after the country’s biggest bank, BNP Paribas, denied it was facing funding difficulties for US dollars. Even so there are calls for France to step in and bail out its banks.

Sir Howard Davies, former chairman of the British Financial Services Authority and now a professor at the Sciences Po university in Paris, told the BBC: “There is no alternative now in France for the government to put in fresh capital. Within the next two or three days the French government will have to recapitalise their banks.”

Amid rumours that China may invest in Italy to help prop up what is regarded as the last country that can fall before the eurozone breaks up, Louise Cooper, of BGC Partners, said: “How many more days can we see such steep share price falls without some kind of government intervention? It appears the Chinese government may be buying stakes in Italian companies, but will the French state start buying shares in their banks?”

Christine Lagarde, the new Inter­national Monetary Fund head and former French finance minister, has also suggested banks in Europe should raise capital. Despite share price rises in SocGen, BNP and Crédit Agricole, the atmosphere remains tense. In the Wall Street Journal Nicolas Lecaussin, of France’s Institute for Economic and Fiscal Research, wrote this week that a BNP executive had told him the bank could no longer borrow in dollars. The response was emphatic and immediate: “BNP Paribas categorically denies the statements.”

Regulator’s data
Data from regulators in Basle show that French banks have more exposure to Greek creditors — $56.7-billion — than other European banks. And analysts at Barclays Capital, after a comparison with eight non-French banks, concluded: “French banks in absolute terms have some of the biggest amounts of short-term debt outstanding — their wholesale funding mix is more skewed to the short term.” But the banks were not on a “dimensionally different scale” from their rivals.

Sentiment has been affected by the way the French institutions raise the funds to operate their businesses and by the possible downgrade by Moody’s ratings agency, which fuelled Monday’s 10% decline in the sector.

Moody’s downgraded SocGen and Crédit Agricole on Wednesday, and BNP remains under review. Comparisons are being drawn with conditions in 2008 after Wall Street’s Lehman Brothers collapsed. But analysts at Nomura believe the comparison is overdone as banks have pre-empted their liquidity needs, built up dollar deposits and can turn to the European Central Bank in a way they could not during the credit crunch.

French bank bosses will be hoping the rally can be sustained and, even if the Élysée does have to step in, the banks will be in familiar territory, as many were state controlled until the mid-1980s. —