Boks get back to the business of winning 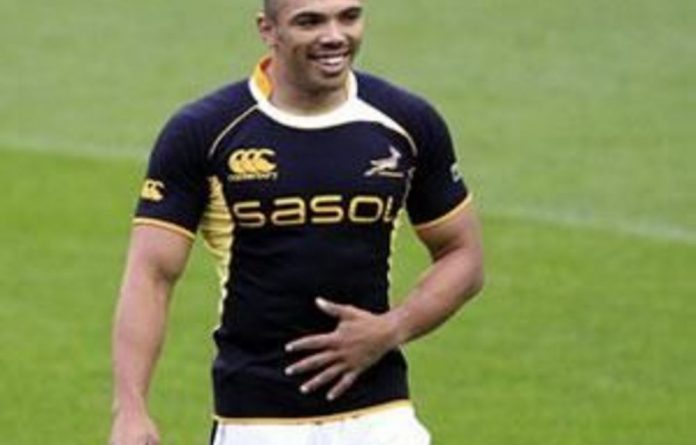 South Africa feel they have what it takes to successfully defend their World Cup title defence with minnows Namibia their next tournament indicator at North Harbour on Thursday.

It’s been an underwhelming year so far for John Smit’s Springboks — losing half of their six internationals leading into the World Cup and a distant third in this season’s Tri-Nations behind the Wallabies and All Blacks.

But there were signs in last Saturday’s 49-3 dispatching of Fiji that it was the Boks of old as they build towards a likely quarterfinal showdown with the Wallabies.

“We were feeling the heat and put a heck of a lot of preparation into the Fiji game, and to be honest we are all a bit shocked that it went so well,” utility back Francois Steyn said.

“For the whole team it has been an eye-opener to see what we can do. The belief is flooding back.”

South Africa have made five changes and welcome back winger Bryan Habana for their third Pool D game with their African neighbours.

Habana missed the Fiji romp with a knee injury and will have another crack at becoming the all-time Springbok record tryscorer, an achievement he currently shares with with Joost van der Westhuizen on 38 tries.

“Bryan brings a lot of energy to the team, he’s a bundle of energetic spirit that we need there. I’m happy to give him a run again and see that he’s over his injuries,” coach Peter de Villiers said.

Included in the team are wing Gio Aplon, prop CJ van der Linde and hooker Chiliboy Ralepelle, who have not yet featured in the tournament.

Ralepelle was included on the bench in the place of in-form hooker Bismarck du Plessis — a surprising move.

Locks Victor Matfield and Johann Muller, centre Jean de Villiers and flyhalf Butch James were not considered for the match.

The Springboks are expected to pile on the points against the Namibians, hammered 105-13 in their only meeting in Cape Town four years ago.

Skipper Smit, who will again become the most capped Springbok player when he wins his 109th cap, is backing up for his third game at the tournament.

“I think we certainly are making progress. In a World Cup, if you can keep winning and improving there’s enough weeks for you to get into your perfect type of form,” Smit said.

So many changes
Much has been made this week of an impending quarterfinal with the Wallabies after their shock 15-6 loss to Ireland.

“That’s the wonderful thing about a World Cup. There are so many permutations and people trying to guess the routes and pathways,” Smit said.

“I think as a team if you try and think what might come, you often lose sight of where you need to be going in the next couple of minutes.

“Any team that wants to win a World Cup needs to beat whoever’s in front of them in that next weekend.”

“We now know that if we want to have any chance of getting to the top, we’re going to have to beat some of the best teams in the world. It’s going to be the same on the other side of the draw as well.”

The 19th-ranked Namibians, drawn largely from local amateur club rugby, know this will be a monumental challenge to stop the scoreboard from going into meltdown.

“I think it’s going to be tough but, for us, it’s a huge honour and privilege to play against the defending champions,” centre Danie van Wyk said.

Flanker Tinus du Plessis added: “It’s going to be awesome. South Africa are our neighbours, so it’s a bit of a grudge match.” — AFP, Sapa