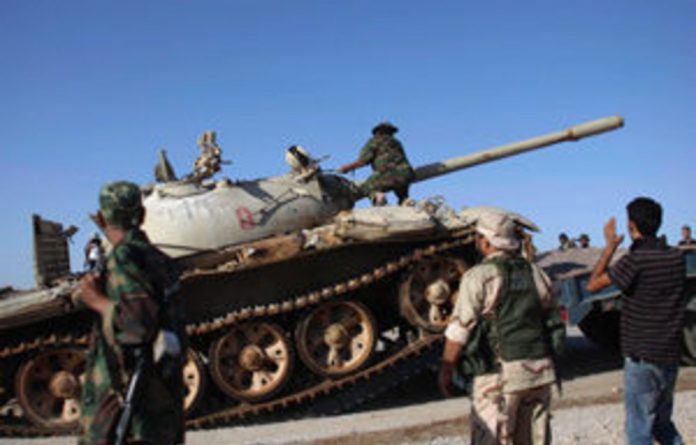 Libya’s interim rulers said they had captured one of Muammar Gaddafi’s last strongholds deep in the Sahara desert, finding a secret stock of chemical weapons, and had largely taken control of another.

Poorly-organised fighters with the National Transitional Council (NTC) were still struggling to make inroads at two other pro-Gaddafi redoubts, and commanders were trying to stop chaotic weapons handling that has already killed several fighters in “friendly fire” incidents.

Reuters saw one fighter blow his own head off and kill a comrade while handling a rocket propelled grenade.

If the NTC is unable to swiftly assert its control over the country and its own forces, it could embarrass Western leaders, especially France’s Nicolas Sarkozy and Britain’s David Cameron, who took a gamble by backing the anti-Gaddafi leadership.

The Nato alliance has extended a six-month bombing campaign for another 90 days to continue air strikes to support the NTC.

The interim government controls the capital and most of the oil exporting country’s territory after its fighters, with support from Nato warplanes, swept Gaddafi from power a month ago. The deposed ruler himself is still at large and could be in one of the outposts being fought over.

The NTC’s military spokesperson said its forces had seized the outpost of Jufra about 700km south-east of Tripoli, and most of Sabha, a larger town further south which is the traditional base of Gaddafi’s tribe.

“The whole of the Jufra area — we have been told it has been liberated,” spokesperson Fathi Bashaagha told reporters in the city of Misrata late on Wednesday. “There was a depot of chemical weapons and now it is under the control of our fighters.”

His comments could not be confirmed independently. Under Gaddafi, Libya was supposed to have destroyed its stockpile of chemical weapons and abandon its nuclear programme in early 2004 as part of a rapprochement with the West. The Organisation for the Prohibition of Chemical Weapons says Libya kept 9.5 tonnes of mustard gas at a secret desert location.

Gaddafi loyalists have been holding out in Jufra and Sabha along with the bigger strongholds of Bani Walid, south-east of Tripoli, and Gaddafi’s hometown of Sirte, since the fall of the capital in August.

“We control most of Sabha apart from the al-Manshiya district. This is still resisting, but it will fall,” said another NTC military spokesperson, Ahmed Bani.

CNN, citing a correspondent in Sabha, reported that NTC fighters had occupied its centre on Wednesday after taking the airport and a fort the day before.

However, chaos prevailed among fighters besieging Gaddafi’s other two remaining major strongholds. Several attempts by NTC fighters to take Bani Walid and Sirte in the past week have ended in disarray and panicked retreat.

Lack of organisation
North of Bani Walid on Thursday morning, NTC military forces were bringing forward tanks and Grad rocket launchers in preparation for a renewed attempt to take the town. It was not clear though when that attack would begin.

The offensive there has been frustrated by stiff resistance from well-drilled loyalist fighters, and also by a lack of organisation among the NTC forces. They operate in disparate units based on their home town, with little overall command.

On Wednesday, one fighter shot his own head off and killed another fighter while handling a rocket-propelled grenade in full view of a Reuters team. In another incident, a fighter wounded himself and another fighter after losing control of his machinegun. The nascent NTC national army tried to bring order.

“We have set up a unified operations room to unite all brigades,” said brigade commander Omar Kabout. “The purpose is to increase coordination and end all this chaos because many rebels have arrived without commanders. We need to put them into brigades and stop all this random shooting.”

But the message was not getting through to all the fighters, many of whom go into battle wearing flip-flop sandals, T-shirts and jeans and have no military training.

“We don’t take orders from the NTC. We listen only to our own commander,” said Ziyad Al Khemri, a fighter from the town of Zawiyah, just west of Tripoli.

Families fleeing Sirte
A Reuters reporter on the western outskirts of Sirte, the other main Gaddafi redoubt on the Mediterranean coast, said hundreds of civilians in pickup trucks and sedans loaded with mattresses, food and water, were pouring out of the city.

At checkpoints, NTC fighters searched their vehicles to make sure they were not loyalist fighters, and then handed out juice, biscuits, water and yoghurt to the fleeing civilians.

Aid groups have expressed concern about deteriorating humanitarian conditions in Sirte, under siege by NTC forces.

“There is no water inside, there is no gas, there is nothing,” said one resident, who declined to give his name, at a checkpoint as he drove his white sedan away from Sirte.

Fighters patrolling the outskirts of the city in pick-up trucks mounted with machine guns and rocket launchers said there had been skirmishes with Gaddafi loyalists. They said they were waiting for civilians to evacuate before launching an assault.

“It’s not a problem with the army. It’s not a military problem,” said Hishem, a fighter whose pick-up was mounted with a 106mm recoilless rifle. “The problem is that there are families still inside. Getting them out is still the most important thing.”

On the eastern side of Sirte, fighters making their way back from the front line said they were meeting fierce resistance at Khamseen, 50km from the city, and that they lacked the firepower to respond.

“I’m 100% sure that there is someone important in Sirte, either Gaddafi himself or one of his sons, because his forces have become suicidal in the Khamseen area,” NTC fighter Hamed al-Hachy told Reuters. – Reuters