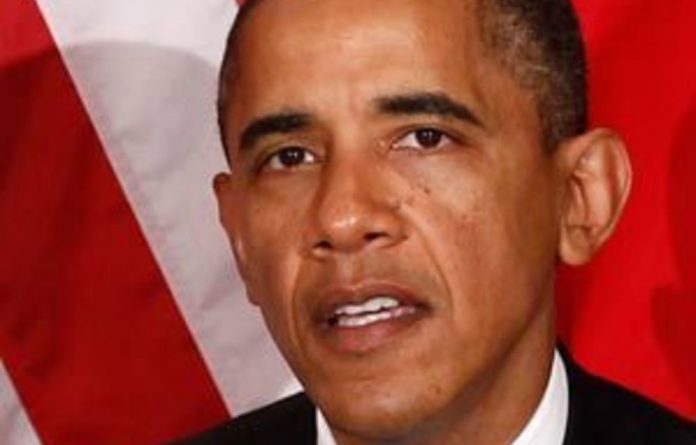 Angry Palestinians on Thursday protested in the streets of Ramallah and Gaza after a speech to the United Nations by US President Barack Obama which was seen as unashamedly pro-Israel.

More than 1 000 Palestinians carrying signs denouncing Obama gathered outside the West Bank headquarters of Palestinian president Mahmud Abbas before marching into the city centre shouting: “It’s shameful for America to support the occupation.”

And in Gaza City, around 300 women held a protest outside the UN headquarters, shouting anti-Obama slogans as Hamas security forces watched them without intervening.

In Nablus, around 200 teachers protested in the city centre, holding banners reading: “America is a partner of the Israeli occupation and terrorism” and “Obama wants to buy votes with Palestinian blood.”

Essam Dababseh spokesperson of the teachers said: “We are protesting against Obama’s speech, which was biased towards Israel.”

“We want to support the Palestinian leadership in the face of American pressure.”

Opposition to bid for UN membership
Obama’s address to the UN General Assembly, in which he reiterated his opposition to the Palestinian bid for UN membership, and empathised with Israel’s struggle in a hostile region without mentioning the occupation or Jewish settlements, has sparked almost unanimous condemnation across the Palestinian territories.

“America is the head of the snake,” bellowed demonstrators in Ramallah as they held up signs deriding Obama for his address, in which he warned the Palestinians there would be “no shortcuts” to peace.

“Shame on those who pretend to be democratic,” read one placard as the throng marched to the city centre, where on Wednesday more than 15,000 people had gathered for a festival of support for the UN membership campaign.

The Palestinian workers union said it would call for rallies outside US embassies across the Arab world on Friday.

“Obama’s speech reflects the American bias towards the Israeli occupation and it proves that the continuing Arab and Palestinian bet on the Americans is wrong,” said Sami Abu Zuhri, a spokesperson for Gaza’s Hamas rulers.

“We call for the adoption of a national Palestinian strategy based on self reliance and the Arab and Muslim world in light of this American and Israeli arrogance.”

Commentators in the three main Palestinian newspapers all took the same angry and disappointed tone over the US president’s remarks.

“Obama’s speech … was a disappointment to those who had been waiting for something new from him, provoking extreme outrage and anger,” wrote Talal Okal in the Al-Ayyam daily.

He accused Obama of “deepening the bias towards Israel’s narrative, positions and policies.”

Israelis ‘portrayed as victims’
“He put the Jews and Israelis in the position of victims who are surrounded by hatred and wars against them by Arab countries, but this speech of his contained nothing of the suffering of the Palestinians.”

Writing in Al-Quds, the biggest-selling Palestinian newspaper, Arab Israeli MP Ahmed Tibi said Obama’s speech had tried to cosy up to the wave of uprisings sweeping the region, while completely ignoring the plight of the Palestinians.

“In the same speech in which Obama praised the uprisings and revolutions by the Arab people against tyranny and oppression, he declined to even mention Israel’s occupation of Palestinian land,” he wrote.

Similar complaints could be heard on the Palestinian street.

“When Obama came into the White House as president, his positions and aspirations gave us hope,” said Mohammed Zeidan, a school director in Ramallah, accusing the US president of being “fair to every Arab country except the Palestinian people”.

Later on Wednesday, Obama told Palestinian President Mahmoud Abbas that the US would veto any Security Council move to recognise Palestinian statehood.

“We would have to oppose any action at the UN Security Council including, if necessary, vetoing,” Ben Rhodes, the White House national security council spokesman, told reporters after Obama met Abbas in New York on Wednesday.