Finding the right mix of youth and experience 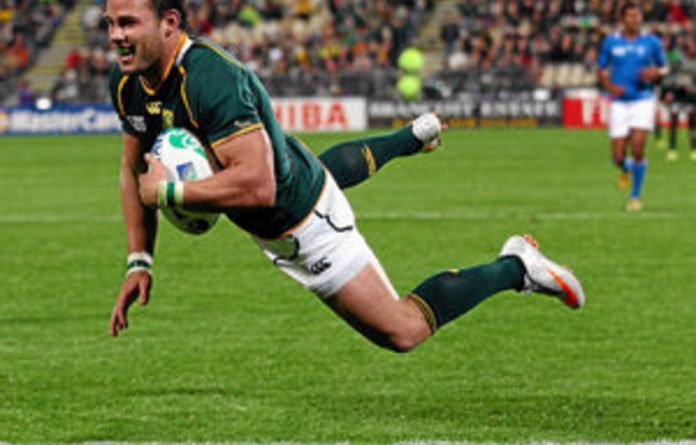 A match of 12 tries that only really came to life in the final quarter will be remembered principally for Bryan Habana’s record-breaking five pointer in the 21st minute. A long, flat pass from Danie Rossouw released the flyer for his 39th test try, breaking the record set by Joost van der Westhuizen.

A frustrating 11 games and 15 months had passed without Habana getting his name on the score sheet.

Last week’s clinical dismantling of Fiji happened in Habana’s absence and despite the lopsided score line at the North Harbour Stadium, this match was nowhere near that performance by the defending world champions.

The bonus point arrived three minutes before half time, with Jacque Fourie the beneficiary of a good piece of line straightening by Frans Steyn, but there was much to discuss in the Springbok dressing room at the break.

As captain John Smit said after the game, “A few bad habits crept in and we got too loose too early.” The necessary refocus occurred on the 50-minute mark, when the substitute’s bench got busy.

The introduction of Chiliboy Ralepelle saw Smit go to tighthead and he promptly conceded a penalty in the first scrum thereafter but, to be fair to the skipper, he had a tidy game overall.

The stalwarts of 2007 continue to have a mixed tournament, with Bakkies Botha utterly anonymous, but Danie Rossouw again in sublime form.

Hard work
On the available evidence it seems certain that Rossouw and not Botha will partner Victor Matfield in the knockout stages, assuming the vice-captain makes a full recovery from injury.

Elsewhere there is clear evidence of hard work behind the scenes by the fitness trainers in the case of Frans Steyn. Having looked unconvincing at fullback in the opening match against Wales, Steyn has been immense at inside centre following the injury to Jean de Villiers.

He is no longer the bloated 110kg figure who returned from club rugby in France and it will be difficult to find reasons to redeploy him even if De Villiers recovers from his damaged ribs.

The most telling contribution of all, however, came from Francois Hougaard. After an hour at scrumhalf, Hougaard went to wing when Fourie du Preez came off the bench. Hougaard’s mechanics may not be as polished as Du Preez’s, but he makes up for it in sheer verve, the sidestep to score the final try of the match being perhaps the highlight.

The whole squad has had enough game time now for the selectors to identify their strongest 22 ahead of the knockout stages.

With just one pool game left, the Springboks, with their canny mix of youth and experience, are emerging as tournament favourites.