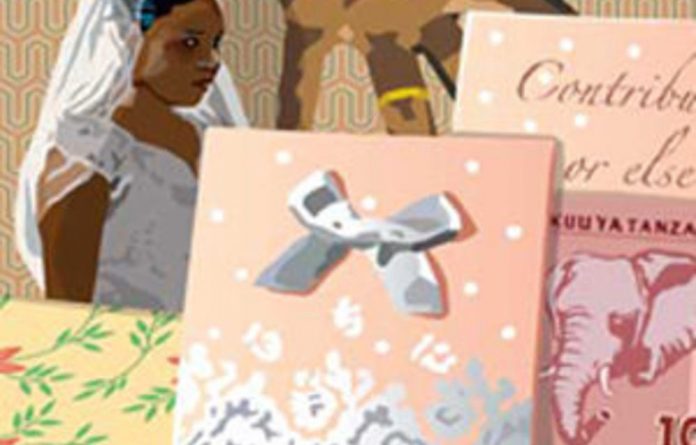 It’s eight in the morning when I enter the office gate just after dropping out of the minibus taxis — famously known as daladala — and my cellphone rings. I take it out of my jeans pocket only to find that it is one of my college mates, an old friend who I have not seen for months.

“Hey Erick, how are you?” he asks by way of greeting. “You are not seen — I just find your name in the papers.” I give him an excuse about a busy life at the newspaper in Dar es Salaam that doesn’t seem to allow me to meet regularly with old friends, but I tell him that I’m doing fine.

After some small talk the real reason for his call comes out. “My friend, I am getting married in the next two months and I really need your support,” he says. I can’t possibly reject his request outright so out comes my standard response: “Hey, congratulations, man, count me in.”

But, really, all I can think of is the small table in my bedroom where, just next to my computer, there are about five cards from close and not-so-close friends with the same request — an appeal for a contribution to a wedding.

The texts in the cards are almost the same. “The family of so-and-so is happy to inform you that their beloved son/daughter is getting married in October. We have a pleasure to ask you for your participation by contributing some money and moral support. Please give the money to the one who gave you this card or contact the phone numbers below.”

This wedding “contribution” has become part of Tanzanian culture. Weddings are a big thing — not just a family function as in some other countries but, rather, a community event. Relatives, friends, neighbours and colleagues are invited to be part of it, but not just by attending but also by giving generous financial assistance. Like most things, it starts at the family level, where all the traditional processes such as dowry payments take place. It is the family that sets the wedding date — and the budget.

After that’s decided the family helps to make up special “contribution cards” for the bride and groom, which are delivered to relatives and friends of the family. Contributors are given at least three months to make sure they have ample time to get it together.

Making preparations
But the collection starts as soon as the cards go out. Every weekend, relatives and close friends who form the wedding committee meet to see how much they have collected and how the preparations are proceeding — what is going on with the wedding hall, the decorator and the caterer, and how much else they can pack into the budget.

As the wedding day gets closer, the committee reminds contributors of their promises by sending SMSes, or visiting them in their offices and homes, to make sure they cough up. “As a close dear friend and relative, you are reminded to submit your contribution to fulfil the preparation of my wedding. God bless you!” is the sort of text message that arrives on my phone almost every weekend.

But it’s not just for the wedding that contributions are expected. For the bride, there is also the kitchen party, organised by the bride’s mother and aunts, and it is women-only affair. Of course, guests do not get into the kitchen party for free either. They must contribute money for drinks and snacks, and arrive with a kitchen gift to help stock the bride and groom’s new home.

A week after the kitchen party the bride’s family also organises a pre-wedding party, famously known as a send-off party, which includes all invited guests. At this party guests eat, drink and dance and at the end of it everyone, even those who attended the kitchen party, congratulates the bride to be — and bestows yet another gift on the happy couple.

The big event is normally hosted by the groom’s family. After the religious ceremony, either in church or in a mosque, the party moves to a hall for the reception. More food, drinks and dancing, with, of course, a present for the newly married couple.

Guys like me with many young friends shell out more than R400 every month for weddings or send-off parties. And, as men, we’re lucky — we don’t have to include the kitchen party in our budget.

I am still recovering from what I gave out last month when two close friends got married. I had to contribute about Tsh (Tanzanian shillings) 50 000 (about R220) to Rose’s send-off party and the same amount to Alex’s wedding. But, it didn’t end there. Alex was my roommate at university and he asked me to be one of the groomsmen so I had to buy a new suit, white shirt, a pair of shoes and a tie. I sank about another Tsh300000 (R1 300) — the equivalent of a secondary school teacher’s monthly salary — on just one wedding.

Even the wealthy get their share
I suppose we can blame Julius Nyerere’s “communalism” theories. In Tanzania, the “contribution” is more about sharing than anything else. Even if the family is wealthy, people still contribute in a show of “sharing”. And even though people complain about it they still have to contribute. It’s a kind of “if you do me, I do you” game. When my time comes, I’ll approach all those who I contributed to — a sort of money back guarantee.

But even if it’s all in the spirit of sharing don’t even think of going to anyone’s wedding if you didn’t contribute. Wedding invitations per se are sent out only a few days before the wedding and whether you make the guest list always comes down to how much you contributed. But never mind about how much you gave, it all goes towards making the couple’s big day.