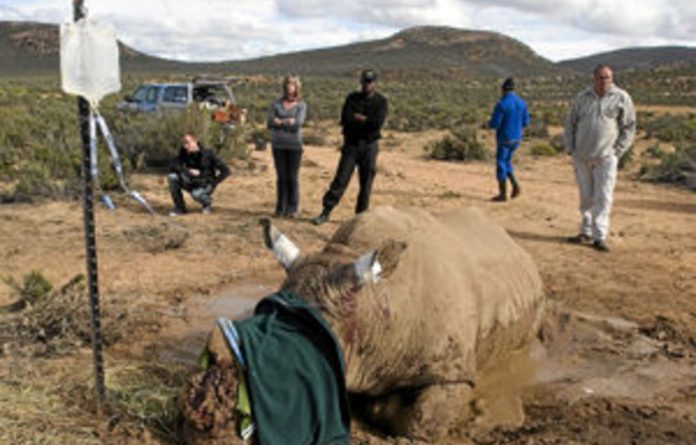 Despite the dramatic increase in rhino poaching in the past few years, “consumer states” such as China, Thailand and Vietnam have not prosecuted one case, according to Joseph Okori, the World Wide Fund for Nature’s (WWF’s) African rhino programme manager.

South Africa will host government delegations from Vietnam and China later this month. The department of environmental affairs plans to discuss rhino poaching and the huge growth of the rhino horn market in those countries. The meetings are part of the department’s plans to engage Asian countries to get a grip on poaching, which has seen South Africa lose 297 rhinos this year, including 16 critically endangered black rhino. At the same point last year 181 rhinos had been poached.

China, Vietnam and Thailand are all signatories to the Convention on International Trade in Endangered Species of Wild Fauna and Flora (Cites), under which only South Africa’s and Swaziland’s rhino products can be traded, and then only with strict permit requirements, which are extremely limited and very difficult to obtain. But poaching is supported by a vibrant black market trade in Asian countries, which is driven by crime syndicates.

The horn is used mainly for medicinal purposes and has reportedly become popular for the treatment of cancer. According to some reports, end consumers are paying more for a gram of rhino horn than they would for a gram of cocaine. According to Okori, the cancer cure claims have become a powerful marketing tool for syndicates, which sometimes use the legend of a senior politician in Vietnam who reportedly cured liver cancer with powdered rhino horn.

The WWF is asking the consumer countries to go after those marketing the horns. Okori said the WWF was extremely disappointed that no prosecutions there had been in those countries, despite 165 arrests in South Africa this year and a number of successful prosecutions.

Next week sees the start of the high-profile Groenewald gang trial, in which 11 suspected rhino poachers, including safari tour operators, veterinarians and a pilot, face charges of killing 20 rhinos and trying to traffic their horns. Last month several poachers were sentenced to 12 years in prison.

A number of Vietnamese, Thai and Chinese nationals have been arrested in South Africa for alleged horn trafficking, including an alleged syndicate leader, Thai national Chumlong Lemtongthai, who is standing trial in the Kempton Park Magistrate’s Court on poaching-related charges.