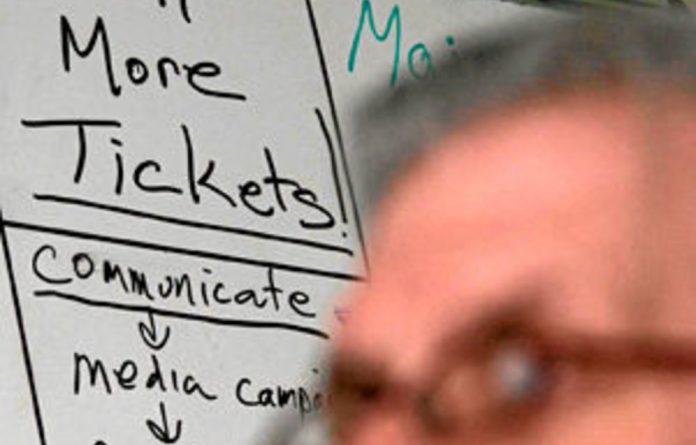 South Africa’s ticketing industry is about to get a kick up the backside because of a new technology that will allow artists, venues and other entertainment suppliers to sell tickets directly to fans and punters via their Facebook pages and websites.

But the launch of this new technology comes at a time when the entire ticketing industry in South Africa is facing upheaval resulting from a Competition Commission investigation into local ticketing giant Computicket’s use of long-term contracts to exclude new entrants from the market.

It was no surprise, then, that when the Competition Commission referred its case against Computicket to the Competition Tribunal in 2010 it was stated that the company controlled more than 96.9% of the South African ticketing market. But things are starting to change, even though the commission’s case has not even made it to the tribunal yet. Sources in the local ticketing industry who spoke to the M&G on condition of anonymity said entertainment venues and groups were already using the imminent tribunal hearing to strengthen their bargaining power with Computicket.

One source said some clients had begun to split their inventory for certain events across multiple ticketing agencies. When Computicket objected to this, the company was told that it would have to accept it unless it wanted the client to join the tribunal hearing as an intervening party.

The commission has already made known its intention to get Computicket to notify all its customers about the hearing and give them the opportunity to file an affidavit related to the proceedings, which makes the threat even more real.

Tixsa and social networking
Tixsa managing director Michael Canfield has been involved in the music industry for many decades as a drummer, venue owner and manager. Lately he and his business partner, Dan Roberts of Terraplane, have been working with artists such as Radio Kalahari Orkes and Die Antwoord.

“One of the things we saw is that things got really weird when we started doing the accounting,” said Canfield. “Ticket fees for the artists were really high and the number of tickets in the venue and the number of tickets that were said to be sold didn’t always agree.” About two-and-a-half years ago Canfield and Roberts began looking into alternatives that could be offered in the South African market and came across TicketBiscuit.

“They don’t take the customer away from the client’s website, they just facilitate the sale of tickets through this whole basket of tools,” said Canfield. “When I saw it I thought to myself: ‘Man, I would have loved to have had this available to me when I was still performing, or even when I was a shareholder in the Blues Room.’

“We launched a year ago and we have gone from having no clients to being the biggest online ticketing business in South Africa. We have just signed Emperors Palace as a client, in fact, the whole Peermont group is moving over to us.”

Canfield believes Tixsa’s new model holds the future of ticketing. “We put software on a client’s website that allows it to sell tickets straight from its website or Facebook page. It captures all the data from the customers and gives the customer the tools to mine that data to build better relationships with those customers. “Laurie Levine is having her launch this Thursday and you can go here and you can buy tickets directly from her page,” said Canfield, as he loaded the Johannesburg singer-songwriter’s Facebook page.

“It’s great. It makes selling tickets a lot easier, she said. “With Tixsa you can also build an email database, which is very useful.” Canfield said the system also offers artists great opportunities to sell merchandise. Different price categories can be used, so a fan can buy just a ticket, or a ticket and a copy of the new album, or a ticket and the new album and a T-shirt.

Garrick Bassil, owner of Johannesburg venue Tanz Café, is also smitten with Tixsa. He said pre-sales were important to live music venues and Tixsa allowed these to happen easily. “It’s very affordable. In fact, it was the most competitive price-wise of all the offerings we investigated.”

Competition Commission case
On May 12 Computicket brought an application to dismiss the commission’s case against it. The tribunal will hear the application on October 13. It is easy to see why Computicket is fighting tooth and nail against the commission’s case. With 96% of the market sewn up through long-term contracts said to be worth more than R150-million, the company stands to lose its stranglehold on the market if the commission wins its case and the tribunal rules that all these contracts are null and void.

This would surely lead to a mad scramble for the market, with a number of players having to compete on price, technology and efficiency. The smaller players in the market include Tixsa, Ticketbreak, iTickets, Web Tickets and Strictly Tickets.

As the commission’s referral affidavit to the tribunal states, none of Computicket’s competitors has more than 3% of the market. So if the tribunal hearing decides against Computicket, the upswing for these players could be huge.

Hoffman, whose company is behind the annual Oppikoppi festival, said Computicket was very expensive, charging as much as 10% commission on ticket sales. Taking this year’s festival as an example, he said the 10% stake on 16 000 tickets costing R500 each was a huge amount — R800 000 to be exact. “It’s complete bullshit. Computicket is very good at maintaining its monopoly.”

The affidavit, which was lodged with the tribunal last year, states that Computicket has more than 1 155 long-term contracts with inventory providers. It quotes a clause from Computicket’s contracts that states: “Client agrees, for the duration of this agreement, not to instruct or allow any other party to accept bookings or sell or distribute tickets to any event without the consent of [Computicket].”

The commission concludes that “by virtue of the exclusivity clauses contained in Computicket’s contracts with inventory providers, competitors are prevented from access to almost all the customers (inventory providers) in the relevant market”. It also points out that Computicket’s behaviour is reinforced by some of its documents, which state that its mission is to grow its business by “marginalising our competitors in the ticketing industry”.

The commission argues that consumers have experienced higher prices as a result of “the loss of competition” than they would have if there had been competitors. The M&G put questions to Computicket this week and received a response from its shareholder, Shoprite Holdings, stating that it was not in a position to comment “at this time because it will anticipate events”.