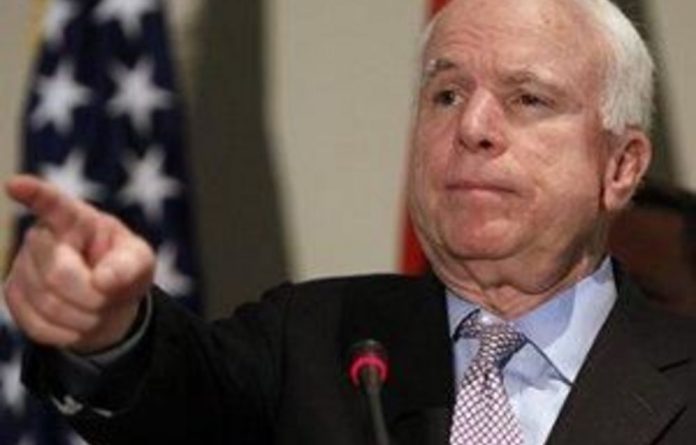 Human Rights Watch has called on Libya’s new rulers to stop armed groups from rounding up suspected Muammar Gaddafi supporters and abusing them, saying that some detainees reporting beatings and electric shocks had the scars to prove it.

The treatment of prisoners has become a litmus test for the transitional government as it tries to rein in young men who fought in the civil war that ousted Gaddafi and now refuse to lay down their weapons.

The New York-based rights group said on Friday it had visited 20 detention facilities in Tripoli and interviewed 53 inmates, including 37 Libyans and 16 sub-Saharan Africans. Five were considered “high value” because of their positions in Gaddafi’s government, the report said, without elaborating.

Human Rights Watch, which said it was given unrestricted access to the detainees, said the allegations were even more troubling because Gaddafi’s regime was known to torture and kill inmates in its prisons.

‘Arbitrary’ arrests
“After all that Libyans suffered in Muammar Gaddafi’s jails, it’s disheartening that some of the new authorities are subjecting detainees to arbitrary arrest and beatings today,” said Joe Stork, the organisation’s regional director. “The NTC [National Transitional Council] owes it to the people of Libya to show that they will institute the rule of law from the start.”

Libyan officials have pledged to respect human rights, but they have struggled to bring discipline to the largely untrained fighters who took up arms against Gaddafi.

The group said it was encouraged that the de facto prime minister, Mahmoud Jibril, promised to make ending prisoner abuse a priority. “Prisoner abuse of any kind is not acceptable,” he was quoted as saying. “We joined the revolution to end such mistreatment, not to see it continue in any form.”

The group said some of the dark-skinned Libyans and detainees from sub-Saharan Africa were even forced to do manual labour, including carrying heavy materials, cleaning and renovating buildings around Tripoli or on military bases.

Human Rights Watch blamed part of the problem on a lack of oversight and security forces operating with little experience. It gave credit to some groups, saying one apparently issued arrest warrants, conditions had improved in some facilities and some abusive guards had been arrested themselves and replaced.

But the group urged the NTC to make it a priority to bring the various neighbourhood militias and security brigades under a unified command and set clear standards for their conduct.

The report was based on prison visits between August 31 — nearly two weeks after revolutionary forces seized control of Tripoli after days of fierce battles with Gaddafi’s supporters — on Thursday. HRW said thousands had been jailed, including women and children, and none had been brought before a judge.

Daily beatings
Detainees who reported abuse said guards had beaten them, sometimes on a daily basis. The names of detainees and facilities were not released because of fear of reprisals against those interviewed.

A sub-Saharan African identified only as Mohammed wept as he showed Human Rights Watch welts on his arms, back and neck that he said were from beatings by guards at a small detention center.

Seven prisoners in two facilities, including women, said guards had given them electric shocks.

United States Senato John McCain, a Republican from Arizona, raised the issue of prisoner abuse on Thursday as he led a Republican delegation to Tripoli. In a message to Libyans, he said the world was inspired by their success in overthrowing Gaddafi but they must respect human rights.

“This can be a showcase of what the Arab Spring is all about, but if you don’t watch it, you can go backward even here,” he said.

The Republican delegation was one of a series of visits by foreign leaders and dignitaries as the international community rallies around Libya’s new leadership, which is struggling to form a new government despite continued fighting on three fronts.

Italy’s Foreign Minister Franco Frattini travelled to Tripoli on Friday. He said his country has authorisation to unfreeze €2.5-billion in frozen Libyan assets to help the North African nation rebuild.

Italy is sending a team of experts to discuss how to disburse the funds to best help the Libyan people.

Jibril, the prime minister, has asked the UN Security Council to lift some economic sanctions that had been imposed on Gaddafi’s regime and allow the release of tens of billions of frozen dollars to the transitional government. Some countries have won approval to release funds on a limited basis.

“The decision is taken, authorisation is there,” Frattini said at a joint news conference with Jibril. “Now upon request of the Libyan friends we will be able to mobilise … money for urgent projects.”

Frattini — who was in the then-rebel eastern stronghold of Benghazi in May — also noted the Italian energy giant Eni has signed an agreement to reactivate oil and natural gas plants under Italian management and hopes to get natural gas, another mainstay of Libya’s economy, flowing to Italy again through the Greenstream pipeline by October. – Sapa-AP