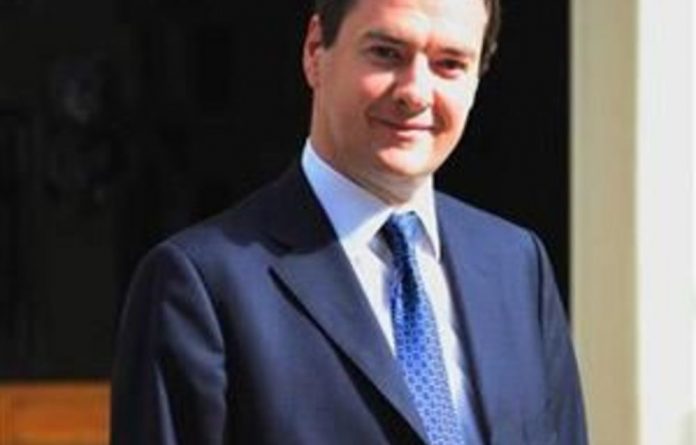 Britain must stick to its austerity drive and avoid tax cuts while it tries to wipe out a record deficit, finance minister George Osborne said on Saturday, as a senior member of his party accused him of lacking a “coherent and credible” long-term growth plan.

Speaking before his centre-right party meets for its annual conference, Osborne said abandoning its public cuts and tax rises would lead to an immediate rise in interest rates that would be “disastrous” for the British economy.

A run of bleak United Kingdom economic data, the eurozone debt crisis and worries about the global outlook have stoked fears that Britain could tip back into recession.

The economy has barely grown since September, raising pressure on the Conservative-led coalition to soften its deficit-reduction strategy and do more to stimulate growth.

Osborne said the world’s economic state was “at least as serious” as during the 2008 financial crisis and Britain had to keep cutting its deficit.

“A country with an almost double-digit deficit cannot add to its deficit in the middle of a sovereign debt storm to cut tax, presumably on a temporary basis, because you would have to then put it back up again to deal with the deficit,” he told the Daily Telegraph newspaper.

“I don’t think Britain has the fiscal luxury to do that sort of thing.”

The coalition has repeatedly warned that failing to cut a record peacetime budget deficit that peaked at around 11% of gross domestic product (GDP) could lead to a Greek-style debt crisis.

However, some centre-right Conservatives fear the austerity plan will alienate voters already struggling with rising unemployment, low wage growth and inflation running at 4.5%, more than double the 2% target. The left-wing opposition Labour Party says the plan is choking growth.

Tyrie, a former adviser to two British finance ministers, said he supported the government’s attempts to cut the deficit but warned that its longer-term growth plans needed “radical improvement”.

“There is much to do, and it is not just a question of gaps in policy,” he was quoted as saying by the BBC on Saturday. “A coherent and credible plan for the long-term economic growth rate of the UK is needed.

“The age of abundance has been replaced by the age of austerity. Current policy does not adequately recognise the fact.”

Britain’s involvement in the Libya conflict, spending on overseas aid and promotion of green policies and localism were either “irrelevant” or “contradictory” to the search for growth, Tyrie added.

His criticism highlights the strains in the Conservative-led coalition over how to revive an economy that has barely grown since September, while trying to cut the deficit.

With interest rates at a record low of 0.5%, Business Secretary Vince Cable has urged the Bank of England to expand its £200-billion programme of asset purchases. The central bank holds its next policy meeting on Wednesday and Thursday. — Reuters