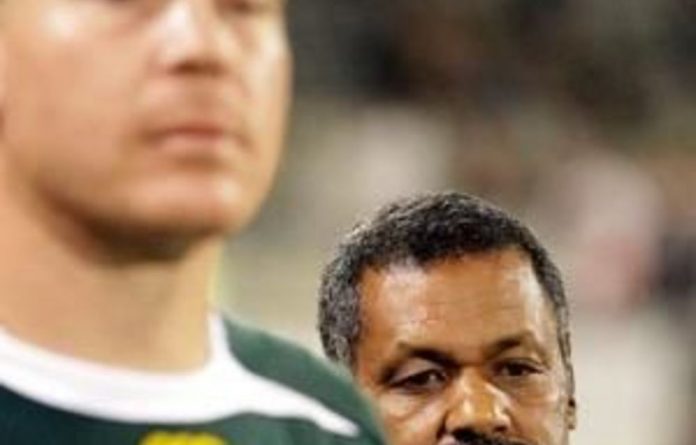 While the other teams who have reached the World Cup quarterfinals have made a show of being blasé, Bok captain John Smit admits the pressure’s on — and the nerves tight.

Springboks captain John Smit has come out and said what other teams at the Rugby World Cup may be thinking but don’t like to admit: that in the knockout rounds the stakes get higher, the nerves tighter and the pressure a whole lot harder to handle.

Australia and Wales had their game faces on when addressing the same question on Monday, deflecting it with practiced verbal fends: that the quarterfinals are “just another game,” that they’ve been in similar situations before.

But Smit would have no pretence. The captain of the reigning world champions, a 110-Test veteran, is nervous and not scared to admit it.

He told reporters in Wellington on Monday: “One thing’s for sure. The real World Cup starts this week.”

“It’s definitely a tournament that’s set up in two stages,” Smit said. “This is the stage where every game is do or die so it’s a different level completely.

South Africa plays Australia, the only other two-time World Cup champion, in its quarterfinal match in Wellington on Sunday and Smit, for all his foreknowledge of the Wallabies and his long experience, can’t shake the nerves the occasion inevitably brings.

“I’ve been trying to get rid of those nerves for 110 Tests now but they don’t go anywhere,” Smit said. “Pressure’s what makes the game beautiful and what creates some special performances. Without those nerves I don’t think you ever quite reach the top of the game.

“There will be nerves and I think some of the guys who haven’t been around the World Cup will feel a different kind of vibe this week. It’s really how you deal with it and how you use that to your advantage.”

Wales: Ah, we’re used to it
Wales defence coach Shaun Edwards told reporters that his players were inured to a certain degree to the pressure of knockout rugby by their experience of it in British and European competitions.

“It’s just like a Heineken Cup situation where you have your group stages and then you’re into a sudden-death situation, so our guys are used to that, as are the Irish lads.”

Wales plays Ireland in its quarterfinal on Saturday and, while Edwards expects the match to be close, he isn’t dwelling on issues of pressure or nerves.

“It’s a 50-50 game,” he said. “It’s pretty hard to pick the winner. They are two teams that have run into a bit of form, relatively injury-free.

“The Irish, after being criticised for their pre-World Cup form, are obviously running into some very strong form themselves.”

Australia: Every game’s been a knockout game
Australia captain James Horwill said his team had already been under pressure after losing to Ireland in pool play and was now used to that experience.

“After the Irish game, every game was a knockout game for us,” Horwill said. “We couldn’t drop a game. The mindset is that we have to do everything in our power to win and that’s what we’re going to be doing this weekend.”

“The teams that lose concentration for a split second on the weekend are going to be the teams that are going home,” he said. “I don’t think it’ll come down to much more than that.

“There’ll be one or two opportunities to win this game on Sunday and the teams that are up for it and ready to take those chances will be the ones that’ll be staying.”

South Africa ‘undercooked’
Smit said the results of pool matches played by the eight teams that have gone on to the quarterfinals may be irrelevant from now on. But the matches themselves were not, setting teams up for the high-pressure task they now face.

“If you’ve got this far you’ve done well,” he said. “You’ve been successful in your pool and those pools, especially for us, have been invaluable because we came in pretty undercooked into the tournament.

“So having the game time, being able to see what your combinations are like and seeing how players are able to get into form, that’s been a big asset for us and I think it has also been for the other teams.

“Now, pretty much everyone’s on the same level so the results of what’s happened are probably irrelevant and put us all on the same footing, but I think the experience over the last four will be helpful for the eight teams that are through.” — Sapa-AP