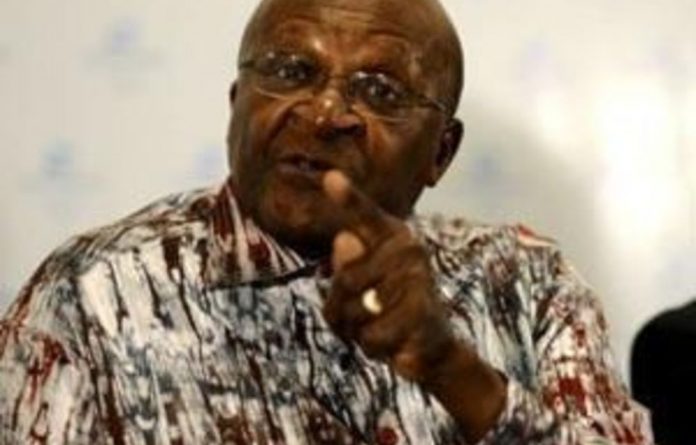 “We were expecting we would have a government that was sensitive to sentiments of our Constitution,” Tutu said.

“The trouble is that the ANC on the whole reckons that the freedom that we enjoy is due to them. They reckon everyone else is just a sideline.”

Tutu shouted and shook his finger as he spoke: “Hey Mr Zuma, you and your government don’t represent me. You represent your own interests.

“I am warning you out of love. I am warning you like I warned the nationalists that one day we will start praying for the defeat of the ANC government. You are disgraceful.”

“The nationalists had a huge majority. They ate dust,” Tutu said.

He said the ANC had a large majority, but so did former Egyptian president Hosni Mubarak and former Libyan leader Muammar Gaddafi, both of whom were overthrown in popular uprisings.

Tutu said South Africa was helped by the international community to overcome apartheid.

“People who supported us in our struggle … those people are weeping. They are saying South Africa, it can’t be,” he said.

“You have to wake me up and tell me this is actually happening here. It is quite unbelievable the discourtesy they have shown to the Dalai Lama.”

“People were opposed to injustice and oppression and people believe that we South Africans would be on the side of those who are oppressed. Tibet is being oppressed,” he said.

“Our government, representing me, says it will not support Tibetans who are being oppressed viciously by the Chinese.”

He said he once listened to one of Zuma’s state of the nation speeches as the president paid tribute to everyone, apart from religious leaders, in bringing about democracy.

“I listened to this president paying tribute to all kinds of people who had helped bring about democracy in this country,” Tutu said.

“This president did not mention a single religious leader. Let the ANC know that they can not airbrush us out.”

Tutu said International Relations and Cooperation Minister Maite Nkoana-Mashabane had not been truthful when she had said the Dalai Lama could come to South Africa at any time.

“Two years ago the minister … said the Dalai Lama can come any time.

“Either she was being very economical with the truth or she didn’t know her work. She should have known that it was unlikely they would [let him come]. The discourtesy is mind-blowing.”

Tutu said former president Nelson Mandela once told the United States not to tell him how to choose his friends when he was challenged about South Africa’s close ties with Cuba.

“When you think Madiba able to say to most powerful country, look you don’t choose our friends for us … To say that to the US about Cuba, it takes something, but he did and they did nothing. If anything their respect for him grew.”

Tutu said he would not invite the Dalai Lama to South Africa again.

“I don’t think I would put him through this kind of thing again,” he said. — Sapa