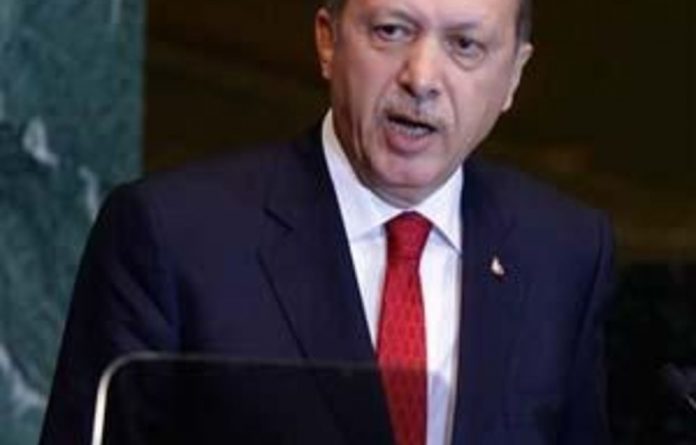 Turkey said on Wednesday it would impose sanctions on Syria despite the blocking of any United Nations (UN) measures against President Bashar al-Assad for his violent crackdown on dissent.

Russia and China handed al-Assad a diplomatic victory on Tuesday by vetoing a Western-backed UN resolution that would have hinted at future UN sanctions on Damascus, but Turkish Prime Minister Tayyip Erdogan promised action of his own.

“Naturally the veto … cannot prevent sanctions,” Erdogan said. “We will of necessity implement a package of sanctions.”

Erdogan, who is visiting South Africa, has said he will announce the package after he visits a Syrian refugee camp in Turkey in the next few days.

The double veto by Moscow and Beijing infuriated Western powers which have already imposed their own sanctions on Syria and were trying to pave the way for a UN embargo, and will reinforce al-Assad’s hold on power — at least in the short term.

Moscow had voiced concern that the resolution could have pave the way for a Libya-style military intervention. Russia and China both want to limit Western influence in the Middle East.

Al-Assad has used tanks and troops to crush an uprising which erupted in March, inspired by regional revolts which toppled three North African leaders this year.

The United Nations says 2 700 civilians have been killed. Damascus blames the violence on foreign-backed armed groups which it says have killed at least 700 security personnel.

Syria’s economy is reeling from the impact of the unrest and US and European sanctions on the small but key oil sector.

Al-Assad ‘reinforced’
“The mere fact that al-Assad can avoid international sanctions for the time being reinforces his position in the short term,” said Ayham Kamel from the Eurasia thinktank.

“Al-Assad is going to remain in power in the near term. I don’t think there are signs of imminent collapse but Syria faces challenges across the country — the economy, insecurity across the country, and a more organised opposition.”

Syria banned most imports last month to try and conserve dwindling foreign currency reserves, but rescinded the measure on Tuesday after a spike in prices and disquiet among an influential merchant class that has been backing al-Assad.

Al-Assad faces a more united opposition after groups in exile came together in Istanbul on Sunday to call for his downfall.

“The [Syrian] leadership is losing the respect of its people,” said Erdogan, whose country has given refuge to a Syrian colonel who has joined the anti-al-Assad revolt.

After months of peaceful protests, some army deserters and dissidents have taken up arms, prompting military operations against them, especially in areas bordering Turkey and Jordan.

Syrian opposition groups meeting in Istanbul on Sunday appealed for international action to stop what they called indiscriminate killings of civilians by the Syrian authorities, but rejected any Libya-style military intervention.

Serving ‘foreign interests’
Fighting erupted in the rugged Jabal al-Zawiya region of Idlib on Tuesday during army raids on the towns of Sarjeh and Shinan, where deserters were reported to have taken refuge, activists said, adding that at least two villagers were killed.

“These are rugged or agricultural regions. The regime cannot control them unless it commits more troops, and then it risks more defections,” said an activist in Idlib, near Turkey.

The state news agency said “armed terrorist groups” killed a member of the security forces in an ambush in Idlib and lightly injured another in a bomb attack on a patrol in the city of Hama, which the army took over July to subdue protests.

Colonel Riad al-Asaad, the officer in hiding in Turkey, said last week that 10 000 soldiers had deserted the army, but authorities have denied any army defections, saying the military operations were a response to appeals by residents.

Assad retains control of the military, whose mostly Sunni Muslim rank and file are commanded by officers of his minority Alawite sect that also dominates the security apparatus.

Syria has mostly closed its doors to independent media, making it hard to verify events, but a trickle of desertions appears to have gathered pace in the last several weeks.

State television broadcast an interview on Tuesday with a young woman it said Amnesty International had reported last month as dead, possibly killed while in state custody.

Zainab al-Hosni (18) from the city of Homs, a hotbed of anti-Assad protests, was found in a morgue by her family, Amnesty said last month. She had been decapitated, her arms cut off and skin removed, the rights group said.

Syrian TV showed what it said was Hosni’s identity card, saying her death had been faked to “serve foreign interests”. — Reuters

Although the overall rate of conflict has remained steady in Africa during the past 10 weeks of the pandemic, the nature of this is changing in subtle but significant ways
Read more
Opinion

By threatening students and academics, the Indian government seeks to create a compliant nation. But it is also a push towards disaster
Read more
World

For Syria Kurds, the end of autonomy?

As President Bashar al-Assad's forces deploy towards the northern border, is the Kurdish minority giving up on autonomy?
Read more
Advertising
Continue to the category
National