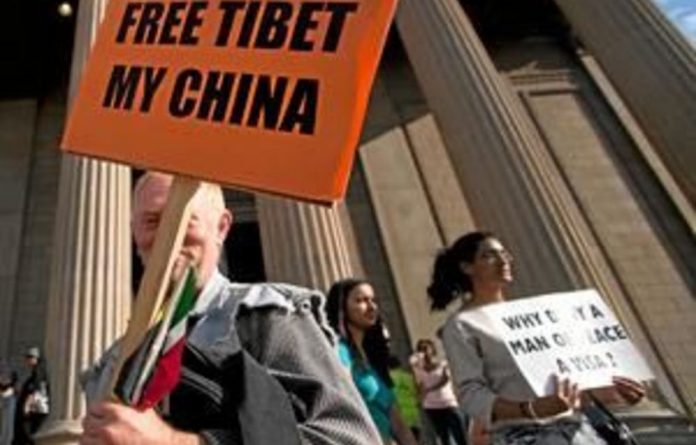 The Chinese government is increasingly using economic pressure to bully foreign governments into not meeting the Tibetan spiritual leader, the Dalai Lama, according to a recent study by two German economists.

In their research paper, “Paying a Visit: The ‘Dalai Lama Effect’ on International Trade”, Andrea Fuchs and Nils-Hendrik Klann wrote: “Meetings of a head of state or head of government with the Dalai Lama lead to a reduction of exports to China by 8.1% or 16.9% on average, depending on the estimation technique used.”

The economists said that the effect was mainly driven by reduced exports of machinery and transport equipment. However, it disappeared in the second year after a meeting took place.

Fuchs and Klann cited several examples of how China had used its economic muscle to punish countries that had invited the Dalai Lama to visit.

“The growing assertiveness of the Chinese administration towards foreign dignitaries’ meetings with the Tibetan leader reflects China’s rising economic power. As such, this growing economic power provides China with the leverage needed to advance its political interests,” they said.

Economic and diplomatic relations between China and France began deteriorating, they said, after President Nicholas Sarkozy met the Dalai Lama in spite of threats from Chinese authorities should they do so.

France was crossed off the travel agenda of two Chinese trade delegations in 2009. In the same year, Chinese Prime Minister Wen Jiabao did not pay a state visit to France during his trip to Europe.

Asked to comment on the itinerary of his European tour, Jiabao was quoted as saying: “I looked at a map of Europe on the plane. My trip goes around France. We all know why.”

Wrath of the Chinese
The United States had also suffered the wrath of the Chinese since President Barack Obama met the Dalai Lama in February last year. The economists said the move soured relations with China, which undermined the US’s recovery from the current economic crisis.

Recent meetings between the Dalai Lama and leaders in Mexico, the United Kingdom, Italy, Mongolia and Germany had also damaged relations with the Asian giant.

“With the rapidly increasing size of the Chinese economy, the asymmetry of trade between China and its trading partners is shifting in China’s favour,” said Fuchs and Klann.

“This development enables China to enforce political compliance among its trading partners to an ever increasing extent.”

This week, political commentators said this could explain why the South African government was apparently poised to reject the Dalai Lama’s visa application to attend Archbishop Emeritus Desmond Tutu’s 80th birthday celebrations — apparently it was afraid of a Chinese backlash that could have resulted in billions of rands in investments being halted or reduced.

The Mail & Guardian was told by reliable sources that China could have put pressure on President Jacob Zuma’s administration not to issue the visa because it would “harm trade ties with China”.

“In this saga, we had to put our national interests first,” said a government source. “We have a lot invested in China and support the one-China policy. Are we prepared to compromise that by taking an unprincipled action and supporting Tibet’s secession from China? No.”

Zuma visited China for the first time in August last year, accompanied by a 300-strong business delegation, and signed a comprehensive strategic partnership with the country that would result in more than R100-billion invested in South Africa over five years to support projects in culture, education, media, health, tourism and financial services.

Last week, Deputy President Kgalema Motlanthe raised more than R20-billion of investment during his visit to Beijing as part of the partnership. Motlanthe has denied accusations that he was put under pressure by Beijing not to grant the visa to the Dalai Lama.

But Tutu insisted during his press conference on Tuesday that South Africa had bowed to pressure from Beijing.

Penalties
Matthew McDonald, a research analyst at the Centre for Chinese Studies in Cape Town, said China was resolute in its stance of non-interference and countries that invited the Dalai Lama were slapped with severe penalties.

“France has suffered contract cancellations and several African states have also incurred penalties,” said McDonald. “This is something that should not be the case if we are thinking about a partnership of equals. Pretoria would be ill-advised to alienate Beijing.”

However, McDonald said proper publicity management would have clarified that this was a private visit to a private South African citizen and that under “our laws, such things are permissible and not state related”.

“South Africa, regardless of its friendship towards China, does have a sovereign foreign policy and should not be afraid to explain it.

“Where is an independent South African foreign policy here?”

The Dalai Lama cancelled his trip to South Africa on Tuesday after lengthy prevarication by the South African authorities over whether to grant him a visa to enter the country, sparking an international furore that has left many people questioning the bona fides of the ANC’s solidarity with people seeking national liberation.

Tutu invited the Tibetan spiritual leader, a fellow Nobel Peace Prize winner, to give an inaugural peace lecture as part of celebrations for his 80th birthday on Friday.

The Desmond Tutu Peace Centre has not given up hope of inviting the Tibetan leader and wrote an open letter to Motlanthe on Thursday on the issue.

Asked on Tuesday whether the government would have given the Dalai Lama a visa if he had not cancelled his visit, Motlanthe was quoted in the Star as saying: “Of course, he has been here before. I don’t see why it should be an issue at all.”

Statistics show that, by the end of July 2011, China had already invested $4.2-billion in South Africa and had raised the country’s credit line to $20-billion.

Zuma, ANC hurt by Tutu utterances
President Jacob Zuma and his Cabinet ministers were hurt and “disturbed” by Archbishop Emeritus Desmond Tutu’s virulent attack on the ANC government over the Dalai Lama saga, according to Lindiwe Zulu, Zuma’s special adviser on international relations.

Reacting to the Dalai Lama’s cancellation of his intended trip after South Africa’s protracted failure to grant a visa, Tutu angrily told a media conference that the ANC government was worse than its apartheid counterpart and that he would pray for its downfall.

Said Zulu in an interview on Wednesday: “Tutu, whom we all respect for his contribution to the struggle, even if he is not a member of the ANC, has disappointed us in the way he responded.

“We find it unacceptable that he could equate this government to the apartheid regime, which was racist, oppressive and committed crimes against humanity —

“Everyone is disturbed by what he said about government and the ANC and asking themselves if he could really say the things he said, even if he was angry.”

But Zulu said that the government and the ANC would “find the time and space to meet Tutu and engage him about the issues surrounding the visa debacle and his comments”.

“We want to find out from him if this is about the Dalai Lama or something much more than this.”

She said she wondered whether “the hype he has created” was in the best interests of South Africa.

Zulu said “not once did the government ever say we are not issuing the visa.

“The government has a right to process visas and raise questions if there are issues with the application.

“But, I repeat, we never said we are not giving the Dalai Lama the visa.”

During his visit to South Africa, the Dalai Lama was set to deliver a lecture on peace and compassion at the University of the Witwatersrand in Johannesburg.

On Thursday, there were frantic attempts to persuade him to deliver a lecture at the University of Western Cape on Saturday through a video link.

Tutu had invited the Tibetan spiritual leader, a fellow Nobel Peace Prize winner, to give an inaugural peace lecture as part of celebrations for Tutu’s 80th birthday on Friday
The Dalai Lama announced what he called his retirement from politics in March this year.