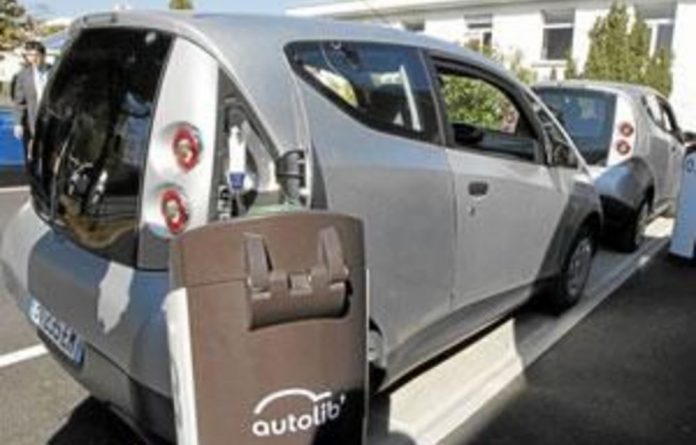 Et voilà! Say bonjour to the electric Bluecar. Hot on the wheels of Paris’s self-service bicycle scheme Vélib’ comes Autolib, a car-sharing idea that the city claims is a world first.

By 2013 officials hope to have around 5?000 Bluecars zipping around Paris, cutting down noise and air pollution and discouraging car ownership. On a sunny Sunday on the Avenue Trudaine, the family-friendly part of the 9th arrondissement, a curious crowd gather around a line of Bluecars brought in for a two-month trial.

As the more adventurous sign up for a test drive, bemused diners at a nearby café watch the electric cars — which are not actually blue but unpainted aluminium — nipping up and down the street. There are no complaints about fumes or noise because neither exist. If you can’t see a Bluecar you wouldn’t know it’s there.

Annick Lepetit, in charge of transport at city hall, is on hand to declare the Bluecar the future of urban motoring and praise the vision of Bertrand Delanoë, the Socialist mayor who devised both Autolib and its two-wheeled forerunner. Owning your own car, says Lepetit, is just so passé. “Private cars are expensive and people are using them less and less in cities,” she says.

“We’re moving into another culture, the culture of car sharing. It’s the same principle as Vélib’: you use the car, leave it and that’s it. Simple.” The enthusiasm from Lepetit continued: “I’ve driven one and they’re better than good; they’re incredible. They’re ecological and economical. It’s a real revolution and I can see it being copied in other cities.”

Jacques Bravo, mayor of the 9th arrondissement, takes a spin in a Bluecar and returns converted to its merits. “We had to stop and ask a pedestrian to get out the way because the car was so silent.” So far, so self-congratulatory. But not everyone is convinced. “I’ve lived here for 30 years and nobody asked us if we wanted this,” says an angry local. “Is that what you call democracy?”

It could be that his rant referred to billionaire industrialist Vincent Bolloré, whose company has reportedly invested €1-billion in the Bluecar and is making the special batteries to power it. Bolloré is also a friend of President Nicolas Sarkozy. “This is all about friends with friends,” mutters the unhappy passerby.

Morald Chibout, Bolloré’s man at the scene, shrugs and says the transport revolution, expected to make his company a handsome profit within seven years, will not be derailed. He says the firm has already been approached by “several other cities”. Is London one of them? He gives an enigmatic smile. He won’t say.

Somehow it’s hard to see Boris Johnson, the London mayor, fitting behind the wheel of a Bluecar, or Jeremy Clarkson test-driving one. The vehicle has been described as a “bubble car”, but looks more like the Smart car’s bigger brother. For those interested in the spec, it’s worth mentioning that it was designed by the Italian firm that makes Ferraris. But that’s where the similarity ends.

The Bluecar goes forwards and backwards, has four seats, a tiny boot and an automatic gearbox. Plug it in for eight hours and it will go from 0-100kpm in 6.7 seconds, with a top speed of 130kph. It’ll last for around 250km a charge. It also boasts a GPS to stop drivers getting lost — and perhaps to allow Autolib authorities to keep track of you. If you prang it, there’s a big blue button to call for assistance.

Before hiring a car, drivers must register at Autolib’s office in central Paris or kiosks located near pick-up stations. A driver’s licence, ID and credit card are required, along with a returnable deposit. Users will be able to sign up for daily, weekly or annual membership and prices range from €10 to €144 for a year, depending on the length of time the car is used.

What’s not to like? It’s clean, green, cheap, compact, comfortable and surprisingly nippy. But life just got a whole lot more dangerous for the long-suffering Paris pedestrian. If you get flattened by a Bluecar, you won’t even have heard it coming. —

A transformative approach to investment

The electrification of transport could transform our future