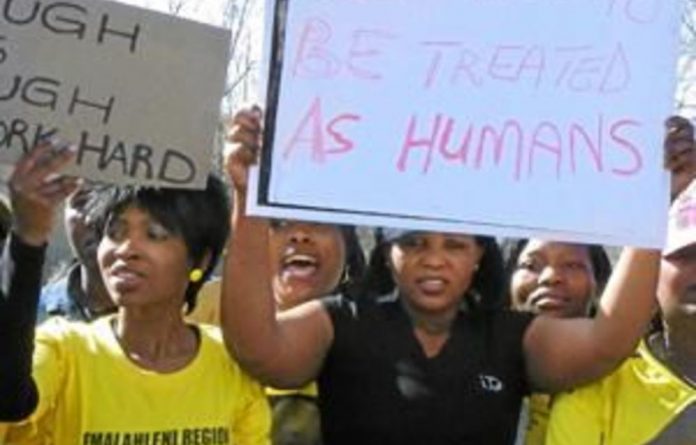 About 40 angry Newcastle clothing and textile employers have closed their factories and locked out about 7 000 workers in protest against a raid on Chinese factories in the area last week to enforce compliance with labour laws and bargaining council agreements.

After raids on 12 Chinese factories one operation was closed by written order. Employers saw the raid and closure as an intensification of a campaign by the South African Clothing and Textile Workers’ Union (Sactwu) to pressurise “non-compliant” clothing factories.

The raids on September 29 involved teams of up to 15 members each simultaneously combing factories for about five hours. In addition to police, the teams comprised representatives of the departments of labour and home affairs, Sactwu and the national bargaining council for the industry.

Employers fear that the Newcastle crackdown could foreshadow a jobs bloodbath in the industry. About 470 clothing factories in South Africa — accounting for about 28 000 workers, or about half the total workforce — are thought to fall foul of the bargaining council’s minimum wage rates. The factories say the wages cannot be sustained in the face of rising clothing imports.

Last year the council began executing writs to close non-compliant factories. But in an attempt to save jobs a negotiated “breathing period” gave the factories until March to reach 70% of the council wage rates, rising to 90% in December and 100% in February next year.

The factory that was closed in Newcastle — with another in Ladysmith — failed to meet the 70% requirement.

Newcastle has about 70 clothing and textile factories and factory owners there have been particularly vocal in opposing the council’s wage minimums.

‘Uncompetitive industry’
The bargaining council’s minimum wage will be about R550 a week next year, with variations according to area. Both compliant and non-compliant owners complain that this level will make the South African industry uncompetitive.

Ahmed Paruk, who chairs the United Clothing and Textile Association, which represents 28 Newcastle factories, said the lockout was an expression of anger by the owners because those who were raided were treated like criminals.

He said he believed the raids and the writ of closure were instigated by the union because the high sales season was approaching and also because Sactwu wanted to deflect attention from an inquiry into the disappearance of R100-million from its pension funds.

The raids also preceded a court case being brought by his association to challenge the wage agreement and the bargaining council system.

However, the raiding parties uncovered safety hazards, illegal workers, inadequate and unhygienic toilet facilities, failure to register for or pay contributions to the unemployment insurance and workmen’s compensation funds in some factories, as well as non-compliance with the 70% wage requirement.

Paruk said his members were “no angels” but were under extreme cost pressures. He said a bargaining council deal announced this week that allows new entrants to be paid 30% less than the minimum wage would make little difference, because new entrants were unskilled and would have to be trained at extra cost.

According to Paruk, the bargaining council wanted to close another 14 factories immediately, but he had asked its compliance manager to hold off for seven days to allow employers to meet the 70% requirement. He expected the bargaining council to agree, but if it did not, the lockout would continue indefinitely.

Paruk added that whatever the immediate outcome, the 90% and 100% wage levels that must be reached within a few months would probably be too much for his members to pay.

If an industry-wide solution was not reached, Paruk expected the industry to shrink further. The workforce had already declined from about 200 000 employees a few years ago to about 56 000 now. He said his members wanted the whole industry — manufacturers, retailers, unions and the government — to formulate a sustainable solution.

Sactwu said this week that it regarded the factory closures “as a continued act of defiance and disrespect for our country’s laws”.

“Once again, workers are being treated like dirt by Newcastle employers. There has been no engagement with the union about these closures, as the law requires. Sactwu will take every possible step … to ensure that workers’ rights … are protected.”

The UIF, with surpluses in the region of R156-billion, has helped rescue the embattled retailer, which owns Jet, Edgars and CNA
Read more
Business

But the retailer’s recapitalisation plan rests on securing a new investor, and its landlords and lenders being on board.
Read more
Advertising
Continue to the category
Politics