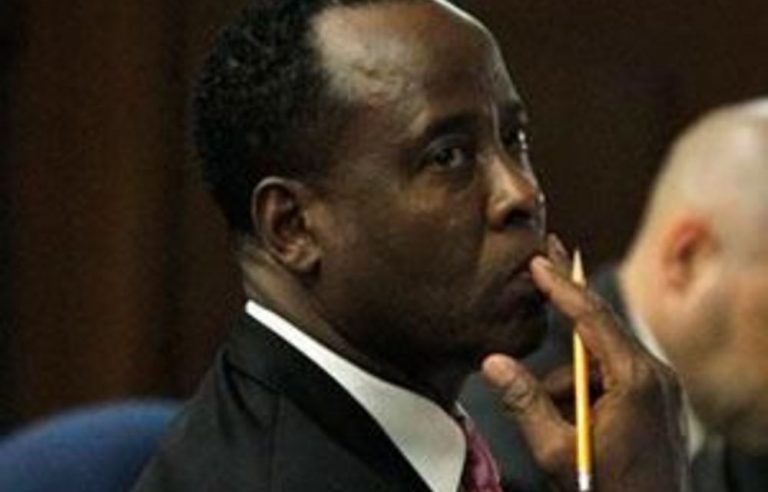 A police interview with the doctor charged in Michael Jackson’s death is expected to be played for the first time in public on Friday as prosecutors let jurors hear Dr Conrad Murray’s version of events in the final hours of the singer’s life.

Murray’s interview two days after Jackson’s death on June 25 2009 is one of the last big pieces of evidence prosecutors have to present against him. Murray details his treatment of Jackson, including his administration of the anaesthetic propofol, during the more-than two-hour talk.

The interview will be played during the trial’s ninth day after defence attorney J Michael Flanagan finishes cross examination of coroner’s toxicologist Dan Anderson, who on Thursday said propofol was found in various parts of the singer’s body, his blood and urine during an autopsy. The amounts found led coroner’s officials to conclude that Jackson died from acute propofol intoxication, with other sedatives administered by Murray contributing to the singer’s death.

Murray has pleaded not guilty to involuntary manslaughter and faces up to four years behind bars and the loss of his medical licence if convicted.

Defence attorneys say Jackson gave himself the lethal dose after Murray left the room. Flanagan attempted on Thursday to get Anderson to say that high levels of the sedative lorazepam found in Jackson’s stomach meant that he swallowed the drug himself.

Anderson told jurors he couldn’t determine that based on the information he had.

On Friday, Flanagan repeatedly asked Anderson to try to draw a connection between the levels of drugs found in Jackson’s system and how they were administered and in what doses. Anderson said it was beyond his expertise.

Flanagan asked whether Anderson focused too much on propofol and should have also considered the effect the sedative lorazepam had on Jackson’s body.

“The propofol in any case that we handle is important, probably more important than many of the other drugs that we deal with,” Anderson said.

According to search warrant affidavits, police said Murray detailed his treatments of propofol and other drugs to try to get Jackson to sleep.

The cardiologist, who was accompanied by an attorney during the interview, told detectives that he had been trying to wean Jackson off propofol because he was afraid he was addicted. He told the police he had given the singer other sedatives, including lorazepam and midazolam, in the hours before Jackson’s death, but that the singer couldn’t fall asleep.

Detectives wrote that Murray told them he only left Jackson alone for a couple minutes when he returned around 11am on June 25 2009 to find the singer had stopped breathing. Murray’s attorneys have disputed the police description of the timeline and say the doctor returned to find Jackson unresponsive around noon.

In the interview, the physician also told detectives that other doctors had given Jackson propofol as a sleep aid in the past. The singer called it his “milk”, according to descriptions of the interview included in search warrant affidavits.

The doctor also told police during the question-and-answer session where vials of propofol that remained in Jackson’s rented mansion could be found. The disclosure led police to search the singer’s bedroom and closet two days after the interview and turned up an IV bag, several drugs and creams to treat vitiligo and bottles of propofol.

Lead defence attorney Ed Chernoff on Thursday attacked the credibility of a coroner’s investigator who collected evidence at the house on the June 25 and June 29 2009 searches of Jackson’s home. Chernoff noted that investigator Elissa Fleak had moved items in the room and failed to note in a report until nearly two years after Jackson’s death that she had found a bottle of propofol inside an IV bag.

Jackson’s bodyguard Alberto Alvarez described the bottle in the IV bag during testimony last week and in January during a preliminary hearing, leading Chernoff to question whether Fleak had added the detail to match Alvarez’s description. Fleak had photographed the bottle and IV bag together, but with the container placed outside the bag.

Fleak denied any wrongdoing, and denied Chernoff’s contention that she had made “a substantial number of mistakes”. — Sapa-AP