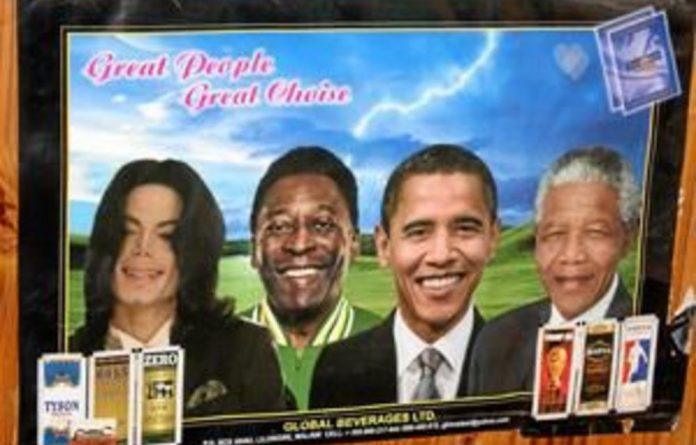 The Nelson Mandela Children’s Fund and the Nelson Mandela Foundation expressed their concern this week, saying they intended to consulting their lawyers about the unauthorised use of Madiba’s image to sell liquor.

“We’re going to confer with the foundation, our sister organisation, on what action to take regarding this misrepresentation and clear abuse of Madiba’s image,” said Oupa Ngwenya, spokesperson for the children’s fund.

Asked whether Madiba, Obama and the others had given permission for their faces to be used, Krishnan Reddy, director of Global Beverages, said the company gave employment to thousands of Africans. “We operate in 18 countries across the continent,” said Reddy. “We’re involved in the brewing of many alcoholic beverages, ranging from whisky and cane spirit to beer.” He added that Global Beverages donated food parcels to charities across the African continent.

“If they are contributing to charitable organisations, we’re certainly not one of the recipients or beneficiaries,” said an upset Ngwenya.

“And clearly alcohol, gambling or tobacco manufacturing companies are excluded from the companies we interact with. They’re not in line with the principles that govern us.”

Told that Nelson Mandela was a teetotaller and that using his face to endorse alcoholic beverages ran counter to his principles, Reddy said he thought the use of these global icons was a clever marketing strategy.

He was quiet for a long time when asked whether the company had sought Mandela’s permission, finally replying that he did not know if such an agreement existed but that his boss in India would probably know.

When the Mail & Guardian requested the identity of his boss, and his or her contact details, Reddy hung up.