CAF: Bafana not yet qualified 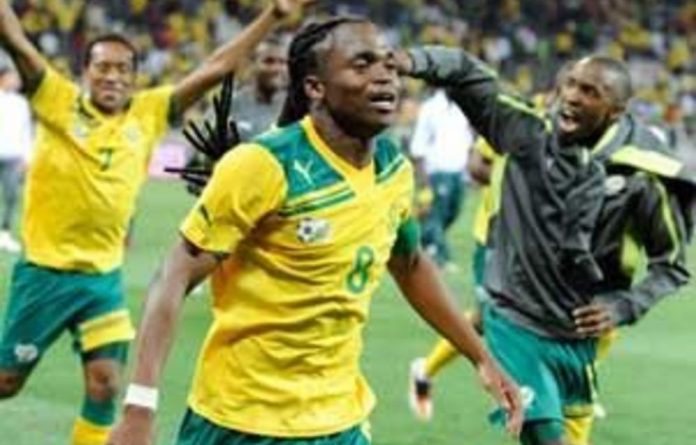 The Confederation of African Football (CAF) said on Saturday that Bafana Bafana’s post-match celebrations were premature.

The Bafana players rejoiced after playing to a goalless draw in their final 2012 Africa Cup of Nations Group G qualifying match against Sierra Leone in Nelspruit.

The host team thought they had qualified for the tournament after Egypt beat Niger 3-0 in Cairo in a simultaneous fixture.

According to CAF, however, their 2-1 loss to Niger in Niamey last month would count ahead of goal difference and Bafana would progress to the qualifying playoffs.

Bafana’s performance in front of a near-capacity crowd was dreadful.

While a number of injuries to experienced players, including captain Steven Pienaar, had hampered the team’s preparation, this was their worst showing since Mosimane took over a year ago.

The South Africans ended the qualifying campaign first in the group standings with nine points and a better goal difference to both Niger and Sierra Leone, who finished with the same number of points.

Bafana were sluggish against the Leone Stars, and lacked cohesion, particularly in the crucial first 30 minutes of the match.

The visitors, on the other hand, looked sharper as their strike pairing of Mohamed and Teteh Bangura probed Bafana’s central defensive duo of Morgan Gould and Siyabonga Sangweni.

Not having an out-and-out left back left a gap on that side of defence, with right-footed Siboniso Gaxa producing a poor showing and getting caught out of position at times.

They had to wait until the 21st minute to make any meaningful attempt at goal, with Sangweni’s non-threatening header going wide, while captain Siphiwe Tshabalala’s cross after a good run a few minutes later found no-one in the box.

Sangweni pushed forward again in the 33rd minute before unleashing a shot that narrowly went over the bar before Tshabalala also made an attempt from the edge of the penalty area that sailed over the post.

Bafana’s top striker, Katlego Mphela, had a chance with a free kick outside the box that was easily saved by Sierra Leone goalkeeper Christian Caulker, and shortly before half-time he fluffed another shot following good play from midfielder Daylon Claasen.

At the start of the second period, Tshabalala found himself in the box with a scoring opportunity.

His attempted curler went wide of goal with Caulker beaten.

The Leone Stars were calculative in their play and their strategy of pumping crosses to their burly forwards while curbing offensive play from Bafana.

Midfielder Rodney Strasser managed to rise above the Bafana defence 10 minutes into the second half, catching them napping from a corner kick, only for the header to go narrowly wide.

The key moment of the match, though, came in the 70th minute when Bafana keeper Itumeleng Khunes made a blinding punch after a long-range effort from winger Sheriff Suma. — Sapa