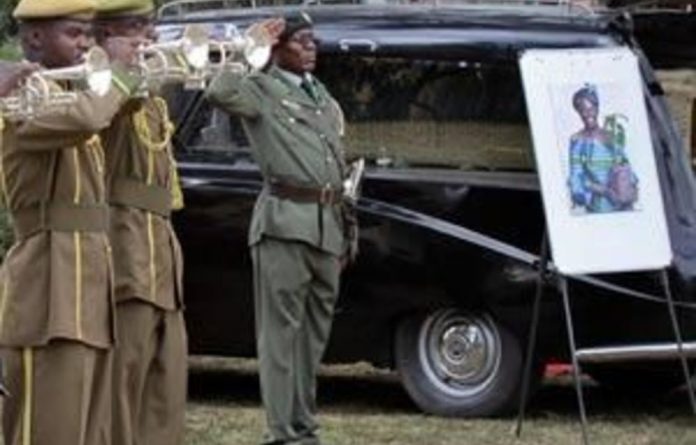 Hundreds of mourners gathered on Saturday for the funeral of Kenyan environmentalist and Nobel laureate Wangari Maathai at a park in central Nairobi that she fought to save from destruction.

The staunch conservationist’s body was driven to the park in a coffin made of hyacinth fibres and bamboo frames because she opposed being buried in a wooden casket requiring the chopping down of trees.

Mourners also lined Nairobi streets to view the cortege of Maathai, who died of ovarian cancer at the age of 71 on September 25, and traffic was halted for the funeral procession and other dignitaries.

Her remains were cremated in accordance with her will.

At the Uhuru Park, Kenyan leaders lauded the work of Maathai, renowned at home for having stood against plans by the authoritarian regime of former president Daniel arap Moi to build a skyscraper in the park.

Maathai in 2004 became the first African woman to be awarded the Nobel Peace Prize for taking “a holistic approach to sustainable development that embraces democracy, human rights and women’s rights in particular”.

Kenya bade farewell to one of its icons a day after two other African women were among the three recipients of this year’s Nobel peace prize, Liberian President Ellen Johnson Sirleaf and fellow countryman Leymah Gbowee.

“Besides being a woman of great courage and tenacity, the late professor Maathai demonstrated, by example, the virtues of selfless service to the nation,” President Mwai Kibaki said.

Key figure in conservation
Her coffin, draped in the Kenyan flag, was driven in a black hearse to the park where her three children and a granddaughter planted a tree.

“The best way to honour her is to carry on the great work she started, especially in the fields of environmental conservation, social justice, human rights and democracy,” Kibaki added.

The first woman in east and central Africa to earn a doctorate, Maathai became a key figure in Kenya since founding the Green Belt Movement in 1977, vigorously campaigning for environmental conservation and women’s’ rights.

She also joined forces with movements that pressed for political freedom and democracy during Moi’s single-party rule.

One of her photos was placed next to the hearse during the funeral, where the national anthem was played in her honour and church bells chimed as well.

Kenyans showered her with tributes.

“I want to tell Wangari that her dream will continue. We will continue with her struggle,” said Koigi Wawamwere, a renowned Kenyan activist once jailed by Moi. “This is what we shall re-dedicate ourselves to.”

Norwegian ambassador to Kenya Per Ludvig Magnus said Maathai’s death was “a loss to the world but her ideals continue to live.”

“Looking back at our country, we can confidently say Wangari’s misfortune was that she lived ahead of her time,” Kenyan Prime Minister Raila Odinga said.

Born into a poor family close to Mount Kenya in central Kenya in 1940, Maathai went to school at a time when education was not a priority for many girls in Kenya.

While she picked up numerous awards for her work, she was repeatedly arrested and brutalised by Kenyan police for campaigning against deforestation. — AFP