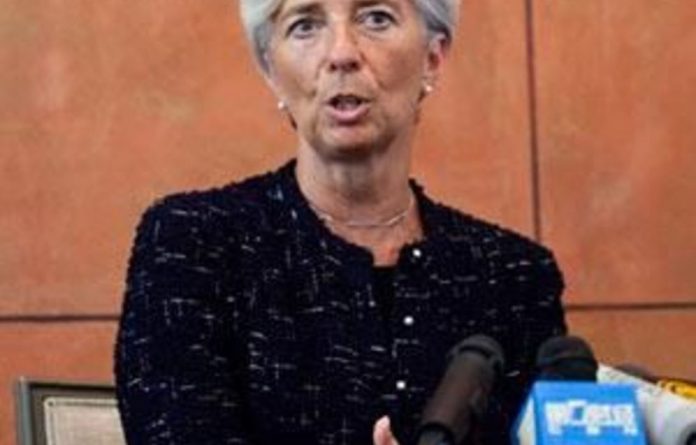 She made no comment either as she went into the Elysee Palace or as she left an hour later.

The talks preceded a trip to Berlin by Sarkozy on Sunday to meet German Chancellor Angela Merkel as eurozone leaders cobble together a plan to recapitalise banks overexposed to risky sovereign debt.

On Friday the European Commission gave member states 10 days to agree a plan to shore up their lenders which Lagarde’s IMF thinks will need between €100-billion and €200-billion to cover potential losses.

French banks in particular are seen as overexposed to Greek, Italian and Spanish debts, and leaders fear a default in a weaker Mediterranean economy could trigger a financial crisis across the continent.

Highlighting the urgency of the task, ratings agency Moody’s downgraded a dozen British banks over concerns government support for lenders could be withdrawn and the Fitch agency downgraded Italy’s and Spain’s credit ratings.

Euro project at risk
The debt crisis, which began in Greece, has snared Ireland and Portugal and now put Italy and Spain in the firing line too — threatening to sink the entire euro project as banks find it hard to raise funding.

The French, German and Italian employers’ federations on Saturday appealed for greater European integration, calling for a new treaty to get over “the current shortcomings of the eurozone”.

“So that the foundations can be laid for a prosperous and politically strong 21st century Europe, we call on the European Union (EU) to start work on a new treaty, which would be a new step towards closer political and economic union,” France’s Medef, Germany’s BDI and Italy’s Confindustria said.

They stressed that sufficient capitalisation for banks were essential to resolve the current crisis and should be treated as such.

Fears of a “credit crunch” have raised the spectre of 2008, when US giant investment bank Lehman Brothers collapsed and could have taken the global financial system with it but for massive government support.

Merkel, whose country is Europe’s strongest economy and effective eurozone paymaster, insisted Friday that under-pressure banks must first turn to investors for funds before appealing for national or European cash.

France, the eurozone’s next biggest player, is reportedly more ready to turn to public funds to shore up its at risk lenders and a state investment fund has already drawn up plans to rescue Franco-Belgian bank Dexia.

No rift
Negotiations between the French and Belgian governments on Dexia stepped up on Saturday as top officials tried to reach agreement on guarantees and the price to be paid for the bank’s various offshoots.

Officials at the finance ministry in Paris insisted there was no rift with Berlin, and said that the eventual bail-out plan would be agreed on a European level after Sarkozy’s meeting with Merkel.

Germany is more cautious on using the fund, originally set up to help Greece directly, but has agreed to expand it. Of the 17 eurozone members, only Malta and Slovakia have yet to approve its expansion.

Malta is expected to give the go-ahead on Monday and Slovakia’s deadlocked coalition will meet on the same day, one day before Tuesday’s unpredictable parliamentary vote that could save or sink the rescue fund.

The European Commission said it would offer a framework in “coming days” for EU nations to recapitalise banks in a coordinated fashion. — AFP