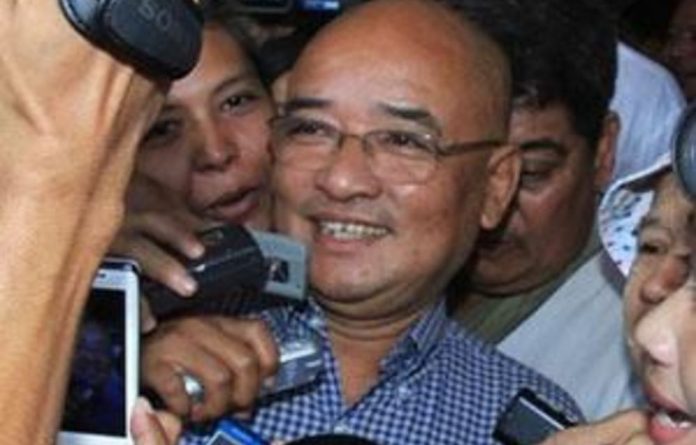 Burma freed an outspoken critic and a major ethnic rebel as it began releasing 6 300 convicts on Wednesday in its latest liberalising move, but kept some political detainees behind bars, dampening hopes for a broader amnesty.

It was not clear how many of the country’s estimated 2 000 political detainees were included in the amnesty — one estimate said only 206 of them were freed. But the released included ailing Shan Army commander Hso Hten and comedian Zarganar, who was imprisoned after criticising the government’s response to Cyclone Nargis in 2008.

“I will be happy and I will thank the government only when all of my friends are freed,” Zarganar told the Associated Press after his release in northernmost Kachin State.

Those held back included student leaders from Burma’s failed 1988 democracy uprising and a blogger serving a 12-year prison sentence.

Western governments, the United Nations and Burma’s opposition have eagerly awaited a broad political amnesty as a gesture of liberalisation by the elected government after decades of harsh military rule. A failure to follow through on those hopes could hamper the country’s efforts to burnish its human rights record and win a lifting of Western economic and political sanctions.

Relatives of convicts held emotional reunions with loved ones outside prisons around the country a day after the country’s new civilian president declared an amnesty for 6 359 inmates — many of them ordinary criminals — on humanitarian grounds, but without disclosing any names.

“The freedom of each individual is invaluable, but I wish that all political prisoners would be released,” said Bruma’s most prominent pro-democracy campaigner, Nobel Peace Prize laureate Aung San Suu Kyi.

Suu Kyi’s National League for Democracy confirmed the release of 155 political detainees, including members of her party, spokesperson Nyan Win said. But other dissidents could have been freed without having contacted anyone yet.

The United States Campaign for Burma, a Washington, DC-based support group for Burma’s democracy movement, said late on Wednesday it had confirmed the release of 206 political prisoners.

President Thein Sein, a retired senior army officer who took office in March, has launched a series of economic reforms and eased limits on freedom of speech by relaxing censorship and unblocking banned websites.

He also has started a dialogue with Suu Kyi, made calls for peace with ethnic minority rebel groups and suspended a controversial China-backed hydropower dam project after a public outcry.

“The pace of change is much faster than I would have expected,” said Monique Skidmore, a Burma expert at the University of Canberra. “Thein Sein must be feeling pretty secure.”

But she added that he knows the release of political prisoners must be comprehensive, “otherwise there will be no end to sanctions”.

Among those released were Hso Hten, the Shan Army commander, but another prominent Shan leader, Hkun Htun Oo, was not freed, according to a government official, who spoke on condition of anonymity because he was not authorised to speak to reporters.

Hso Hten was serving a 106-year prison sentence for high treason following his arrest in 2005.

The activist Zarganar had been serving a 35-year sentence in Myitkyina prison. He was detained after giving interviews to foreign media criticising the former military rulers for being slow to respond to Cyclone Nargis, which left nearly 140 000 people dead or missing. He was convicted of causing public alarm and illegally giving information to the media.

“I am not happy at all, as none of my 14 so-called political prisoner friends from Myitkyina prison are among those freed today,” he told the AP by phone as he waited to board a plane to Yangon.

The sister of famous former student leader Min Ko Naing said she was told he was not on the list of those to be freed.

“We are used to these ups and downs,” Kyi Kyi Nyunt said.

Min Ko Naing has been serving a 65-year sentence at a prison in Shan State in northeastern Burma since 2008 for staging a street protest against a massive fuel price hike. He was arrested in August 2007 along with other well-known former students who were previously jailed after being at the forefront of the failed pro-democracy uprising in 1988.

Activists and relatives said it appeared that most or all of his imprisoned “88 Generation” comrades remained behind bars.

Ashin Gambira, a young charismatic monk who was among the leaders of a September 2007 anti-government uprising, was not on the list of those freed, said Nai Nai, who handles political prisoner affairs for Suu Kyi’s party.

The demonstrations attracted as many as 100 000 people at their height before being brutally suppressed.

The US, which has been seeking ways to re-engage with Burma, has said it wants all political detainees released. State department spokesperson Victoria Nuland said on Tuesday that the US would be keeping a close eye on who is released under the amnesty.

Washington has long isolated Burma with political and economic sanctions because of the former junta’s failure to hand power to a democratically elected government and its poor human rights record.

“There seems to be some opening of the democratic space within Burma,” he told a news conference. “We would like more and more of that.” — Sapa-AP

Motsamai journeys from prison to Parliament

Ethiopia to free opposition leader and hundreds of others