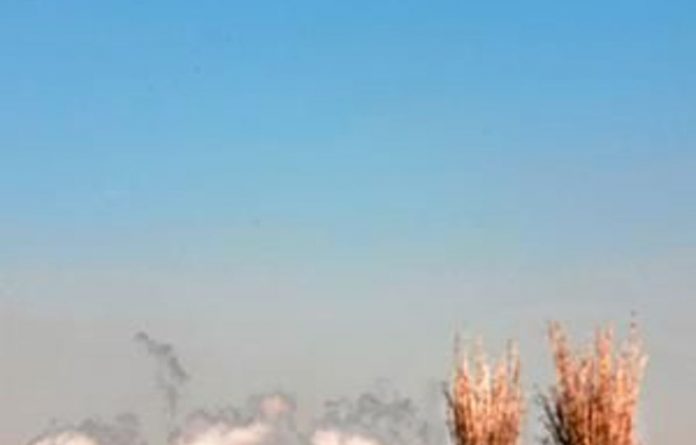 Treasury and business are set for a showdown on the proposed carbon tax that is expected to come into force early next year after Finance Minister Pravin Gordhan delivers his 2012 budget speech.

South Africans are likely to catch a glimpse of the controversial new policy ahead of the climate change conference, COP17, which starts in Durban on November 28.

The carbon policy, released in December last year, imposes a tax on emissions calculated at R75 a tonne of carbon dioxide (CO²), eventually rising to about R200 a tonne. But these numbers are not a given in the draft policy paper, which treasury spokesperson Bulelwa Boqwana confirmed would be released next month.

Apart from the tax acting as an emissions deterrent, it could be a rewarding revenue generator. Deloitte consulting firm calculates that, assuming a tax rate of R165 a tonne of CO² emissions, South Africa could collect about R82.5-billion a year from companies. This revenue, if directed straight into the fiscus, could make a huge dent in the country’s budget deficit, which according to the treasury was about 5% of gross domestic product, or about R140-billion.

Eskom would have to fork out about R37-billion extra a year, based on Deloitte’s calculations, and Sasol R9.9-billion. The treasury said these tariffs “would be both feasible and appropriate to achieve the desired behavioural changes and emissions reduction targets”.

The idea has drawn fire from the country’s biggest emitters, particularly Eskom and Sasol, which have warned that a carbon tax would shave billions off their bottom line and result in big job losses. Eskom is South Africa’s biggest emitter, having pumped 220-million tonnes of CO² into the atmosphere last year. Sasol’s local operations were responsible for 70-million tonnes of CO², so they have a lot to lose from paying a carbon tax.

Critics fear that South Africa is rushing the new policy to display to the world at COP17, but the country is not alone in its actions. Australia will introduce a carbon tax by July next year, starting at A$23 or R180 a tonne and rising 5% a year until 2015.

Internationally, carbon tax is used as a way to provide incentives for businesses to make choices about energy usage. “But in South Africa the integrated resource plan is used to do that already,” said energy analyst Peet du Plooy.

It is understandable that heavy emitters would not be happy with the tax, but Du Plooy said border adjustments on carbon would be implemented by other countries eventually and South Africa’s produce would be taxed in any case.

“We should rather do it ourselves,” he added.

Gordhan said in June this year that the carbon tax policy had to internalise the external costs of climate change.

“The tax will help create incentives to shift to low-carbon, cleaner alternatives such as renewables. The options being explored are a tax on actual emissions and a proxy carbon tax on the fossil fuel inputs used.”

But critics argue that the tax is not ring-fenced and would not necessarily go towards developing a green economy. Energy analyst Mike Rycroft warned that “this will be just another tax”.

This could hurt Eskom, which said it was not in a position to absorb these costs. “It will be a full pass-through to consumers,” said Eskom chief executive Brian Dames earlier this year.

In its response to the treasury’s discussion paper, Gina Downes, Eskom’s chief advisor of environmental economics, said in March: “Although the discussion paper — is well written and theoretically sound, it fails to take into consideration the way in which the electricity industry is currently regulated.”

A carbon tax would place greater pressure on Eskom’s tariff proposals, she said.

“These higher tariff increases do not result in a concomitant emissions reduction — there is a disjunction between tax levels and emissions reduction targets. In any respect, many details remain to be described and assessed, including unintended consequences.”

Downes said a carbon tax would neither promote international financial transfers, which was a condition of South Africa’s pledge in Copenhagen, nor was it consistent with developments in other emerging markets.

Eskom has said that for every R2-billion increase in its cost, there would have to be a 1c per kilowatt hour (kwh)increase in the tariff.

“The plan is already a massive deviation from business as usual and it comes at a price. You have to make sure that you get consistency.”

Eskom has already increased its rates from 31.9c/kWh last year to 40.3c/kWh this year.

“We would much rather like to see a carrot rather than a stick approach.”

Norbert Behrens, Sasol’s group general manager for strategy and planning, said at the March workshop that South Africa had a higher carbon intensity than countries that had implemented a carbon tax. South Africa was also an outlier compared with other commodity producers, he added.

Sasol has offered other alternatives to a carbon tax, and the Energy Intensive User Group of South Africa also warned that an ill-considered carbon tax could lead to job losses.
The group’s members consume about 44% of the country’s electrical energy and also opposed to the tax, calling for a bigger debate on carbon pricing.

Group chairman Mike Rossouw said: “We support a transparent, fair and predictable carbon pricing signal. Carbon tax can be part of that pricing signal, but we need to look at all the complementary policies, not just carbon tax.”

He reiterated that if the tax was enforced, “we will lose lots of jobs”.

The group was engaging formally with the treasury on the tax, which he said was too high at R200 a tonne.

“We are doing the same thing with Eskom. We are offering to assist in drawing up the policies. You need to do a proper economic impact before putting forward such a tax,” Rossouw said. “South Africa should do a detailed analysis of the abatement opportunities and costs, as well as the investments required.”

An industry task team on climate change, representing eight ­mining firms including BHP Billiton, Exxaro, PPC and Anglo American, also wrote to the treasury warning of the economic repercussions of a carbon tax.

Anglo American urged that a tax be “phased in sensibly”, but also warned that it could hamper the company’s business competitiveness in the export market.

ArcelorMittal South Africa viewed the carbon tax proposal as “­unworkable”, saying it had the potential “to seriously impact on our profitability if pushed through — [and] undermine our competitiveness against developing and developed country steel producers, which don’t confront such a tax burden”.

Australia approves Bill amid strong opposition
The Carbon Tax Bill, which was reintroduced by Australian Prime Minister Julia Gillard for a third time last month and passed in the lower house of Parliament on Wednesday, has been called one of the most controversial pieces of legislation in 30 years.

Although it is a historic victory for Gillard, the Bill is still being fiercely contested by the opposition, which has vowed to ditch the tax if conservative leader Tony Abbott of the Liberal Party of Australia wins office in the next election.

The tax will be the government’s premier strategy for cutting emissions by a minimum of 5% by 2020 in Australia, which has a coal-based economy and is one of the world’s biggest per-capita greenhouse gas emitters. Most of the biggest emitters are electricity-generating firms, mining companies and heavy-industry manufacturers.

To compensate households, the government announced it would cut income taxes and boost payments such as pensions and other benefits, as well as offer various lump sum payments. According to the Financial Times, the average household is expected to pay about US$9.90 a week in extra living costs, including US$3.30 on electricity.

But this would be off-set by an estimated US$10.10 in extra benefits and tax breaks, said the newspaper. The Australian scheme would cover about 60% of Australia’s emissions, making it the most broad-based in the world.

The carbon tax was shelved by former prime minister Kevin Rudd before he was ousted last June. The Bill is a huge gamble for the government politically, because early polls show the opposition’s support is growing because of economic uncertainty around the Bill.

The opposition has warned that the carbon tax will lead to job losses and push up prices. But the Bill has also been praised as one of the most progressive in the world in dealing with climate change.

The carbon tax will be introduced on July 1 next year and then be phased out by 2015 into a market-based emissions trading scheme.