Mashatile on the march to 2012 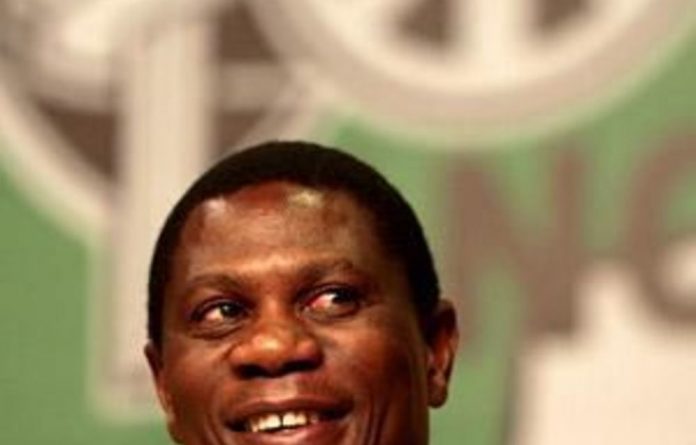 Lobbying has already started for Arts and Culture Minister Paul Mashatile to become ANC national chairperson at the party’s crucial 2012 elective conference in Mangaung in the Free State, after his allies emerged victorious from four regional conferences in Gauteng.

Mashatile’s camp scored victories at regional conferences held in the past weeks in Ekurhuleni, West Rand, Tshwane and Johannesburg.

Ardent loyalists told the Mail & Guardian this week that they had targeted several provinces to garner support for the minister, who is also Gauteng ANC chairperson.

The campaign for support for Mashatile will focus in the next few months on the Eastern Cape, where President Jacob Zuma has also made several trips in the past month, allegedly to campaign for a second term.

Zuma addressed ANC members in Mthatha and Port Elizabeth as part of the party’s Imvuselelo campaign aimed at reaching one million ANC members by 2012.

“The Eastern Cape will be a battleground for 2012. We think Limpopo will agree to support Mashatile to become national chairperson and so will the North West, Northern Cape and Free State provinces. Our challenge is KwaZulu-Natal, which still wants Zuma for a second term,” said a Gauteng ANC regional leader who spoke to the M&G on condition of anonymity.

“You have no choice if you differ with the majority. Paul [Mashatile] might emerge as national chairperson, especially if you observe that provincial chairperson Cassel [Mathale] is going to remain in charge of Limpopo. He is a close ally of Mashatile and will lobby for him.”

All those in favour
The regional leader told the M&G Mathale was one of the current ANC chairpersons in favour of Mashatile becoming ANC national chairperson.

Both Mathale and Mashatile are viewed as supporters of deputy president Kgalema Motlanthe and the ANC head of organising and campaigns, Fikile Mbalula, who are being backed to replace Zuma and ANC secretary-general Gwede Mantashe in their respective positions at the conference next year.

“It’s a significant bloc. That is why you see president Zuma trying his best to curtail the bloc. If it wasn’t significant, he would let the campaign die.

“We are in a difficult position. We have a sitting president who is going to refuse to be contested, while on the ground, the dynamics are different. His only support base is KwaZulu-Natal.”

Asked whether Mashatile would receive the full backing of the provinces, an ANC leader, who spoke to the M&G on condition of anonymity, said: “Never doubt Paul’s support. We have differed with him over the years, but he always emerges. Even national leadership knows that he is in charge. He is loved by the branches. They consider him to be a very humble person. We are looking for somebody who will stabilise the party and unite the provinces and Mashatile fits the bill.”

While critics of Mashatile’s bid to become national chairman claim that he started to campaign too early and that this could be backfire, an ANC Youth League member denied this, saying he was stronger than ever.

“When a campaign starts early, it puts you in an advantage,” said the youth leader, who also spoke to the M&G on condition that he was not named.

“Everyone understands that you are available, especially when you take into consideration that no one is contesting the position nationally.”

Process of nomination and succession
If Mashatile’s campaign is successful, some regions plan to nominate current Gauteng provincial secretary David Makhura as chairperson of the province in the next two years and possibly for the position of Gauteng premier in 2014.

Luthuli House insists that the process of nomination and discussion of succession has not yet started.

Mashatile is informally referred to as “chair of chairs” and is widely credited with coming up with an informal structure of provincial chairpersons who meet regularly to discuss issues of mutual concern and party matters.

Last year, the structure helped to stop the ANC national general council in Durban from degenerating into chaos. ANC Gauteng spokesperson Nkenke Kekana told the M&G that the province was happy about the outcome of its regional conferences, but denied Mashatile had been endorsed as national chairperson.

“Even in the regional conferences, they never discussed that.

There was never any discussion of names. Our focus was on restoring stability to all the regions,” Kekana said.

The provincial executive committee spokesman said the Gauteng leadership was happy in particular with the outcome of the Johannesburg regional conference at which City of Johannesburg mayor Parks Tau was elected regional chairman, because the party leadership overlapped with the city leadership.

The Johannesburg leadership was afflicted by in-fighting last year, in which some members tried to recall executive mayor Amos Masondo a few months before his term was about to end. The province has also instituted disciplinary action against Tshwane renegade ANC leader Mafika Mahlangu and his “executive”.

Mahlangu and his “executive”, Joel Mphahla, Oupa Phetla, Tshepo Rantho, Santos Machika and Tebogo Monaanyane have been suspended “for being the principal organisers and orchestrators of anarchy, ill-discipline and parallel structures in Tshwane”.