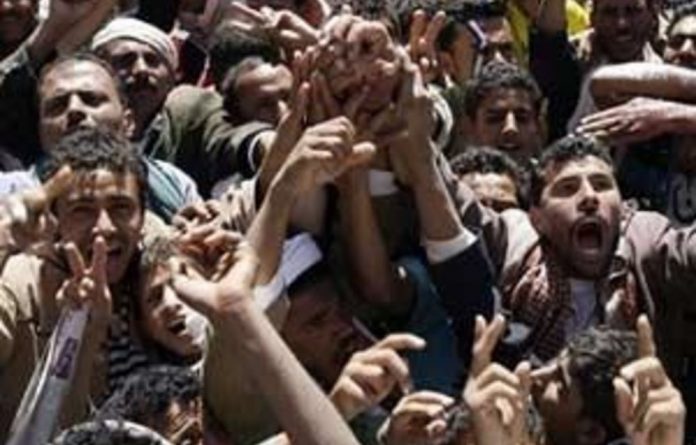 Security forces shot dead at least 12 people protesting against the rule of Yemeni President Ali Abdullah Saleh in the capital Sanaa on Saturday and al-Qaeda insurgents blew up a pipeline, halting the nation’s gas exports.

Yemeni officials said the attack on France’s Total gas pipeline was in retaliation for the killing of the head of the media department of al-Qaeda in the Arabian Peninsula in an air raid on militant outposts in Yemen.

In Sana’a, security forces shot dead at least 12 demonstrators in a fresh outbreak of violence as Yemenis waited for the United Nations Security Council to agree to a resolution expected to urge Saleh to hand over power under a Gulf peace plan.

The death of Ibrahim al-Banna, an Egyptian described by Yemeni officials as high on their wanted list, and 23 other people late on Friday is a fresh blow to the Islamist group regarded by Washington as the most serious threat to the United States, following the killing of Anwar al-Awlaki last month.

But the destruction of the Total pipeline, which transports gas from the central Maarib province to Belhaf port on the Arabian Sea, deals a severe blow to the Yemeni economy, already reeling from months of protests.

The Yemeni Defence Ministry said its air force targeted militant hideouts near the town of Azzan in the southern Shabwa province, an attack which residents said also killed the oldest son and a cousin of US-born cleric Al-Awlaki, long sought by Washington for links to al-Qaeda.

‘Dangerous’ militant
Local residents and officials said they believed the aircraft that launched at least three strikes in the area were foreign, flying at high altitude and smaller than the Soviet-made Yemeni air force planes.

“There were planes flying high. I could hear the sounds of their engines but I could not make them out,” one witness who declined to be identified, told Reuters. “All of a sudden, the area was shaken by successive explosions,” he added.

A Yemeni official described al-Banna as a “dangerous” militant and one of the most wanted people internationally.

Witnesses said militants were seen removing several mutilated bodies as well as an unknown number of injured people from the scene after the raid early on Saturday.

Last month, a US drone killed Al-Awlaki, identified by US intelligence as “chief of external operations” for al-Qaeda’s Yemen branch and a web-savvy propagandist for the Islamist cause, US officials said.

Relatives of Al-Awlaki said the cleric’s son and cousin were due to be buried at the site of the attack.

The Yemeni army last month drove the militants out of Zinjibar, which lies east of a strategic shipping strait through which some three million barrels of oil pass daily.

Gas pipeline
Residents and officials said the 322km pipeline, which links gas fields in Maarib, east of Sanaa, to a $4.5-billion Total-led liquefied natural gas (LNG) plant, was attacked soon after the raids.

Sources at Total told Reuters the pipeline was blown up in two places, stopping the supplies that feed the Belhaf LNG plant. Witnesses said flames were visible from several kilometres away.

The company evacuated nearly half its foreign staff to neighbouring Djibouti and sent some local and French engineers to start repairing the pipeline.

Yemen has the capacity to supply up to 6.7-million tonnes of LNG per year. Last year Yemen LNG, the 16th largest seller of the gas, shipped more than half its supplies to Asia, the rest going to the Americas and Europe.

Sana’a heats up
In Sana’a, heavy violence broke a lull as Yemenis awaited deliberations in the UN Security Council aimed at pressuring Saleh to comply with a Gulf Arab initiative to hand over power to his deputy as part of a plan to end months of protests.

Witnesses and medics said Yemeni security forces opened fire on tens of thousands of anti-government demonstrators trying to march towards state buildings, such as the presidential palace.

They said dozens of people were also wounded and taken to a field hospital in Sixty Street where thousands have camped out for months demanding that Saleh steps down. A Yemeni government soldier also died in the clashes, government sources said.

Witnesses said troops initially used tear gas and water cannon against the demonstrators, who responded by hurling stones at security forces. “Dozens of people were also wounded in the clashes,” one witness said.

The director of the field hospital, Tareq Noman, told Al Jazeera television that his facility had received the bodies of 10 people and that hundreds were wounded. The deputy information minister, Abdu al-Janadi, said the death toll was lower.

They said the fighting was concentrated in the Hasaba neighbourhood of Sana’a, where al-Ahmar lives, and near the airport, which was closed by the fighting.