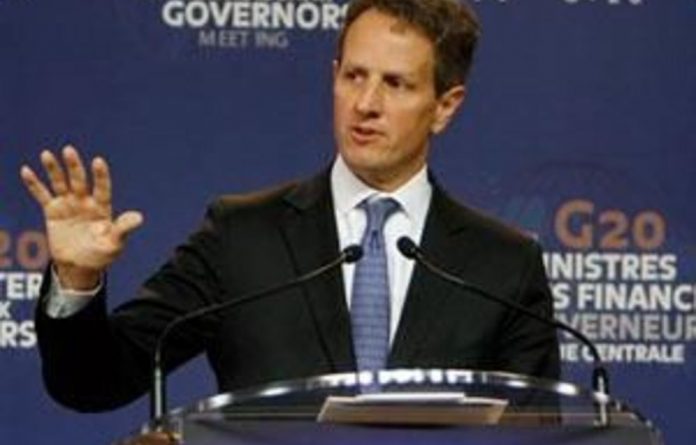 The world’s leading economies pressed Europe on Saturday to act boldly within eight days to resolve the eurozone’s sovereign debt crisis which is weighing on the world economy.

In unusually direct language, finance ministers and central bankers of the Group of 20 major economies said they expected an October 23 European Union (EU) summit to “decisively address the current challenges through a comprehensive plan”.

United States Treasury Secretary Timothy Geithner told reporters he was encouraged that the latest EU moves towards an overall strategy to tackle the two-year-old crisis contained the right elements, notably a recapitalisation of European banks.

“They clearly have more work to do on the strategy and the details but when France and Germany agree on a plan together and decide to act, big things are possible,” Geithner said.

“I am encouraged by the speed and direction in which they are moving.”

Non-euro countries highlighted the damage the European crisis was already doing to their economies and underlined the urgent need for action by the 17-nation single currency area.

“Europe needs to get its act together because unless the crisis is put to an end it will start to affect emerging economies which have enjoyed strong growth,” Japanese Finance Minister Jun Azumi said.

Risk of recession
His Canadian counterpart, Jim Flaherty, said the risk of a global recession would be dramatically higher if next Sunday’s European summit failed to deliver.

British Finance Minister George Osborne told reporters his continental eurozone colleagues “will have left Paris under no misunderstanding that there is a huge amount of pressure on them to deliver a solution to the crisis”.

The communiqué urged the eurozone “to maximize the impact of the EFSF [bailout fund] in order to address contagion”. EU officials said the most likely option was to use the €440-billion fund to offer partial loss insurance to buyers of stressed member states’ bonds in a bid to stabilise the market.

Efforts by some countries to increase the IMF’s war chest to fight the crisis ran into resistance from the United States and others on Friday, burying the idea for now and putting the onus firmly back on Europe.

Geither said the IMF already had very substantial financial firepower and Washington would support committing more of the existing resources to supplement a well-designed European strategy with more eurozone funding.

As the G20 finance ministers and central bankers met in Paris, anti-capitalist protesters rallied around the world, shouting their rage against bankers and politicians accused of ruining economies and condemning millions to hardship through greed and bad government.

Many of the protests, galvanised by the Occupy Wall Street movement, were small and peaceful but violence flared in Rome, where masked rioters set fire to cars and smashed shop and bank windows as tens of thousands staged a peaceful march.

Resistance from banks
Germany and France are trying to put flesh on the bones of a crisis resolution plan in time for the EU summit.

It will involve plans to recapitalise banks, make Greek’s debt mountain more sustainable and ramp up the firepower of the bloc’s rescue fund.

For once in the long-running crisis, the timetable is ambitious. But analysts see risks that forcing banks, the main source of business investment in Europe, to raise more capital could doom the region’s faltering growth and that the reduction in Greek debt may be too small to avoid a default.

There were growing signs that Athens’ creditor banks will fight any attempt to make them shoulder a bigger burden in restructuring Greece’s debts. The lead negotiator of the banking lobby representing private bondholders said there were no grounds to impose bigger “voluntary” losses on their debt than the 21% agreed in July, which looks insufficient.

“We do not see that a compelling case has been made to reopen the [July] deal. A deal is a deal,” Charles Dallara, managing director of the Institute of International Finance (IIF) told the Financial Times.

The G20 statement pledged to ensure banks are adequately capitalised and have sufficient access to funding and said central banks would continue to provide liquidity to banks as required.

Fears of a Greek default have undermined confidence on volatile markets since late July, with global stocks falling 17% from their 2011 high in May.

But they have picked up since the leaders of France and Germany set an end-October deadline for comprehensive action.

Let the yuan rise
While the European crisis was the main focus, Washington and Beijing continued to spar over China’s currency.

Chinese Premier Wen Jiabao rebuffed US pressure for a more rapid appreciation, assuring exporters at the Canton Fair in Guangzhou on Saturday that China’s exchange rate would remain “basically stable” to protect them.

Chinese negotiators prevented the G20 from going beyond wording issued at their last meeting in Washington on the need for emerging market nations’ currencies to be more flexible.

French President Nicolas Sarkozy wants progress on bigger goals such as setting parameters to measure global imbalances and reining in speculative capital flows at a November 3-4 summit in Cannes where France passes the G20 baton to Mexico. — Reuters