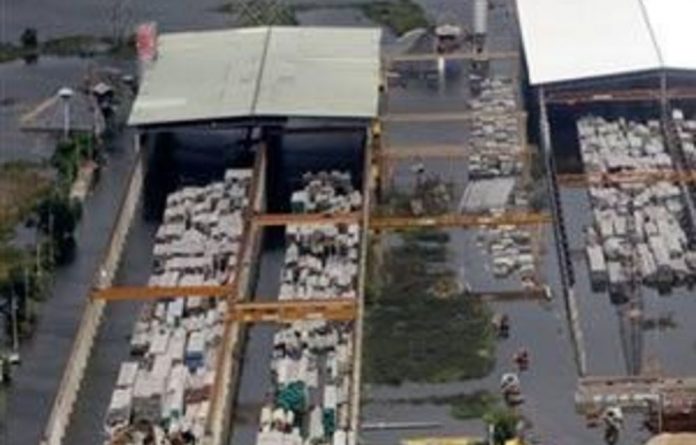 Floods in Thailand engulfed another industrial estate on Sunday but the capital, Bangkok, appears for now to have escaped the devastation seen elsewhere in the country despite heavy monsoon rain and water streaming towards it from the north.

Flooding has killed 297 people since late July and caused $3-billion in damage. A third of the country is under water but officials are confident low-lying Bangkok will be spared after the strengthening of its system of defensive dikes and canals.

“We’re dredging canals in both western and eastern zones which should be completed in no more than a week. The irrigation department has provided an update on the water situation which has reassured us,” Prime Minister Yingluck Shinawatra told reporters.

Ayutthaya, Pathum Thani and Nakhon Sawan provinces north of Bangkok have been devastated. Floods have swallowed up homes and forced a series of huge industrial parks to close, including the Bang Pa-In estate in Ayutthaya on Saturday.

Another estate, Factory Land in Ayutthaya, which has 93 factories employing 8 500 employees, flooded in the early hours of Sunday morning.

Most of the factories make electronic components and car parts so this will add to the problems of the international firms that use Thailand as a regional production hub.

“The water broke in at around midnight. Operators there were aware of it and evacuated people from the estate … Up to now, five industrial estates have been flooded,” said Prayoon Tingthong, in charge of industrial affairs for the province.

Japanese car maker Honda Motor Co. Ltd has shut its Ayutthaya plant which accounts for 4.7% of its global output and said on Friday it would stay closed until October 21.

The authorities are worried about another industrial park, Nava Nakorn in Pathum Thani province north of Bangkok, which is standing in the way of the flow of water towards the capital.

Thai media said soldiers and workers from the estate, Thailand’s oldest with more than 200 factories, were working around the clock to strengthen its walls and divert water.

However, on Sunday the Bangkok Post website quoted an irrigation official as saying a crucial sluice-gate had been repaired so the estate was now safe.

High river levels
The north, north east and centre of Thailand have been worst hit by the flooding and Bangkok — much of it only two metres above sea level — is at risk as water overflows from reservoirs in the north, swelling the Chao Phraya River that winds through the densely populated city.

That danger was compounded at the weekend by high estuary tides that hamper the flow of water into the sea.

The river was reported to be at a record high level of 2.15m at one point on Saturday but the embankment wall running along it in inner Bangkok is at least 2.5m high and has been raised along vulnerable stretches.

“The government’s operations are proceeding well … As for the current water level, it is satisfactory and it’s quite certain that water will not flood Bangkok,” said Police General Pongsapat Pongcharoen, a spokesperson at a government crisis centre set up at the city’s old Don Muang Airport.

Even so, Bangkokians have stocked up on bottled water, instant noodles, rice and canned goods. Many have parked their cars in elevated garages and piled sandbags in front of shop-houses and homes.

The economy is bound to suffer from the flooding.

Both the central bank and government have put the cost at about $3.2-billion already, more than 1% of gross domestic product (GDP).

The Finance Ministry has cut its GDP growth forecast for this year to 3.7% from 4%.

The central bank said on Friday that 104 bank branches had closed because of flooding, mainly in the central region. Deputy Prime Minister Kittirat Na Ranong has called bankers to a meeting at the Don Muang crisis centre on Monday.

A committee of government, union and employer representatives is due to decide on Monday on a government plan for a big increase in the minimum wage but Thai media said employers appealed on Sunday for the decision to be put off for six months because of the damage caused by the floods. — Reuters