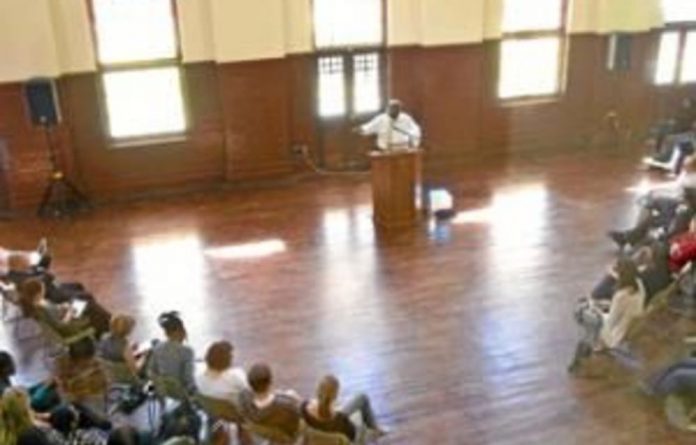 At a campus meeting last weekend, about 80 University of the Free State (UFS) students waited their turn to talk about recent overseas trips that many said they had found life-changing.

As the second cohort of students selected for the university’s new Leadership for Change programme, they had returned home a week before. Now they were at a debriefing with university staff after two weeks in the United States, for some, and Europe, for others.

Many said they were “changed” individuals following their trips abroad — the first stage in the leadership programme introduced last year as one of several responses to the notorious Reitz residence video in 2008 (see sidebar).

But some students were struggling at Saturday’s debriefing, and not only because of jet lag. In conversations with them, it became clear that some felt less “changed” than others.

Signs of stress
Having flown with the first group, I then spent 10 days with some of them in New York. Signs of stress were frequent — as they were in other groups, I was told by students in several US sites. “This is not working” was one tearful confession.

Could it be, I wondered, that the programme was over-regulated? That the pressure of being the “cream of their year”, and the explicit aim that they should become South Africa’s next generation of leaders, was too great a weight to impose on some?

Some students clearly felt intimidated; some thought the programme’s regimen discouraged honest self-expression. But the same students also expressed their strong belief in the programme’s opportunities for change — and they wanted to be a part of that change as desperately as anyone else did.

“Do not come back the same,” ­university vice-chancellor Jonathan Jansen said at a send-off for the students on the eve of their departure. “We would have wasted a whole lot of money if you leave with prejudice and come back with prejudice. Come back as a different set of people.” (“Jansen: ‘Come back changed individuals’?”, Mail & Guardian, September 23).

Some students at the debriefing spoke about a nightclub drag show they had visited in the US. Others went to a church where lesbian and gay people are accepted. Other students remarked on the high levels of interactivity they observed in American university lectures — a contrast with the “one-way thing” they are more used to between South African lecturers and students.

For Mosa Leteane: “We are the future leaders of this country and the sooner we learn to get along and find common ground, the easier it will be to face the challenges in our country.”

Many spoke confidently of being “agents of change” and of their motivation to change their university and their nation. They quoted Mandela, Roosevelt and Jesus, and expressed their confident commitment to ­creating a campus free of prejudice on the basis of skin colour, religion or sexual orientation. “This is not the end but rather the beginning of a never-ending movement as we take up our positions as the pioneers of change,” said Marnette Brewis.

But behind the clapping and cheering, high-fiving and hugging that accompanied the inspired proclamations of “visions for change” on that Saturday, I knew some students were quietly hoping they would not be singled out to speak. They were wondering why they did not feel the same as the others, and wishing they did.

Nervous confessions had filtered through to me within days of our arrival in New York City, when students who asked to remain anonymous shared their fear that they might not be “what the university wanted me to be”.

Unable to speak honestly
They said they felt unable to speak honestly about their own experiences of racism and diversity during the formal programme sessions planned for them because Free State university authorities might think this “too offensive”. They spoke about “what felt like warnings” staff had given them before they left about the appropriate ways for students to express themselves while abroad.

A student explained: “At a pre-departure briefing I remember a student stood up and asked a question but according to [a university] staff member it wasn’t a good enough question because it didn’t contribute to the conversation enough.

“From that point on I felt I couldn’t ask questions or even give my opinion.”

But even silence seemed unwise when they were abroad. Some students felt that if they did not ask enough questions in the formal sessions, they would be singled out and condemned for not participating enough.

During a formal session at New York University, one student whispered to me: “This guy has been speaking for an hour and I don’t even know what he’s talking about. What question must I ask now?”

Another said: “We feel we must speak in the way they [the American and UFS staff] speak. I can’t say and ask what I want because it might sound stupid.”

For some, the free, unregulated time they spent with their peers and informal visits, such as one to a poor school, were more meaningful than the formal sessions. They spoke of lessons learnt from sharing bedrooms with someone of a different race, of personal experiences exchanged during free times, of needing each other when getting lost together in a foreign city.

But one student’s assessment was this: “If they [the university] ask me if I grew while I was overseas, I will tell them I didn’t. It feels like the UFS only sees me as a good person, an achiever, a good leader if I conform to what they want.

“What if I want to bring about change just by being an example to my friends and family, and not by starting an organisation? Is that OK?”
“I am not a rebel,” she said. “I am not trying to be difficult or cause trouble. I’m just trying to be honest so maybe the UFS can make changes to the programme for the better.”

Victoria John accompanied the University of the Free State students to the United States as a guest of the university.

A response to Reitz racism
The University of the Free State Leadership for Change programme was one of several measures implemented in the wake of a video that emerged in 2008 showing four white male students in the Reitz residence performing a mock initiation of five black workers.

“How young white students, born after apartheid, could carry such bitterness against integration that they would humiliate five university workers” is the crux articulated in the university document explaining the rationale of Leadership for Change.

“In the case of the University of the Free State one strong possibility is the isolation of young white (and black) students coming from mainly rural and small city areas, from interracial and multicultural experiences not organised on the basis of racial hierarchies and master-servant scripts so prevalent, for example, in farming communities,” the document says.

“One intervention that would add to a whole series of other student engagements is a study abroad programme, of short duration, for black and white students where they can observe first-hand models of integration across lines of culture, colour and language, becoming leaders for change.”

In the first stage of this year’s programme, 150 first-year students from all the university’s campuses were selected to visit universities in the United States, Europe and Japan. They attended “learning events in collaboration with the hosting institution, including social, cultural and academic and leadership training events”, it says.

The programme aims to expose the “cream” of the university’s first-year class to “enable students to end racial stereotyping, fears and concerns through guided exposure to cross-cultural environments”, it says.

The second stage kicks in next year when students will mentor newly arrived first-year students, develop leadership programmes for them and run volunteer programmes on ­campus.