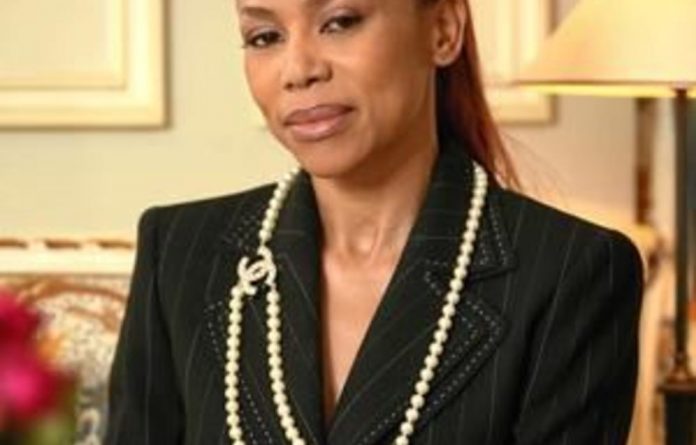 At its heart, the annual Africa Fashion Week (AFW) is about designers and clothes, but the woman at its business heart is Precious Moloi Motsepe.

Moloi Motsepe’s company, Africa Fashion International (AFI), runs AFW and other fashion-industry events throughout the year.
When one meets Moloi Motsepe at AFW or other events, she often wears local fashion designers’ clothes.

Moloi Motsepe, for those who don’t know, is married to one of South Africa’s wealthiest businessmen. Her husband is mining boss Patrice ­Motsepe. Combine his mineral wealth with her fashion-industry clout and you’ve got one of Africa’s glamorous power couples.

This former medical doctor who has one of the softest smiles around, now runs a successful fashion empire.

Moloi Motsepe says it’s her days as a doctor that have helped her join the fashion dots and make bling with a conscience.

“In my work as a doctor I saw firsthand the effect of a lack of economic opportunities on families, particularly on women.

“When there is no consistent income, people tend to spend more on immediate needs rather than on long-term investments like education, preventative health or assets that will help their families break the poverty cycle,” she says.

“In our country the majority of the unemployed are women and young people. They are also the biggest consumers of fashion and clothing. It makes sense to invest in them to create better job prospects, promote entrepreneurship and an active involvement in their general ­wellbeing.”

Apart from creating a platform for fashion designers to show their work, AFI has initiated fashion-related projects for the poor.

“We are involved in a global project with a goal of reciprocal empowerment. We are engaged in partnership with an overseas company.

“In this instance they will design robes for breast-cancer patients around the globe. This project, which AFI is championing with a group of powerful women in the United States and Europe, is a great example of the catalytic role fashion, culture and design can play in promoting peace, empowering women and advancing social enterprise. This really keeps me loving what I do.”

Big business
Philanthropy aside, Moloi Motsepe is focused on the bottom line.

She wants to ensure that her AFI events “promote the best of African fashion creativity on the world stage, changing perceptions of the ­continent”.

“I started a fashion business that would help drive development in South Africa. AFI promotes development through a company that contributes towards job creation by promoting the best of our creative industry on a global platform, developing young designers and promoting entrepreneurship in the creative industry,” she says.

“AFI must aim to become the gateway for African fashion to the rest of the world. We do this through showcases like Fashion Week, trade expos and the promotion of new and existing design talent in South Africa and on the continent.
“It is a huge duty.”

Moloi Motsepe speaks of an Africa that is “becoming the next big business frontier with potential”.

“Most fashion designers do not have the ability or the funds to expose their brands to prospective markets on the continent.

“Through AFI, designers are exposed throughout Africa and the world through our media partnerships and affiliate partners.

“Designers are literally put on the map by showcasing on the AFI platform,” says Moloi Motsepe.

Last year’s winner of the emerging designer award, Bunmi Koko, has become an established name in London and his designs have been worn by Michelle Obama.

This year Koko is returning as a designer and will talk about his success at AFI’s business seminars.
“There is a greater interest in fashion designers from our continent. They are becoming easily recognised brand names. Designers that have shown with AFI have gone on to receive numerous awards. Many of our designers have also received interest from major retailers. As designers succeed, there is more local consumer interest in their clothes.”

Attention to detail
In the tenacious business speak of Moloi Motsepe I am curious to know whether it’s all worth it in that bottom-line kind of way.

We just need to pay serious attention to detail and make unique products at a price that people will want to pay.”