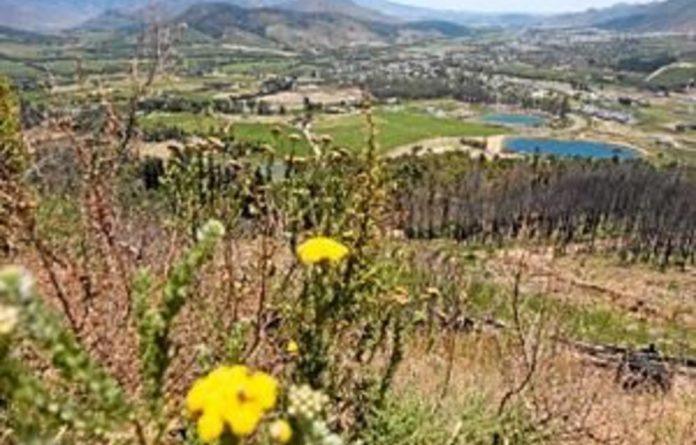 This was in response to an offer made by Jenny Hobbs, the director of the Franschhoek Literary Festival, who wanted to build a library for the poor community in this picturesque valley.

The festival was inaugurated in 2007, aimed at making books more accessible and to promote a reading culture in this Western Cape community.

The long-term goal was to contribute towards the building of a new library. It is reported that the festival has, in the space of five years, generated revenue of about R1-million, which the organisers intend to use to provide support for community and school libraries.

The response of said community member is like a drowning man who looks at the colour of the hand that reaches him instead of just grabbing it and allowing himself to be pulled out of the water.

Hobbs was understandably angry, but the people of this community must have been angrier.

A simplistic view of the response would suggest that the people of Groendal are biting the proverbial hand that feeds them. However, to discover the reality of the situation, it is logical to ask why a community would be so hostile to something that clearly contributes towards its own ­development.

Perhaps the answer to this question lies in my own reaction after I received an invitation to participate in the 2012 instalment of the ­Franschhoek Literary Festival.

A circus
I declined the invitation on the grounds that the festival’s racial scales were unevenly balanced.

I was there in 2008 and, other than the few participating black authors and journalists, there were almost no black people in the audience. I explained to Hobbs that what I found most problematic was that the festival’s location systematically isolated the black community. I decreed that unless this was addressed, unless they made a concerted effort to reach out to black communities, I would not attend the festival and allow myself to be paraded in front of an entirely white audience.

Without casting aspersions on the Franschhoek Festival and its participants, it is my conviction that by accepting the invitation I would be agreeing to participate in a circus performed exclusively for the amusement of the rich.

The invitation came just more than a week after I embarked on a pilgrimage to Franschhoek.

My observation is that Franschhoek was a small community comprised of, in the main, rich white people serviced by a working-class black community that is drawn from mainly farm labourers in the surrounding wine estates. The area is too far from the townships and is not easy to access using public transport.

Worlds apart
What is happening in Franschhoek is symptomatic of the entire South African literary landscape.

In the space of two weeks, I attended two local festivals that are worlds apart in their outlook.

One was Open Book Cape Town, which made me feel like I was somewhere in Europe, the other was Macufe Wordfest in Bloemfontein, which seemed more like a tribal gathering. The major difference in the organisation of these two festivals is that the former is privately funded whereas the latter is state-funded. There is a sense that initiatives that are supported by the state are perceived to serve exclusively black communities and those that are privately funded are for whites.

Although it is important to promote the culture of reading in our society, there is a danger of doing so in a divisive manner.

It is incumbent upon all of us to ensure that our initiatives do not perpetuate racial or any other kind of segregation. In the words of Oliver Tambo: “It is our responsibility to break down barriers of division and create a country where there will be neither whites nor blacks, just South Africans, free and united in diversity.”

The arts, more specifically literature, are considered to be the glue that holds a nation together. It is inconceivable that in South Africa today literature is purposely employed as a barrier to separate one group from another.

No common vision
Perhaps the late PW Botha’s assertion that South Africa is a zebra is a metaphor that best describes our society today. Whether you hit the white or the black stripes of a zebra, the animal is going to get hurt.

The Franschhoek Literary Festival was obviously conceived with noble intentions, but it is important to understand the needs, desires and aspirations of the people that you hope to serve. It is apparent that there was no common vision between the organisers of the festival and the community. The meeting with the Groendal community took place about five years after the inception of the festival, yet from the outset, the festival was purported to be an initiative that would contribute to the very same community.

What is the cause of this cynicism at such an advanced stage?

A people who have experienced centuries of colonialism and decades of oppression and racial segregation have a right to scrutinise the heart, the mind and the face behind the hand that offers help.

Never take poor people for granted, for their dignity is the only thing they possess and they guard it with all their might.

There is a sense that if you are trying to find principled individuals, do not look among the rich, because they can compromise principle for the sake of accumulating wealth.

You are safer among the poor, for they remain so because they refuse to acquire wealth through means that undermine human dignity.

Perhaps the lesson to all potential donors is that when you give to the poor, do so with humility and in a manner that respects them as human beings. Otherwise, they will reject you and your money in the same way as the people of Groendal rejected the Franschhoek Festival.

Africans deserve to hear their stories