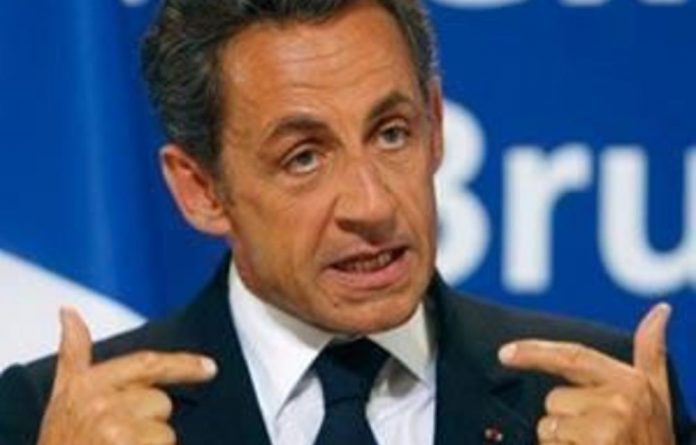 European Union leaders will hold talks on Sunday to try to hammer out a comprehensive plan for tackling the eurozone debt crisis, but a breakthrough is not expected until another summit on Wednesday.

“We have to take far-reaching decisions. These have to be prepared properly, I believe that the finance ministers made progress, so that we can achieve our ambitious targets by Wednesday,” German Chancellor Angela Merkel told reporters.

“The breakthrough … will be on Wednesday,” Merkel said before meeting French President Nicolas Sarkozy and other leaders in a castle outside Brussels on Saturday.

Sarkozy, who earlier in the week sharply disagreed with Merkel over strategy, also said he hoped for a breakthrough in the middle of the week.

“Between now and Wednesday a solution must be found, a structural solution, an ambitious solution, a definitive solution,” Sarkozy said. “There’s no other choice.”

Asked whether he was confident of a deal, he replied: “Yes, otherwise I wouldn’t be here.”

Spain and Italy at risk
To end the debt crisis that first hit Greece, eurozone countries want to tackle several issues in one go and prevent contagion spreading to Spain and Italy, whose public finances are under market scrutiny and whose borrowing costs have risen sharply.

Markets are concerned that Greek debt, forecast to reach 160% of GDP this year, will have to be restructured, but investors do not know what kind of damage they will have to take on their Greek portfolios.

The size of the losses private bond holders would have to suffer is the first key issue that will be discussed on Sunday, but will have to wait until Wednesday for resolution.

This is much more than a 21% net present value loss agreed with investors on July 21. Eurozone officials now argue the recession in Greece is much deeper than expected, the country is behind on privatisation and fiscal targets and market conditions have deteriorated in the past three months.

Bailout fund
A revision of the Greek deal from July could further depress market sentiment towards eurozone investments in general, and especially towards countries with high debt and slow growth like Italy.

To have enough money to support Italy and Spain, if needed, the eurozone wants to boost the firepower of its bailout fund, the €440bn European Financial Stability Facility.

But public opinion in many countries is already strongly against more bailouts, and further commitments to the EFSF could drag down some countries’ credit ratings, worsening the crisis.

How to raise the potential of the fund without new cash is a second key contentious point to be discussed on Sunday, but not expected to be resolved until Wednesday.

France and several other countries would like the bailout fund to be turned into a bank so that it can get access to limitless financing from the European Central Bank. But Germany and the ECB itself are adamantly against it.

The most likely solution now seems to be that the EFSF would guarantee a percentage of new borrowing of Spain and Italy in a bid to improve market sentiment towards those countries.

Such a solution might help ring-fence Greece, Ireland and Portugal — the three countries already cut off from the market and using eurozone emergency loans.

Unless they get more capital to cover potential losses on these bonds, other banks will be reluctant to lend to them on the interbank market, triggering a liquidity crunch, now prevented only by stepped-up ECB liquidity provisions.

The European Banking Authority told European Union finance ministers on Saturday that if all such bank assets were valued at market prices, EU banks would need €100 – 110bn of new capital to have a 9% core tier 1 capital ratio, an EU source familiar with the discussions said.

After their meeting on Saturday, the ministers agreed to give banks until June 2012 to achieve this capital ratio, first using their own funds or from private investors, and if that fails, by using public money from governments or the EFSF.

Bank recapitalisation will be discussed by EU leaders on Sunday, but the EU source said it was unlikely an overall sum for recapitalisation of EU banks would be explicitly mentioned. — Reuters