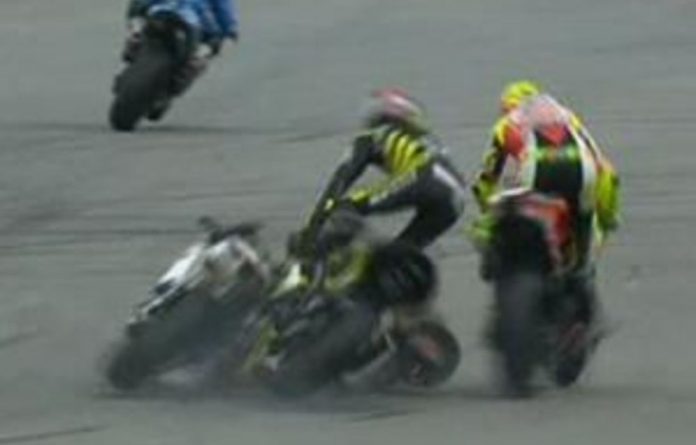 Celebrated Italian rider Marco Simoncelli died on Sunday after a horror crash that saw the Malaysian MotoGP at Sepang cancelled, in the latest tragedy to hit motor sports.

The smash occurred just minutes after the race began when the mop-haired 24-year-old Honda rider’s bike veered across the track and directly into the path of riders Colin Edwards and Simoncelli’s compatriot Valentino Rossi.

Simoncelli, who ironically enjoyed his finest hour at Sepang when he finished third to clinch the 2008 season’s 250cc title, had his helmet knocked off in the sickening collision, which happened on turn 11.

“Despite their [doctors’] efforts, Marco sadly succumbed to his injuries at 4:56pm,” MotoGP said in a sombre statement.

“Everybody involved in MotoGP extends its deepest condolences to Marco’s family, friends and team at this tragic loss.”

The race at the Sepang circuit was immediately red-flagged and organisers later announced it had been cancelled.

Edwards also fell and suffered a separated shoulder, a race doctor said, while Rossi was able to return to the pits.

The stunned other riders were not available for comment after the race.

“Marco is a wonderful person. He is friendly with everybody. He loved this sport,” Gureschi said.

Tricky circuit
Sepang is a notoriously tricky circuit due to Malaysia’s heat, humidity and frequent rain but conditions on Sunday, although hot, were fine.

Spain’s Dani Pedrosa had seized pole position a day before despite taking a tumble, as did Rossi.

Before the race, Sepang officials had promised special attention on safety following the previous weekend.

“It is a sad back-to-back weekend for motorsports,” Sepang Circuit chairman Mokhzani Mahathir told reporters after Simoncelli’s death was announced.

“We try our best to avoid incidents and prepare for the worst. You see, 99% of the time, riders falling and walking away. Only 1% do not.”

The last fatal crash in the world motorcycling championship was last year when Japan’s Shoya Tomizawa was killed.

Although there is a final race in Spain still to come, Australia’s Casey Stoner has already secured the 2011 championship with his win last weekend in a highly eventful Australian Grand Prix.

Stoner won at Phillip Island by just two seconds over Simoncelli, whose second-place finish was the Italian’s best yet in MotoGP.

“You can never guarantee a 100 percent safe race,” Mokhzani said.

Danger
“You expose yourself to danger when you race. As professionals, they know MotoGP is dangerous. Believe it or not, that is what they live for. Our condolences to Marco. He will be missed dearly.”

The flamboyant and well-liked Simoncelli’s death sparked grief in Italy, where officials announced sports events in the country would observe a minute’s silence.

Italian football giants Inter and AC Milan were among the first sports clubs to offer their commiserations.

“AC Milan offers a hug to the family of Marco, a huge rossonero fan, and we want to offer the most sincere and heartfelt condolences in this sad moment,” the club said on its website.

An Inter Milan statement said the club “shares in the pain” of the entire sports world over the tragedy.” — Sapa

Thousands turn out for Simoncelli funeral