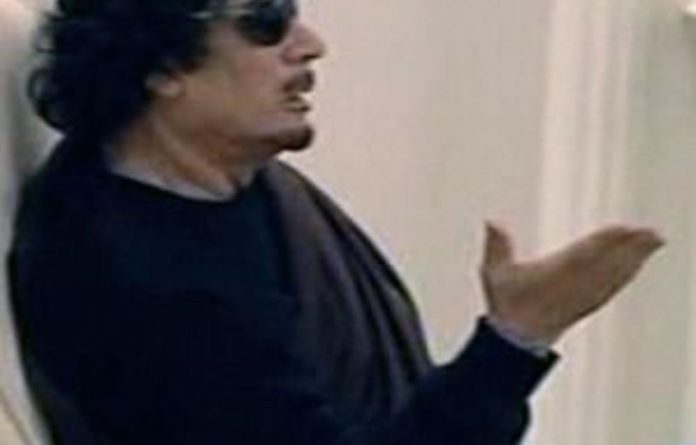 Libya’s interim rulers have declared the country liberated after an eight-month civil war, launching the oil-rich nation on what is meant to be a two-year transition to democracy. But they laid out plans with an Islamist tone that could rattle their Western backers.

The joyful Sunday ceremony formally marking the end of Muammar Gaddafi’s 42-year tyranny was also clouded by mounting pressure from the leaders of the Nato campaign that helped secure victory to investigate whether Gaddafi, dragged wounded but alive out of a drainage ditch last week, was then executed by his captors.

The circumstances of Gaddafi’s death remain unclear. In separate accounts late on Sunday, two Libyan fighters said Gaddafi was hurt after being captured, but was able to stand. One said that when he and others placed Gaddafi in an ambulance, the former Libyan leader had not yet suffered what Libya’s chief pathologist said was a fatal gunshot to the head.

Critics said the gruesome spectacle of his blood-streaked body laid out as a trophy for a third day of public viewing in a commercial freezer tests the new leadership’s commitment to the rule of law.

Britain’s defence secretary Philip Hammond said the Libyan revolutionaries’ image had been “a little bit stained” by Gaddafi’s violent death. Both he and US Secretary of State Hillary Rodham Clinton said a full investigation is necessary.

Gaddafi’s capture and the fall of his hometown of Sirte, the last loyalist stronghold, set the stage for the long-awaited declaration of liberation, delivered by the head of the National Transitional Council (NTC), Mustafa Abdul-Jalil.

He did not mention the circumstances surrounding Gaddafi’s death – mobile phone videos showed the wounded leader being taunted and beaten by a mob after his capture. But he urged his people to avoid hatred.

“You should only embrace honesty, patience, and mercy,” Abdul-Jalil told a flag-waving crowd of several thousand at the declaration ceremony in the eastern city of Benghazi, the birthplace of the uprising against Gaddafi.

‘Somewhere better than here’
Abdul-Jalil laid out a vision for a new Libya with an Islamist tint, saying Islamic Sharia law would be the “basic source” of legislation, and that existing laws that contradict the teachings of Islam would be nullified.

He outlined several changes to align with Islamic law, including putting caps on interest for bank loans and lifting restrictions on the number of wives Libyan men can take. The Muslim holy book, the Quran, allows men up to four wives.

Abdul-Jalil thanked those who fought and fell in the war, saying they “are somewhere better than here, with God”. Displaying his own piety, he then stepped aside from the podium and knelt to offer a prayer of thanks.

Using Sharia as the main source of legislation is stipulated in the Constitution of neighbouring Egypt. Still, Egyptian laws remain largely secular as Sharia does not cover all aspects of modern life.

Libya’s revolt erupted in February as part of anti-government protests spreading across the Middle East. Islamist groups stand to gain ground in neighboring Tunisia and Egypt, which shook off their dictators several months ago. Tunisia has taken the biggest steps so far on the path to democracy, voting Sunday for a new assembly, while Egypt’s parliamentary election is set for next month.

Libya’s struggle has been the bloodiest so far in the region. Mass protests turned into a civil war that killed thousands and paralyzed the country. Gaddafi loyalists held out for two more months after the fall of the capital of Tripoli in late August. Gaddafi’s hometown of Sirte fell last week, but Gaddafi’s son and one-time heir apparent, Seif al-Islam, apparently escaped with some of his supporters.

The anti-Gaddafi forces enjoyed strong Western political and military support during their revolt, especially from the US, Britain and France, and Nato airstrikes were key to their victory.

Very close competition
Abdul-Jalil paid tribute to the Gulf Cooperation Council, a six-nation alliance led by Saudi Arabia, the Arab League and the European Union. Nato performed its task with “efficiency and professionalism”, he said.

“After four decades of brutal dictatorship and eight months of deadly conflict, the Libyan people can now celebrate their freedom and the beginning of a new era of promise,” he said.

In Brussels, Nato secretary general Anders Fogh Rasmussen welcomed the declaration and said Nato’s mission in Libya “is very close to completion”, referring to the alliance’s decision to end air patrols on October 31.

In Libya, leaders have said a new interim government is to be formed within a month, following by elections for a constitutional assembly within eight months. Elections for a parliament and president would follow in the year after that.

The NTC launched a roadmap to a new Libya with a 20-month countdown to a general election.

The NTC published the roadmap in August under which it will hand over power to an elected assembly within eight months and a Constitution will be drawn up.

The 37-article “constitutional declaration” covers 10 pages and details the main stages of a transition from the four-decade rule of Gaddafi.

The immediate first stage is for the NTC to transfer its base from the rebel bastion of Benghazi in eastern Libya, birthplace of the anti-Gaddafi revolution and where liberation was announced Sunday, to the capital Tripoli in the west.

Within a month, the NTC under the roadmap is to appoint a transitional government to run the country. Its chairperson Mustafa Abdel Jalil on Monday set a two-week target for its formation.

The government is to organise within eight months the election of a 200-member transitional assembly, or “general national congress.”

The NTC, which was formed in Benghazi in late February, will step down once the congress, taking over as the legitimate representative of the Libyan people, holds its first session.

The congress will have up to two months to name a prime minister, whose newly-formed government will be put to a confidence vote and form a commission to draw up a constitution.

One month later, the constitution will be put to a referendum. If it is adopted, the congress has 30 days to draw up an electoral law and polls are to be held within six months.

The congress will have 30 days to approve the results of the election and another 30 days to convene an elected parliament, formally ending the transition period.

Gaddafi’s body remained on display Sunday in a produce locker in the port city of Misrata, which suffered from a weeks-long bloody siege by regime forces in the spring. People have lined up since Friday to view the body, which was laid out on a mattress on the freezer floor. The bodies of Gaddafi’s son Muatassim and his ex-defence minister Abu Bakr Younis also were put on display, and people wearing surgical masks filed past, snapping photos of the bodies.

It remains unclear what happened between the time Gaddafi was captured alive in Sirte on Thursday and arrived dead in Misrata. Libyan leaders say he was killed in crossfire during battles for Sirte, but revolutionaries who were present for Gaddafi’s capture — and even one who was in the ambulance with him – said nothing about additional fighting in interviews.

Circumstances of Gaddafi’s death
Dr Othman al-Zintani, Libya’s chief forensic pathologist, said he performed an autopsy that confirmed that Gaddafi was killed by a gunshot to the head. That finding did not clear up the circumstances of his death, and al-Zintani said he could not elaborate until a full report has been sent to the attorney general.

Al-Zintani said that Gaddafi’s body was removed from the freezer and taken to a secret location for the autopsy. He said he also examined the body of Muatassim.

In new testimony late on Sunday, two fighters said revolutionary forces encountered heavy resistance from Gaddafi loyalists near the drainage tunnel where Gaddafi and others were hiding.

Omar al-Shibani, commander of a group of fighters involved in the capture, said one of his men found the wounded Gaddafi in the tunnel, disarmed him, pulled him out and walked him to one of the fighters’ vehicles.

Another fighter at the scene, Jibril Othman, said it was difficult for Gaddafi to stand. According to both accounts, the fighters put Gaddafi on the hood of the vehicle, and drove with him for some distance. Othman said a crowd gathered, and that he and others were beating Gaddafi.

Othman said that when Gaddafi was eventually placed in an ambulance, he had not yet suffered a shot to the head. Al-Shibani said Gaddafi had been shot in the abdomen and suffered a head injury, but that he “was fine up to that point”.

Execution
The New York-based group Human Rights Watch, which viewed the bodies, said video footage, photos and other information it obtained indicate that Muammar and Muatassim Gaddafi “might have been executed after being detained”.

“Finding out how they died matters,” said Sarah Leah Whitson of Human Rights Watch. “It will set the tone for whether the new Libya will be ruled by law or by summary violence.”

Mahmoud Jibril, the acting Libyan prime minister, said he would not oppose an inquiry into Gaddafi’s death, but added that there is “no reason” to doubt the credibility of an official report that he died in crossfire.

Addressing the celebrations around Gaddafi’s body, Jibril told the BBC in an interview on Sunday: “You have to appreciate the agony that people went through for 42 years.” — Sapa-AP, AFP