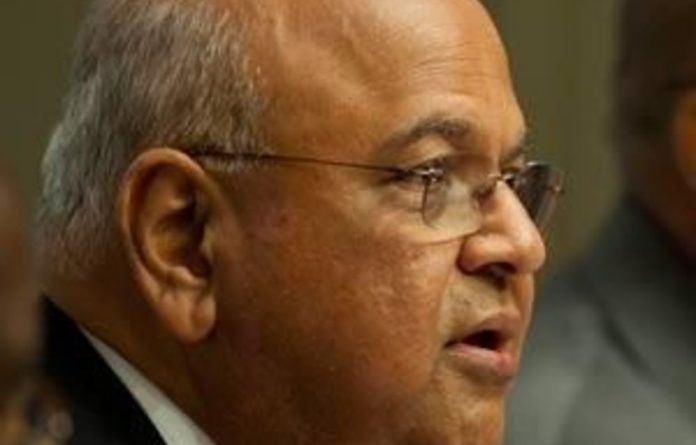 Congress of the People spokesperson Nic Koornhof, said the deficit prediction of 5.5% of gross domestic produce — slightly up from the February estimate — was “nothing to worry about”, as the 3.3% deficit forecast for 2014/15 sent a strong signal.

Cope welcomed a shift in the composition of public spending, the emphasis on promoting industrial and economic development, housing, urban infrastructure, and employment programmes.

The R25-billion to assist industry to be more competitive over the next six years was also welcomed.

Koornhof said Cope was concerned about the rand’s volatility.

“This can only be countered by strong fiscal responsibility and political leadership. We welcome this indication given in the MTBPS,” he said.

The level of household debt — at 75.9% of disposable income –was still too high. There seemed to be no impetus from this sector to bolster economic growth, he said.

The sluggish labour market was a matter of concern.

The Democratic Alliance’s Dion George said Gordhan missed an opportunity to signal government’s commitment to “cutting the fat” and improving people’s lives by growing the economy and creating an environment conducive to job creation.

“We needed more detail on how government plans to tackle unemployment, cut wasteful expenditure, fund improvements in the quality of the public healthcare sector, and more efficiently manage our public finances.”

Among other things, Gordhan had again failed to give a clear timeline for implementing the youth wage subsidy, George said.

“There are seven million South Africans who are not able to find a job, and a wage subsidy alone can start addressing the problem by helping to create 400 000 new jobs.”

The minister presented a realistic picture of the difficult economic circumstances.

“Yet his future projections, on which his financial management plan is based, may well prove to be very optimistic.

“It could therefore result in extreme difficulty in keeping the deficit under control.”

All in all, the MTBPS was a mixed bag, he said.

The problem was that Gordhan did not adequately address the core economic problem — fuelling faster growth and job creation, George said.

Progressive
The ANC congratulated Gordhan and government for “this well though[t], progressive, and inclusive budget statement with a thought of the majority of our people at heart”.

“The ANC hails this budget statement as the epitome of alleviating the economic hardships that the majority of our people experience,” spokesperson Jackson Mthembu said.

“Bearing this in mind, we welcome the finance minister’s announcements in his medium-term budget policy statement,” he said.

Steve Swart of the African Christian Democratic Party said Gordhan had not departed from government’s prudent, yet expansionary and counter-cyclical fiscal policy.

The minister stuck to this approach despite uncertainty prevailing in the United States and sovereign debt fears in eurozone countries,

But, the ACDP was concerned over the budget deficit, with debt service costs rising to R115-billion in 2014/15 to service a net loan debt of R1.3-trillion.

Freedom Front Plus leader Pieter Mulder said Gordhan was “becoming desperate in his attempts to balance the books of the state”.

“It is most probably because the fiscal options which the minister has at his disposal have been exhausted.”

Mulder welcomed Gordhan’s consistent demand that greater financial discipline in the public service was required and that wasting money could not continue.

“Busa sees the overall message of the ‘mini-budget’, given by Gordhan today, as positive for business confidence.”

Busa said in a statement it was pleased with Gordhan’s realistic assessment of the South African economy.

“We welcome in particular the minister’s identification of the central thrust of our economic policy challenge as ‘to support competitiveness and promote the kinds of structural change that will lead to more rapid, inclusive growth’ …”

“Busa is particularly pleased at the emphasis placed … on the need for enterprise development, especially of small and emerging business.”

The change of emphasis away from expenditure on government consumption to more efficient investment in job-creating assets such as infrastructure was correct.

“The impact of infrastructural spending on growth and jobs would be accelerated if greater use was made of public private sector partnerships to strengthen delivery,” Busa said.

“Busa particularly welcomes the emphasis which the finance minister has placed on enhancing infrastructural spending at local government level.” — Sapa