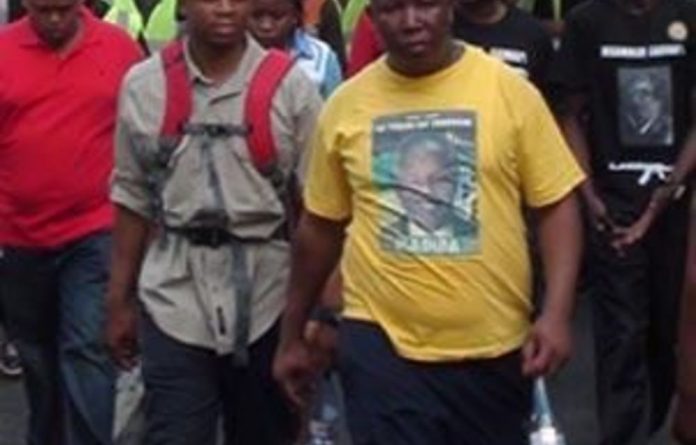 At dusk on Thursday, thousands of marchers in Sandton contemplated whether to continue their economic march to freedom to Pretoria on foot.

After handing a memorandum of grievances to the Johannesburg Stock Exchange, marchers briefly rested, before a large crowd continued walking. They had about 60km ahead of them.

Other participants boarded buses, while many people dispersed. The crowd had begun gathering from 5am in Beyers Naude Square in the Johannesburg CBD. They only began walking at noon, four hours later than planned due to transport problems.

Their first stop was the Chamber of Mines in the Johannesburg CBD where they handed a memorandum to chamber CEO Bheki Sibiya. Sibiya told reporters the chamber would apply its mind to the content of the document.

“We will distribute it [memorandum] to our 55 members.”

The league wanted the nationalisation of mines and the introduction of probation programmes within companies to give youth skills in mining.

The memorandum calls for better wages for mine workers and the active involvement of mining companies in the development of the industry.

After spending 20 minutes at the chamber’s offices, the marchers headed to the JSE, about 18km away.

“Take your time and walk. We have the whole day and night. You must not run,” he said.

“We [the leadership] are coming to march with you because we are all from poor backgrounds.”

They stopped to wait for a water tanker as several people were dehydrated and at least five people had fainted.

Participants no longer sang and danced, but shuffled along in the heat.

Some of the placards carried by marchers read: “The real freedom is economic not parliamentary. Free my people.”

Others read: “90% of the economy is still in the hands of the minority” and “Malema we must stand by you through thick and thin”.

Juice and water were handed out as marchers reached the Rosebank Zone shopping mall, where supporters resumed singing and dancing.

The group reached the JSE just after 5pm where Malema chanted: “Down with white capital monopoly. The people who are stealing our wealth must come on stage,” he said.

An official from the JSE received the memorandum from Malema, saying only: “Thank you for the opportunity. We will take your demands to the executive.”

In response the crowd sang Dubul’ibhunu (shoot the boer), which has been declared hate speech by a court.

The content of the memorandum was not immediately known.

Police and a private security company hired by the youth league kept a watch over proceedings. — Sapa