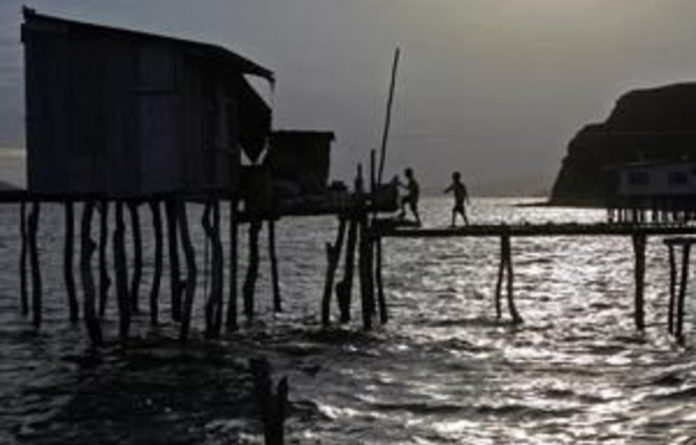 Tiny fish flashed across the bows of our yellow kayaks as we paddled across a tropical sea. Our destination was a sliver of white sand with a topknot of pines.

Beaching the kayaks, we found four outriggers and some lads sitting round a campfire. They showed off their catch of red emperor and coral trout. It was a feast fit for a queen, appropriate as it was the Queen’s birthday, a public holiday in this remote corner of the former British Empire, Papua New Guinea’s New Ireland province.

Today, its only tourists are a few adventurous surfers, divers and fishermen. But 100 years or more ago, it was a destination for missionaries, who decided to share their beliefs with the easy-going locals, who obligingly incorporated Christianity into their Malagan culture, with its carved masks and elaborate funerals.

I was there with my husband and three teenage daughters to explore a group of coral atolls off the main island of New Ireland. Our 40km kayaking trip was a new offering from Australian-owned No Roads Expeditions. Working with the local tourist board, PNG Tourism, No Roads has provided each village on the itinerary with a new water tank and pays them for food and entertainment. Three local trainee guides, Gabriel, Allan and Lapin, came along to learn the ropes.

We flew to Port Moresby, PNG’s capital, and on to Kavieng, a crumbling copra port on New Ireland. But this just made Nusa Island Retreat, a pretty eco-resort five minutes away by boat, with beach bungalows and a bar on the sand, all the more perfect.

Next day, we paddled across water in more shades of blue than Eskimos have words for snow to Enuk, 8km to the south. Under a palm-frond shelter the village women presented a lunch of parrotfish, fried plantains and rice. The menfolk watched from the shade, machetes at their sides.

A few more kilometres of paddling took us to Kabotteron. While the crew set up our tents, my eldest daughter Alice and I swapped our plastic kayaks for a dugout, carved from a tree trunk. We soon tipped into the water, to a chorus of giggles. There was no running water, so we doused ourselves with buckets; a freshly dug pit toilet was beautifully screened with pandana leaves. This set the pattern for the trip: we’d paddle morning and afternoon with stops for snorkelling around reefs.

On Kulinos, our sleeping quarters were on the veranda of the minister’s house. It was Sunday and a large wooden drum called everyone to the mint-green, dirt-floored Seventh-day Adventist church. The minister, Sion Sionakis, welcomed us in English as honoured guests: “For some people it is the first time they have seen white people and we are very glad.”
That evening, young men with white-painted torsos performed a traditional sing-sing to drums and guitars and children chanted stories about fishing.

A tribute to hospitality
Next morning, we attempted our own hastily practised farewell song, a paltry but heartfelt tribute to their hospitality. Lapin was dying to show us his home, Nusakelo. “I love my island — the beach, the orchard and vegetable garden, the reef,” he said quietly. “Can you believe an American found Nusakelo on Google Maps and tried to buy it for $70 000? We said no, because we want to keep it the way it is.”

On Laminlagit, we held outrigger races with village teenagers, then feasted on watermelon, damper and mud crabs. Our daughter Julia found a guitar and sang to adoring children as fireflies pricked the darkness.

At our final destination, Tsoilik, at the tip of the island chain, a pretty guest house offered real beds, a solar shower and flushing toilets. These were unexpected treats, but nothing to the thrill of racing hermit crab with the local kids as dusk fell and spear fishermen on outriggers were silhouetted against a flaming sky. —